Question 1 What are the main organs of human respiratory system?

Question 3 What is yawning? what are the various situations under which yawning occurs?

Question 4 Why do we sneeze when we inhale a lot of dust particles ?

Question 5 Why do mountaineers carry oxygen gas cylinders with them?

Question 6 What is the function of haemoglobin in blood?

The main organs of human respiratory system are: Nose, Nasal passages (Passages in the nose), Trachea, Bronchi, Lungs and Diaphragm. 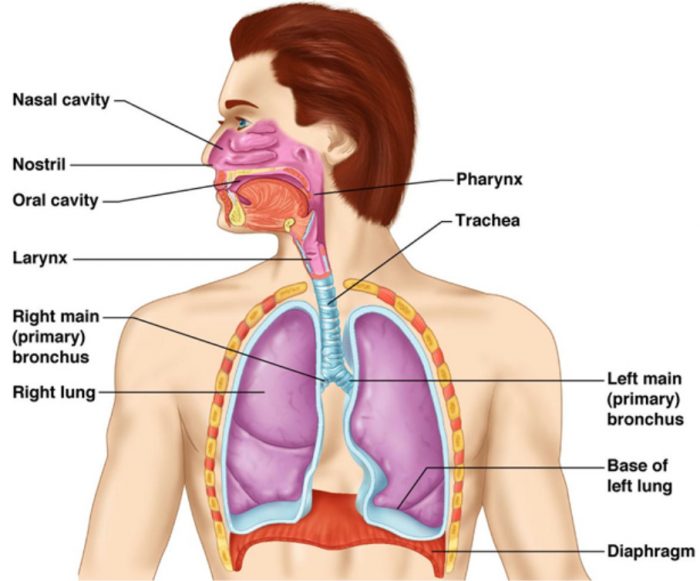 (1) Our nose has two holes which are called nostrils.

(2) There is a passage in the nose behind the nostrils. This is called nasal passage (or nasal cavity)

(3) The nasal passage joins the nostrils to the trachea.

(4) The trachea is a tube which is also called windpipe.

(5) The upper end of trachea has a voice box called larynx. The trachea (or windpipe) branches into two smaller tubes called bronchi at its lower end.

(6) The two bronchi are connected to the two lungs-one to the left lung and other to the right lung.

(7) Each bronchus divides in the lungs to form a large number of still smaller tubes called bronchioles.

(9) The diaphragm is a curved sheet of muscle below the lungs.

(b) When we breathe out air, then the chest cavity contracts. This contraction movement of the chest helps in squeezing out carbon dioxide from the walls of the lungs and expelling it from the body.

We breathe in air through the nose. The air enters the nostrils, passes through the nasal passage, larynx, trachea, bronchi, and finally reaches the lungs. In the lungs, air passes through a large number of small tubes called bronchioles and then reaches the tiny air sacs called alveoli. The alveoli are surrounded by very thin blood vessels called capillaries which cary blood in them. The oxygen of air diffuses out from the alveoli into the blood in the capillaries. The blood carries oxygen to all the parts of the body. This oxygen is carried by a red pigment called haemoglobin present in the red blood cells

The sudden expulsion of air from the nose due to the irritation of nasal passage, is called sneezing.

The action of opening one’s mouth wide while taking a long and deep breath of air (without any control over it) is called yawning.

A person yawns when he is tired, bored, stressed, over-worked, feeling sleepy or drows.

Yawning is caused by insufficient oxygen in the body. When we are tired, bored, stressed, over-worked, feel sleepy or drowsy, we do not breathe as deeply as we normally do and hence our breathing rate slows down. Due to slower breathing rate, less oxygen (of air) goes into our body which is insufficient for respiration (production of energy). Yawning helps in bringing more oxygen into our blood because during yawning our mouth opens wide and we take a long and deep breath of air.

Smoking tobacco in the form of beedi , cigarette or cigar damages our lungs gradually and causes ill health. Smoking sends tobacco smoke inside the body. The chemicals present in tobacco smoke damage the lungs in many ways.

Some of the harmful effects of smoking are as follows:

(1) Smoking destroys the lung tissue gradually due to which breathing becomes very difficult.