Question 1 What is meant by breathing?

Question 2 Why does running make a person breathe faster?

Question 3 Why does an athlete breathe faster and deeper than usual even after finishing the race?

Question 4 Why do we feel hungry after a heavy physical exercise?

Question 5 What would happen if a potted plant is over watered for a long time? Explain?

Question 9 Explain why , when we exhale air from our mouth on to mirror, a patch of moisture is formed on the mirror surface?

Question 10 What is meant by inhalation and exhalation?

Question 12 Describe the mechanism of breathing in humans?

Breathing is the process by which air rich in oxygen is taken inside the body of an organism and air rich in carbon dioxide is expelled from the body (with the help of breathing organs). Different organisms have different organs for breathing.

The breathing in human beings takes place through the organs called lungs.

A breath means one inhalation plus one exhalation.

Breathing is a continuous process which goes on all the time and throughout our life and that of other animals as well as plants.

The mountaineers carry oxygen cylinders with them for breathing because the amount of air available to a person for breathing at high altitude is much less than that available on the ground.

The number of times person breathes in one minute is called breathing rate.

The average breathing rate in an adult human being at rest is 15-18 times per minute. Women breathe slightly faster than men.

The breathing rate of a person changes according to the oxygen requirements of the body.

1) The breathing rate of a person is the slowest when he is sleeping because minimum energy is required by the body during sleep which can be provided by a slow rate of breathing.

2) The breathing rate of a person increases with increased physical activity (like exercise, running, weightlifting, etc.). When the breathing rate increases, greater amount of air goes into the lungs. With more air going into the lungs, the blood can absorb oxygen at a faster rate. Thus, faster breathing supplies more oxygen to the body cells for producing more energy (by the rapid breakdown of food) needed for doing heavy physical exercise, etc.

When we run , we also take deep breaths so as to inhale more air (and get more oxygen) for the speedy release of energy from food. Athlete breathes faster and deeper than usual even after finishing a race. This is because during the race, the leg muscles of athlete have produced extra energy by doing anaerobic respiration (without using oxygen). By breathing faster and deeper, the athlete is giving back oxygen to the muscles which it could not give earlier at the time of running.

Children breathe about 20 to 30 times per minute

The process of breathing takes place in our lungs.

(1) Lungs are connected to our nostrils (holes in the nose) through nasal passage (or nasal cavity) and windpipe.

(2) When we inhale air, it enters our nostrils , passes through nasal passage and windpipe, and reaches our lungs.

(3) Our two lungs hang in an airtight space in our body called chest cavity.

(4) Around the sides of the chest cavity is the rib cage with sheets of muscles between the ribs.

(5)The rib cage encloses the lungs in it.At the bottom of the chest cavity is a curved sheet of muscle called diaphragm .

(6) Breathing involves the movements of the rib cage and the diaphragm. 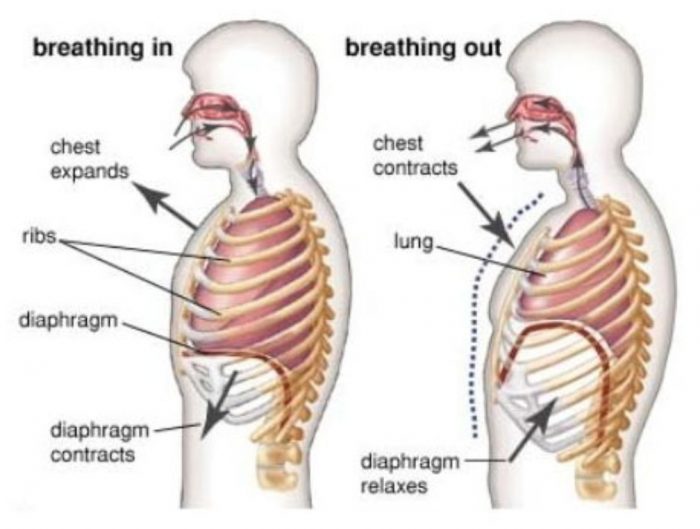 (a) Breathing in: When we breathe in (or inhale), then two things happen at the same time

(1) The muscles between the ribs contract causing the rib cage to move upward and outward, and

(2) the diaphragm contracts and moves downward.

(b) Breathing out: When we breathe out (or exhale), then two things happen at the same time

(2) the diaphragm relaxes and moves upward.

Different people can expand their chest by different amounts. 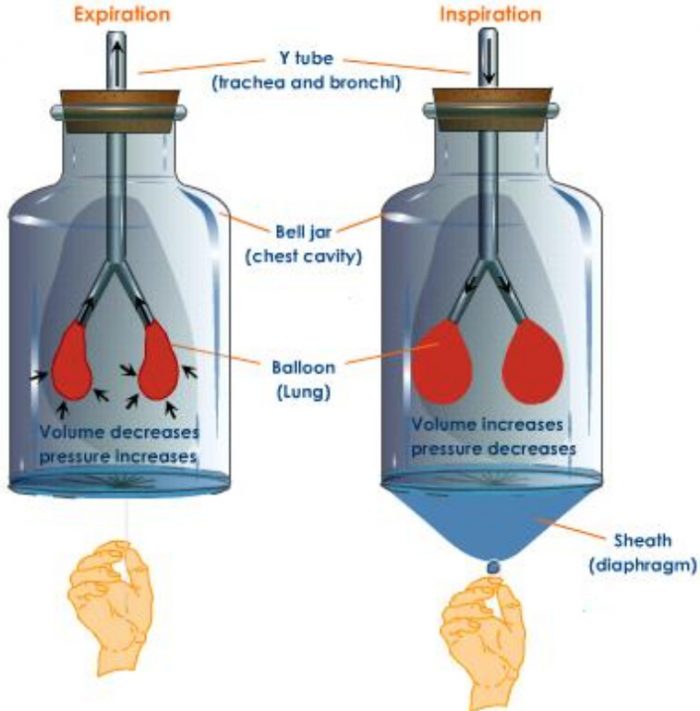 (1) To show the process of breathing in air, we pull the rubber sheet downwards. In this case, the space in the bell jar increases, lowering the air pressure inside the bell jar. The air from outside rushes in through the tube into balloons due to which the balloons get inflated (their size increases).This shows the action of diaphragm during inhaling of air.

(2) To show the process of breathing out of air, we release the rubber sheet. In this case, the space in the bell jar decreases. The air from inside the balloons goes out through the tube due to which the balloons get deflated (their size decreases). This shows the action of diaphragm during exhaling of air.

Air Which We Breathe During Respiration

The only difference in the inhaled air and exhaled air is that they contain different proportions of oxygen, carbon dioxide and water vapour.

(2) The Case of Carbon Dioxide: The air which we inhale contains a lower proportion of carbon dioxide. Now, during respiration when oxygen breaks down glucose food, then some carbon dioxide is produced. Thus, exhaled air contains more carbon dioxide than inhaled air.

(3) The Case of Water Vapour: The air which we inhale contains only a little of water vapour. When glucose (food) is broken down by oxygen during respiration, then water is also produced (along with carbon dioxide). So, the exhaled air contains a lot more water vapour than inhaled air.