Question 2 What is meant by unisexual flowers? Give examples?

Question 3 What is meant by bisexual flowers? Give examples?

Question 4 What are the stamen and pistil in a flower?

Question 5 What is the function of sepals and petals in flower?

The plants that have flowers are called flowering plants. Most of the flowering plants reproduce by sexual reproduction method involving the fusion of sex cells called gametes.

Flowers are the reproductive parts of a plant. Flowers contain the sexual reproductive organs of a plant. The function of a flower is to make male and female gametes, and to ensure that fertilisation will take place to make seeds for growing new plants.

The sexual reproduction in plants involves the fusion (combination) of male and female gametes of the plant which leads to the formation of the seeds of the plant. These seeds can then be used to grow new plants. 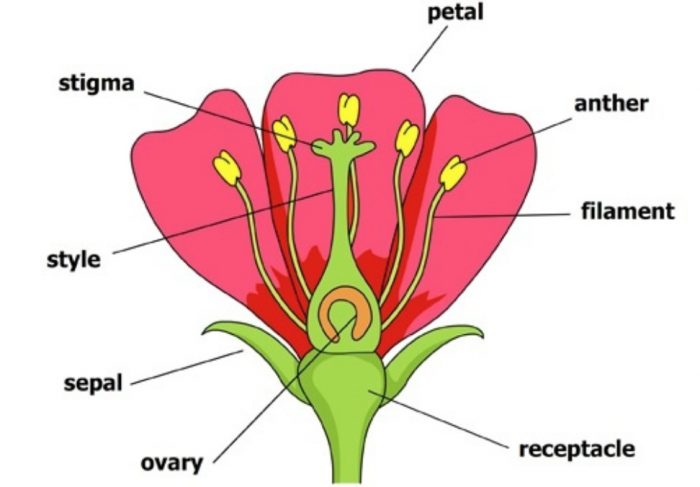 The main parts of a flower are : Receptacle, Sepals, Petals, Stamen and Pistil.

The base of a flower to which all the parts of a flower are attached is called receptacle.

The green, leaf-like parts in the outermost circle of a flower are called sepals .All the sepals taken together are called calyx. The function of sepals (or calyx) is to protect the flower in its initial stages when it is in the form of a flower bud.

The colourful parts of a flower are called petals. The petals lie inside the sepals. All the petals taken together are called ‘corolla. The petals are usually scented. The function of petals is to attract insects (for pollination) and to protect the reproductive organs which are at the centre of the flower.

In the centre of a flower, there is a flask-shaped organ called pistil. Pistil is the female reproductive organ of the plant. A pistil, is made of three parts : stigma, style and ovary.

The top part of pistil is called stigma. Stigma is for receiving the pollen grains from the anther of stamen (during pollination).

The middle part of pistil is called style. Style is a tube which connects stigma to the ovary.

Male and female reproductive organs of a plant may be present in the same flower or in different flowers. Depending on this, a flower may be unisexual or bisexual.

The plants such as papaya, watermelon, corn, and cucumber have unisexual flowers.

The plants such as rose, mustard, Hibiscus and petunia have bisexual Flower.