You are here: Home / Class 7 / Science / Reproduction in Plants / Pollination and Fertilisation

Question 2 Name three agents which can carry out pollination?

Question 4 How do insects help in pollination?

Question 5 how do wind help in pollination?

Question 6 How do water help in pollination?

Question 7 What is meant by fertilisation?

Question 8 How does the process of fertilisation take place in flowers?

Question 10 Explain how formation of fruits and seeds take place?

The transfer of pollen grains from the anther of a stamen to the stigma of a pistil is called pollination.

(1) When the pollen grains from the anther of a flower are transferred to the stigma of the same flower (or another flower on the same plant), it is called self-pollination. 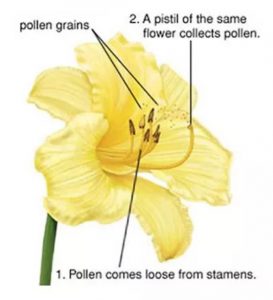 (2) When the pollen grains from the anther of a flower on one plant are transferred to the stigma of a flower on another similar plant, it is called cross-pollination. 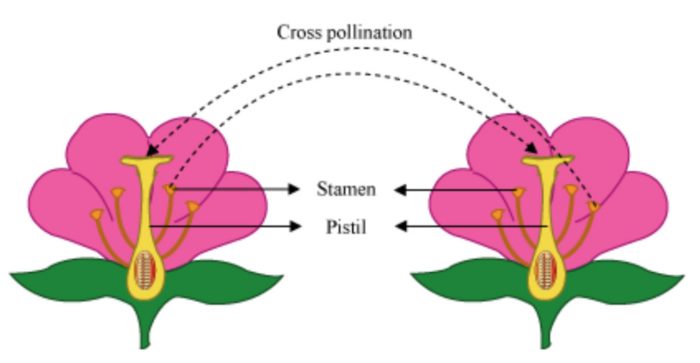 Pollination is done by insects, wind and water.

Pollination is done by insects such as bees and butterflies. The insects carry pollen from flower to flower and help in pollination. Certain flowers have nectary near their base which contains a sugary liquid called nectar. When an insect sits on the flower of a plant for sucking nectar, then the pollen grains from the anther of this flower stick to its body. And when this insect now sits on another flower to suck nectar, then the pollen grains sticking to its body are transferred to the stigma of this second flower.

The insect pollinated flowers are of the plants such as : sunflower, marigold, Bougainvillea, jasmine, banana, and banyan, etc.

Some of the wind-pollinated flowers are in the plants such as grass, maize, rice, sugarcane, bamboo and palms. 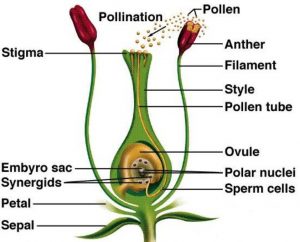 Formation of Fruits and Seeds

After fertilisation, the ovule present in ovary grows to become a seed. The seed contains embryo (baby plant) and food for developing new plant. There is a tough protective coating around the seed which is called seed coat. All the ovules present in the ovary of a flower get fertilised by pollen grains and grow to become seeds. Thus, the ovary of a flower may give rise to a number of seeds.

Apples, oranges, mangoes, plums, lemons, tomatoes, pea pods, almonds, peanuts, and walnuts, are all fruits. They all have seeds inside them.

The process in which a seed begins to grow is called germination. When a seed germinates, the seed coat splits, a tiny root grows downward and a shoot grows upwards. This produces a seedling of the plant. The seedling grows further and ultimately forms a new plant. After a certain period, the plant bears flowers. These flowers again produce fruits and seeds.