You are here: Home / Class 7 / Science / Reproduction in Plants / Dispersal of Seeds And Fruits

Question 1 What is meant by dispersal of seeds?

Question 2 How do plants benefit from seed dispersal?

Question 3 Name three agents which help in the dispersal of seeds and fruits?

Dispersal Of Seeds and Fruits

Dispersal of seeds means to scatter seeds over a wide area. The seeds of some of the plants such (as seeds) but the seeds of other plants disperse in the form of fruits (because fruits contain seeds inside them).

When the seeds become mature, then the whole fruit containing seeds or the individual seeds fall from the parent plant to the ground below. A plant produces many seeds. If all the seeds produced by a plant which fall directly underneath the plant germinate and grow there, then a large number of new plants would grow up close together in a small area of soil. The large number of new plants growing close together will compete with one another for water and minerals (from the soil), and sunlight, leading to shortage of water, minerals and sunlight. Due to insufficient water, minerals and sunlight, the newly growing plants will not be healthy and many plants would die.

In order to prevent overcrowding at the same place , the seeds and fruits of many plants have developed various ways which enable them to be carried a long distance away from the parent plant.When the seeds of a plant are dispersed, the new plants which grow from these seeds are far and wide and hence do not compete among themselves for water, minerals and sunlight.

(i) Seed dispersal prevents the overcrowding of plants in an area.

(ii) Seed dispersal prevents the competition for water, minerals and sunlight among the same kind of plants.

How seeds and fruits are dispersed 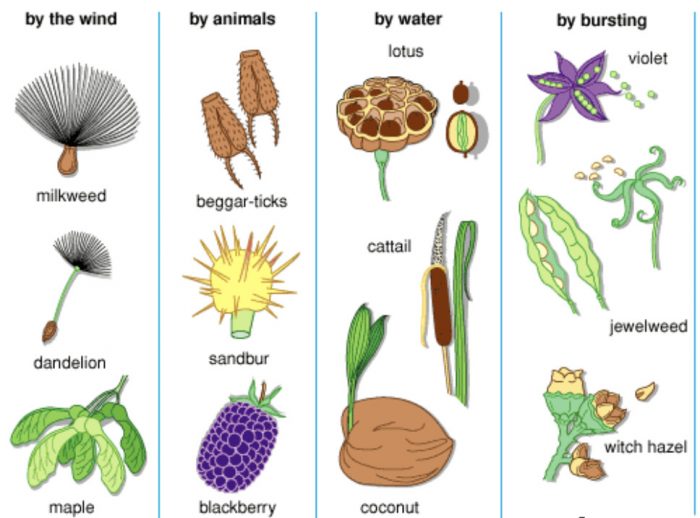 The main agents for the dispersal of seeds and fruits are wind, water and animals.Some seeds are also dispersed by an explosive mechanism in which the ripe fruits of some plants burst on their own by making a little explosion and throw their seeds away from the plant with a great force.The various seeds and fruits have some special features in them due to which they are adapted to be carried away easily by wind, water or animals.

(1) Dispersal of Seeds and Fruits by Wind

The seeds and fruits dispersed by wind either have wing-like structures or they have hair or they are very small and light, which helps them to be easily carried away by the blowing wind.

(c) The plants like grass, orchids and Begonia have very small and light seeds which can be easily blown away by the wind for dispersal.

(2) Dispersal of Seeds and Fruits by Water

The seeds and fruits which are dispersed by water develop floating ability in the form of spongy or fibrous outer coats.

The seeds of water lily plant and coconut plant are dispersed by water.

The seeds of water lily plant have a spongy outer coat which allows them to float in water and move to other places along with water currents. The coconut fruits have a fibrous outer coat which enables them to float in water and carried away by flowing water to far off places. It is due to the dispersal of coconut fruits by sea-water that coconut trees grow in all the coastal areas.

(3) Dispersal of Seeds and Fruits by Animals

Some fruits develop hooks on their surface by which they get attached to the hairy bodies of the passing animals and carried away to distant places.

These fruits may be carried several kilometres by the moving animals before they are rubbed off from their body and fall to the ground. When the fruits are dispersed by an animal, the seeds present in them are automatically dispersed.

(4) Dispersal of Seeds by an Explosive Mechanism

When some fruits ripen, strain is set up in their walls until the fruits split into two halves (making a small explosion) and their seeds are thrown away from the plant with a great force in all directions. Thus, some seeds are dispersed when their fruits burst with a sudden jerk.