Question 1 What is meant by fragmentation? Name one plant which reproduce by this method?

Question 2 How does plants such as ferns and mosses reproduce?

Question 3 What is meant by budding? How yeast reproduce by this method?

Question 4 What is meant by spore formation?

In budding, a small part of the body of the parent plant grows out as a bulb-like projection called bud which then detaches and becomes a new plant.

Yeast is a non-green plant (which is a fungus). Yeast is a single-celled plant (or single-celled organism). Each single cell of yeast is a complete plant in itself. In yeast, first a bud appears on the outside of the cell wall. The nucleus of parent yeast cell then divides into two parts and one part of the nucleus moves into the bud .The bud separates off from the parent yeast cell and forms a new yeast cell (or new yeast plant).The budding in yeast, however, often takes place so fast that the first buds start forming their own buds and all of them remain attached to the parent yeast cell forming a chain of yeast cells. After some time, all the yeast cells of the chain separate from one another and form individual yeast plants. The new yeast cells grow, mature and produce more yeast cells. If this process continues, then a large number of yeast cells (or yeast plants) are produced in a short time

The breaking up of the body of the parent plant in two or more pieces on maturing , each of which subsequently grows to form a new plant, is called fragmentation.

Many times we see slimy, green patches in ponds or in other stagnant water bodies such as lakes, etc. The green patches are due to the growth of plant-like organisms called algae. An alga reproduces by the asexual method of fragmentation. When an alga matures, it breaks up into two (or more) fragments. Each fragment of alga then grows to form new algae. This process of reproduction of alga by fragmentation continues due to which a large number of algae are produced in a short period of time which cover a large area of water in the pond. So, when water and nutrients are available, algae grow and multiply rapidly by the process of fragmentation.

An example of common alga is Spirogyra. Spirogyra is a green, filamentous alga plant which is found in ponds, lakes and slow moving streams. Spirogyra reproduces by the asexual method of reproduction called fragmentation.When Spirogyra becomes mature, its filament (body) simply breaks into two or more fragments on its own, and each fragment then grows into a new Spirogyra. This break up of the filamentous body of Spirogyra brings about its asexual reproduction. 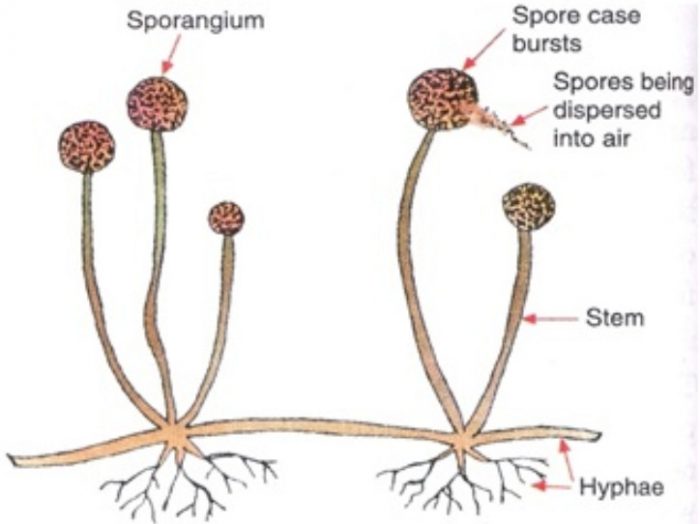 Spores are the asexual reproductive bodies. Spores are not seeds. In the spore formation method of reproduction, the parent plant produces hundreds of tiny spores in spore cases. When the spore case of the plant bursts, then the spores spread into air. As the spores are very light, they keep floating in air and carried over large distances by air. Each spore is covered by a hard, protective coat to withstand unfavourable conditions şuch as high temperature and low humidity. Due to this, spores can survive for a long time. When the air-borne spores land on food (or soil) under favourable conditions (like damp and warm conditions), they germinate and produce new plants.

Most of the fungi, and flowerless plants (such as ferns and mosses) reproduce asexually by means of spores. Bread mould plant which grows on a piece of stale bread is a fungus (whose scientific name is Rhizopus). The common bread mould plant (or Rhizopus fungus) reproduces by the method of spore formation.

The common bread mould plant consists of fine, thread-like projections called hyphae and thin stems having knob-like structures called sporangia at the top. Each sporangium contains hundreds of minute spores enclosed in a spore case. When the spore case bursts, the tiny spores are dispersed in air. These spores are the asexual reproductive bodies of bread mould plant which can produce more bread mould plants under suitable conditions.

The plants such as ferns and mosses also reproduce by means of spores.