Question 1 What is meant by reproduction? Name the two methods of reproduction in plants?

Question 5 Describe the cutting method for the propagation  of plants?

Question 6 how do Bryophyllum plants reproduce?

Question 10 What are terminal and axillary buds?

All the living things are called organisms.

The production of new organisms from the existing organisms of the same species is called reproduction.

Methods of reproduction in plants

There are different methods (or modes) of reproduction in plants.

Some of the plants which can be produced by asexual reproduction methods (without seeds) are: rose, potato, ginger,  turmeric, sweet potato, Dahlia, sugarcane, Bryophyllum and cactus.

Some of the plants which are produced by sexual reproduction method (from seeds) are : wheat, gram (chana), maize (makka), peas, paddy (rice), sunflower, mustard, cotton, and drumstick

The asexual reproduction in plants can take place by the following methods:

Node: Node is a point on the stem (or branch) of a plant where a leaf is attached. Buds are also present in the node regions of a plant.

Axil: Axil is the upper angle between a leaf stalk and the stem (or branch) from which it is growing.

Bud: Bud is a compact, knob-like undeveloped shoot consisting of a shortened stem and immature overlapping leaves .Buds are the growing points of a plant.

1) The buds at the end of a stem or branch are called terminal buds.The terminal buds lead to the elongation (lengthening) of stem and branches. Terminal buds may also develop into flowers.

For example: vegetative buds are present on the modified, thickened roots of a sweet potato plant, and on the leaves of Bryophyllum plant. The stems, roots and leaves are called vegetative parts of a plant. 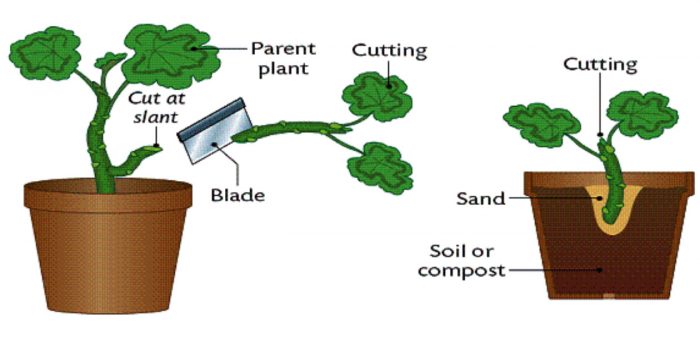 Some of the plants which are usually reproduced by the method of vegetative propagation are rose, champa (Magnolia), potato, ginger, turmeric, sweet potato, Dahlia, mint, sugarcane, banana, Bryophyllum, strawberry, Gladiolus, cactus and grapes.

(a) Vegetative Propagation by Stems

The stems (or branches) of plants normally bear buds in the axils which can be used in vegetative propagation to produce new plants. New plants can be obtained from the stem (or branch) of an existing plant by the method of cuttings. A small part of stem (or branch) of a plant which is removed by making a cut with a sharp knife, is called a cutting. While making a cutting, care should be taken to see that there are some buds on it.

The lower end of stem cutting is buried in the moist soil.The upper part of cutting having bud on it is kept above the ground. The cutting planted in soil is watered everyday. After a few days, the cutting develops roots. The bud grows and produces a shoot (branch with leaves)

The plants like rose, champa, grapes, sugarcane, bananas, Bougainvillea can be grown by cuttings method.

Money plant can also be grown by the cuttings method of vegetative propagation. We can grow money plant even in a jar of water by taking a stem cutting (with a node) from an existing money plant.

Advantage of the cuttings method is that by using this method we can produce many new plants from just one plant quickly, without waiting for flowers and seeds.

A tuber is the thickened underground stem (or root) of a plant which is swollen with stored food. The tuber has a number of buds. Each bud of the tuber can grow into a new plant when the old tuber (or its cutting) is planted in the soil in the next growing season.Tubers can be used as organs of vegetative propagation to produce new plants.

There are two types of tubers : stem tubers and root tubers. 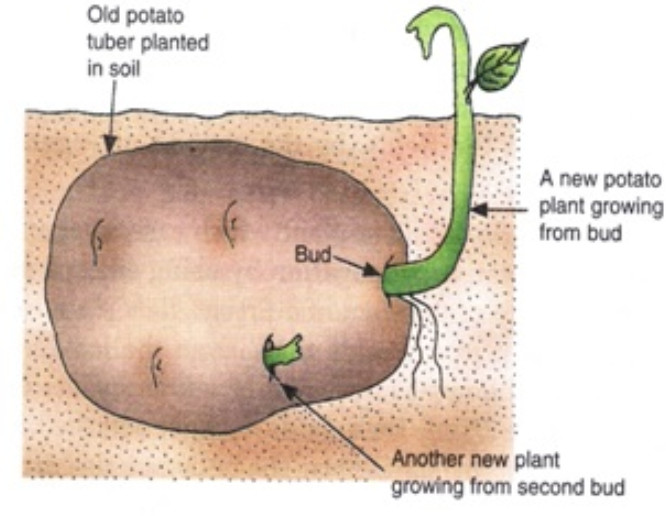 Potato is a stem tuber

(b) Vegetative Propagation by Roots

There are some plants which have modified, thickened roots which bear buds.

The leaves of some plants develop buds on them. Such leaves having buds can be used as structures of vegetative reproduction in plants.

A plant which can reproduce from its leaves is Bryophyllum (Bryophyllun is also called sprout leaf plant). The leaves of Bryophyllum plant develop some buds in its margins (or edges) When a mature leaf of the Bryophyllum plant falls on the ground, then each bud can grow into a new plant.

Another plant called Begonia also reproduces by vegetative propagation through its leaves. The Begonia plant which can grow into new plants when the leaves fall on the ground.

The plants such as cacti produce new plants when their parts get detached from the main body and fall on the ground (singular of cacti is cactus). Each detached part of a cactus plant which falls on ground can grow into a new plant.

Advantages of Vegetative Propagation Of Plants

1) The new plants produced by vegetative Propagation take much less time to grow and bear flowers and fruits as compared to the plants grown from seeds.