Question 2 What happens when an iron nail is kept immersed in copper sulphate solution?

Question 3 What happens when baking soda is added to vinegar? Give its chemical reaction?

Question 4 What happens when carbon dioxide is passed through lime water? Give the reactions involved?

Question 5 What happens when magnesium ribbon is burned in air? Name the type of changes which take place?

Question 6 What happens when magnesium oxide is dissolved in water? Write a word equation for this process?

Question 8 Why iron pipes carrying water are coated with zinc?

Question 9 Why are tools and machine parts made of iron smeared with grease or oil?

Question 10 Why rusting of iron objects is faster in coastal areas than in deserts?

Question 11 What is meant by galvanisation? Why is it done?

Question 12 What is a chemical change? Give few examples from everyday life?

Question 13 What is meant by crystallisation? How crystals of copper sulphate are prepared by this method?

Question 15 What is the importance of chemical changes?

Characteristics of a chemical change :

Souring of milk
Formation of curd from milk
Cooking of food (like rice and chapatis)
Spoilage of food
Change in colour of cut apple (cut brinjal or cut potato) on keeping in air
Photosynthesis
Digestion of food
Neutralisation reaction
Explosion of a firework (or cracker)
Burning of magnesium ribbon
Burning of fuels (like burning of wood, coal, kerosene, LPG and biogas)
Burning of dry leaves
Burning of candle wax
Burning of incense stick
Rusting of iron
Ripening of fruits
Reaction between vinegar and baking soda
Passing carbon dioxide gas through lime water (which produces calcium carbonate precipitate)
Reaction between copper sulphate solution and iron
Formation of manure (or compost) from leaves
Formation of biogas from animal wastes (like cow-dung).

When food gets spoiled, it produces a foul smell. This shows that new substances have been formed in the spoiled food which have foul smell. The spoilage of food is a chemical change.

The cut surface of an apple slice acquires a brown colour due to the formation of new substances by the action of oxygen (of air). So, the change in colour of a cut apple slice on keeping in air is due to a chemical change.

During photosynthesis, the plants combine carbon dioxide and water in the presence of chlorophyll and sunlight to form two new substances: glucose (food) and oxygen gas. Photosynthesis is a chemical change. In the process of digestion, the various food materials break down to form new substances which can be absorbed by the body. The process of digestion is a chemical change.

In a biogas plant, anaerobic bacteria digest (break down) the animal wastes (like cow-dung) and produce biogas whose major component is methane gas. The formation of biogas from animal wastes is a chemical change. 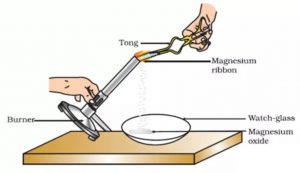 The new substance ‘magnesium hydroxide’ formed during this change is a base which turns red litmus paper to blue. The dissolving of magnesium oxide in water is a chemical change.

Reaction Between Baking Soda and Vinegar

Take about 10 mL vinegar in a test-tube and add a pinch of baking soda to it. We will hear a hissing sound and see the bubbles of carbon dioxide gas coming out and rising in the test-tube. 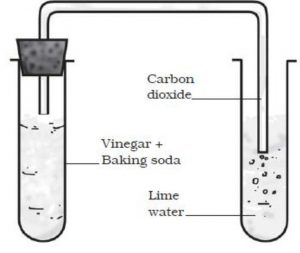 The reaction between lime water and carbon dioxide gas is a chemical change because a new
substance calcium carbonate is formed during this change.

The turning of lime water milky is used as a standard test for carbon dioxide gas. 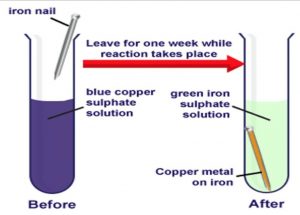 Importance of chemical changes are given below:

The same substance can undergo a physical change or a chemical change depending, upon the conditions.

A Protective Shield of Ozone

There is a layer of ozone gas high up in the atmosphere.

The ozone layer protects us from the harmful ultraviolet radiations which come from the sun.

Ozone absorbs ultraviolet radiations coming from the sun and breaks down to form oxygen. The breaking down of ozone into oxygen is a chemical change.

If ultraviolet radiations were not absorbed by ozone layer, they would reach the earth’s

surface and cause harm to us and other living things. Ultraviolet radiations can cause skin cancer, damage our eyes and plants.

When an iron object is left in damp air (or water) for a considerable time, it gets covered with a red-brown flaky substance called rust. This is called rusting of iron. During the rusting of iron, iron metal combines with the oxygen (of air) in the presence of water (moisture) to form a compound iron oxide. This iron oxide is rust.

Rust is iron oxide (Fe2O3). Thus, rust and iron are not the same substance. Rusting of iron is a chemical change.

Two conditions are necessary for the rusting of iron to take place:

(2) The presence of salt in water makes the process of rusting of iron faster. Thus, an iron object will rust much faster when kept in sea-water (which is salty water) than when kept in fresh water (having no salts dissolved in it).

Prevention of rusting of iron

(1) Rusting of iron can be prevented by painting

When a coat of paint is applied to the surface of an iron object, then air and moisture cannot come in contact with the iron object and hence no rusting takes place. The window grills, railings, steel furniture, iron bridges, railway coaches, and bodies of cars, buses and trucks, are all painted regularly to protect them from rusting.

When some grease or oil is applied to the surface of an iron object, then air and moisture cannot come in contact with it and hence rusting is prevented.

The tools and machine parts made of iron and steel are smeared with grease or oil to prevent their rusting.

(3) Rusting of iron can be prevented by galvanisation

The process of depositing a thin layer (or coating) of zinc metal on iron objects is called galvanisation.

Galvanisation is done by dipping an iron object in molten zinc metal. A thin layer of zinc metal formed on the surface of an iron object protects it from rusting (because zinc metal remains unaffected by air and moisture). The iron sheets used for making buckets, drums, dust-bins and sheds (roofs) are galvanised to prevent their rusting. The iron pipes used in our homes to carry water are also galvanised to prevent rusting.

(4) Iron is coated with chromium to prevent rusting

This is called chrome-plating. Chromium metal is resistant to the action of air and moisture. So, when a layer of chromium is deposited on an iron object, then the iron object is protected from rusting.

Chromium-plating is done on steel furniture, taps, bicycle handle bars and car bumpers, etc, made of iron and steel to prevent them from rusting.

Cooking utensils, knives, scissors and surgical instruments are made of stainless steel and do not rust at all.

The process of evaporation (to dryness) is not a good technique of separation because:

(1) The soluble impurities do not get removed in the process of evaporation of a salt solution. So, the salt obtained by evaporation is not pure.

(2) The crystals of salts obtained by the process of evaporation are small. And the shape of crystals cannot be seen clearly.

Large crystals of pure substances can be obtained from their solutions by the process of Crystallisation.

Crystallisation is an example of a physical change.