Question 1 What are ruminants?

Question 2 Name the type of carbohydrates that can be digested by ruminants but not by human. Give the reason?

Question 3 What is meant by rumination?

Question 4 Explain why  a cow can digest grass but we cannot?

Question 5 Can we survive on green leafy vegetables? Give reason for your answer?

Question 6 What type of micro-organism digest cellulose carbohydrate present in the grass food of a ruminant?

Question 7 Describe with the help of a labelled diagram, how digestion of food take place in amoeba

Question 8 What is an amoeba? What is the similarity and difference between the nutrition in amoeba and human beings?

Question 9 What is the function of pseudopodia?

Some Animals Eat Grass as Food

The herbivorous animals eat mainly grass and other plant leaves as food. Grass is rich in a carbohydrate called cellulose (which acts a source of energy).

The cellulose carbohydrate present in grass can be digested by the action of certain bacteria which are present only in the stomach of animals called ruminants like cattle (cows, buffaloes) goat, sheep, deer, antelope, giraffe. 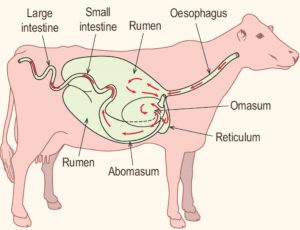 1) The animals (such as cow) which eat grass have a special stomach to digest the tough cellulose carbohydrate present in grass.

2) The stomach of a cow is large and consists of four compartments (or four chambers).The first compartment of a cow’s stomach is the biggest and it is called rumen.

3) When cow eats grass as food while grazing, it does net chew it completely (because it has no time for it). The cow swallows the grass quickly with little chewing and stores it in the rumen (which is the first compartment of stomach).

After some time, when the cow is resting, the cud from rumen is brought back to the mouth of cow in small amounts at a time. The cow now chews the cud thoroughly. This is why many times we see a cow (or buffalo) moving its jaws from side to side and chewing continuously even when it is not eating grass.

The process by which the cud (partially digested food) is brought back from the stomach to the mouth of the animal and chewed again is called rumination (or chewing the cud). All the animals which chew the cud are called ruminants.

The animals called ruminants can survive on grass as food because they have certain bacteria in the rumen part of their stomach which can digest the cellulose carbohydrate present in grass (and other plant leaves). 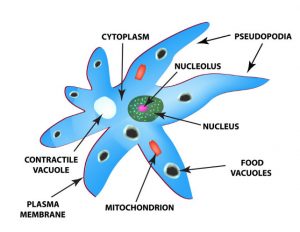 Amoeba is a microscopic organism (very small organism) which consists of a single  cell. Amoeba is so small that it can hardly be seen with naked eyes.

Amoeba has a cell membrane, a round, dense nucleus, and many small bubble-like vacuoles in its cytoplasm. The vacuoles in amoeba are of two types : food vacuoles and contractile

A food vacuole consists of a bubble of water containing the food particle captured by Amoeba. The contractile vacuole is a bubble of liquid. It controls the amount of water present in the body of Amoeba. The most important feature of amoeba is that it has no fixed shape. The shape of Amoeba keeps on changing constantly. The shape of Amoeba changes because it can make its cytoplasm flow in any direction it wants to.

The body of Amoeba has finger-like projections which are called pseudopodia (or false feet). Amoeba can produce pseudopodia on any side by pushing the cytoplasm in that side. Amoeba moves very slowly with the help of pseudopodia (which keep on appearing and disappearing when it moves). Amoeba also uses its pseudopodia to catch food particles from the surroundings.

Feeding and Digestion in Amoeba 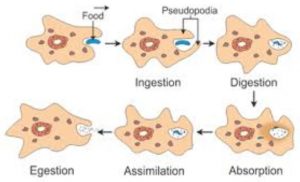 The digestive enzymes break the food particle into simpler substances. In this way, the food gets digested. The digested food present in food vacuole is absorbed directly into the cytoplasm by the process of diffusion.

After the absorption of food, the food vacuole disappears. The absorbed food is used for the production of energy, maintenance and growth of amoeba.

A similarity between the nutrition in Amoeba and human beings is that in both the cases digestive juices break down the complex food particles into simpler substances (which can be absorbed).