Question 2 Name the devices which were used in ancient times for measuring time?

Question 3 How was the time measured in ancient times?

Question 4 How sundial helps to find the time during ancient period?

Question 5 How sand clock helps to find the time during ancient period?

Question 6 How water clock helps to find the time during ancient period?

Time is a moment or duration in which things occur. We measure time with the help of clocks and watches.

Measurement of Time in Ancient Times

(1) The time from one full moon to the next full moon was called a month.

(2) The time from one sunrise to the next sunrise was called a day. 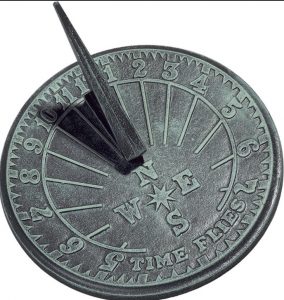 A sundial measures time by the position of the shadow cast by the sun.The sun rises in the east, appears to move in the sky during the day, and finally sets in the west. Due to this apparent movement of the sun in the sky , the position of shadow of a vertical object on the ground changes continuously throughout the day. 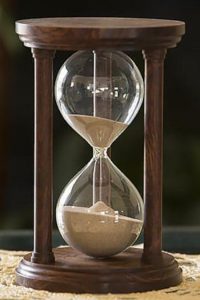 Sand clock is also known as sand-glass or hour-glass. The sand clock uses the flow of sand (from one glass bulb to another) to measure time. The length of time taken by the sand to pass from one bulb of the sand clock to the other, gives a constant time interval. A sand clock consists of two glass bulbs joined together through a narrow tube.

Some sand is filled in one of the glass bulbs. The two glass bulbs are closed at the outer ends. When the sand clock is kept in such a way that the sand is in the upper bulb, the entire sand flows down to the lower bulb slowly, in a fixed time interval. When the sand clock is to be used again, it is turned upside down so that the sand containing bulb comes at the top. The sand clock (or sand glass) is usually filled with so much sand that it takes one hour to fall from the upper bulb to the lower bulb. This is why sand clock (or sand-glass) is also called an hour-glass 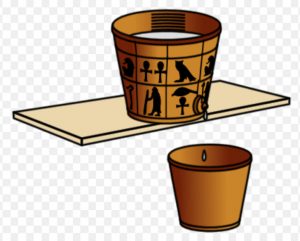 Time is normally measured in the units of hours, minutes and seconds.

The bigger units of time for expressing longer time intervals are : Day, Month and Year.

Different units of time are used depending on the purpose for which they are to be used.

1) The time taken to cover the distance between our home and school should be expressed in minutes (or hours) and not in days or months.

2) The age of a person should be expressed in years and not in days or hours.

3) The ages of stars and planets are expressed in billions of years.

The two extremely small units of time which are used for expressing very, very small time intervals are ‘microsecond and ‘nanosecond’.

A motion which repeats itself at regular intervals of time is called periodic motion.

Clocks and watches which are used for measuring time are based on the principle of periodic motion.

The pendulum clock used for measuring time is based on the periodic motion of a pendulum.