You are here: Home / Class 7 / Science / Motion and Time / Pendulum

Question 1 What is simple pendulum?

Question 2 Define the term time period, length of pendulum, oscillations and amplitude of a pendulum?

Question 3 What are digital quartz clock?

Question 4 What are non-digital quartz clock?

Question 5 What are atomic clocks?

Question 6 What are pendulum clocks? 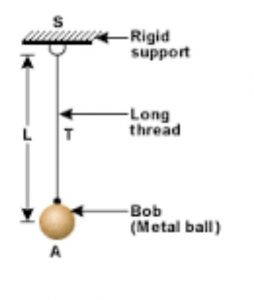 A simple pendulum consists of a small metal ball (called bob) suspended by a long thread from a rigid support, such that the bob is free to swing back and forth.

The motion of pendulum was first studied by Galileo.

A pendulum completes every swing (or every oscillation) in exactly the same time, provided its length is kept constant.

The time period of oscillation of a given pendulum is constant.

A simple pendulum can be made by tying about one metre long thread to a small metal ball (called bob) and suspending it from a rigid support so that the bob is free to swing When the pendulum is at rest, then its bob is at the mean position. If the bob of this pendulum is pulled to one side and then released, it will begin to oscillate to-and-fro (back and forth) like a swing. 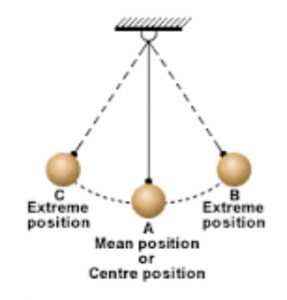 Initially the bob is at the mean position A. Now, suppose the bob is pulled a little to the right side to position-B-and then released. It will be seen to come back and move on to position C, at an equal distance on the other side of the mean position A, and then go on repeating this back and forth motion between the two extreme positions B and C. And we say that the simple pendulum is oscillating (or vibrating).

The to-and-fro motion of a simple pendulum is an example of periodic motion (or oscillatory motion).

One complete to-and-fro movement of the pendulum bob is called an oscillation.

One oscillation can be counted starting from one of the extreme positions of the bob or from the mean position. 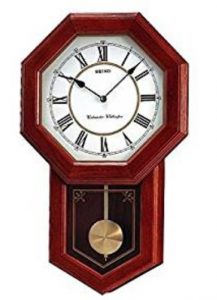 The pendulum clock uses this periodic motion of pendulum for measuring time. When the pendulum swings continuously, its upper end drives some toothed wheels. The toothed wheels then turn the hours’ hand, minutes’ hand and seconds hand on the dial of the clock due to which we are able to read time.

The pendulum clocks were big and bulky, so they could not be carried everywhere easily.

Use of Quartz Crystals

Quartz clocks and watches require electric cells for their working. The very accurate measurement of time is also done by using atomic clocks which make use of the regular oscillations (or vibrations) of individual atoms for their time keeping.

The smallest time interval that can be measured with commonly available clocks and watches is 1 second.