Question 1 What is meant by sericulture?

Question 2 What are the characteristics of silk fibres obtained from the cocoons of  silk moth?

Question 3  How will you distinguish between natural and artificial silk?

Question 4 What is meant by reeling the silk? How is it done?

Question 5 What is a cocoon? name the fibre of which a cocoon is made?

Question 7 Describe how silk is produced?

Question 9 Name the tree whose leaves provide food for the silkworms?

Question 10 What is silk?

Question 11 What are the different varieties of silk?

Silk is a fine, strong, soft and shining fibre produced by silkworms in making their cocoons.

Silk is a natural fibre which is obtained from an insect (called silk moth). So, silk is an animal fibre. Silk fibre is made of a protein. The soft looking silk yarn is as strong as a comparable thread of steel.

Silk fibres are converted into silk yarn which is used for making silk cloth.

The rearing of silkworms for obtaining silk is called Sericulture. 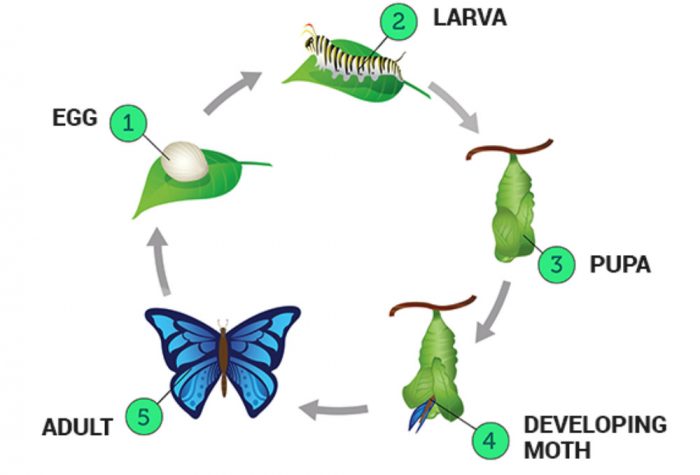 Silk moth is a kind of insect. The silk moth passes through a worm-like stage called ‘larva’ or caterpillar’ (which is also called silkworm) and an encased form called pupa’ during its development between the hatching of egg and formation of adult silk moth.

This can be written as:

The larva (or caterpillar) of a silk moth which produces silk is called silkworm.

(2) The eggs hatch to form worm-like larvae. The larvae of silk moth are called caterpillars or silkworms. The silkworms feed on the leaves of mulberry tree and grow bigger in size. Silk is formed in liquid form in the two glands in the silkworms’s head.

(4) When the pupa (encased in cocoon) develops fully to form an adult silk moth, then the cocoon splits up and a beautiful silk moth comes out. The adult female silk moth then lays more eggs. In this way, the life history of silk moth is completed.

In order to produce silk, the silkworm developing inside the cocoon (as pupa) is not allowed to mature into an adult silk moth. As soon as the cocoon is formed it is used to obtain silk

fibres and the developing silkworm (as pupa) gets killed. This is because if the silkworm (as pupa) is allowed to mature into a silk moth, then the fully formed silk moth secretes a liquid to dissolve a part of silk of the cocoon to break it so as to come out of it and fly away. This breaking of cocoon causes damage to its silk threads and hence lowers the quality of silk. The cocoons having developing silkworms inside them are used to obtain silk. Some of the silkworms (as pupae) are allowed to live and mature into silk moths so that they can lay eggs to produce more silkworms. 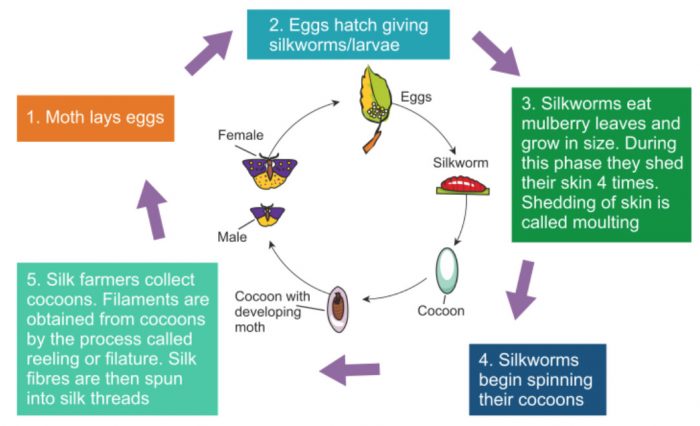 The rearing of silkworms, processing of cocoons to obtain silk fibres and making of silk fabrics (silk cloth) from silk fibres.

(1) Rearing of Silkworms to Obtain Cocoons

A female silk moth lays hundreds of eggs at a time. The eggs of silk moths are stored

carefully on paper strips (or cloth strips) and sold to silkworm farmers. The farmers keep these eggs at suitable temperature and humidity under hygienic conditions. The eggs are then warmed to a suitable temperature for hatching. When the eggs hatch, silkworms (larvae or caterpillars) come out of eggs.

The silk yarn is then woven on looms into silk cloth by the weavers.

the most common variety of silk is mulberry silk.