Question 2 Mention two advantages of electromagnet over a permanent magnet?

Question 3 Describe the construction and working of electromagnet?

Question 4 What is meant by magnetic effect of current?

Question 5 Why do we use iron for making an electromagnet and not steel?

The magnetic effect of current was discovered by a scientist named Hans Christian Oersted. Oersted found that when electric current was passed in a wire, then the needle of deflected from its usual north-south position.Now, the needle of a compass is itself a tiny magnet (which can rotate freely on a pivot). A compass needle can be deflected only by another magnet’s magnetic field.

Activity: To demonstrate the magnetic effect of current 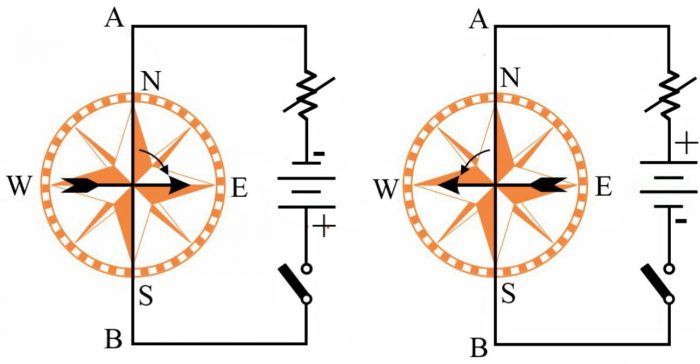 (1) We take a thick, insulated copper wire AB and fix it on a table in such a way that this wire is in the north-south direction.

(2) A compass is placed under the wire AB. The two ends of the wire AB are connected to a cell through a switch by using connecting wires.

(4) Now close the switch so that an electric current passes through the wire AB.We will find that when current is passing through the wire AB, then the needle of compass is deflected from its original north-south direction and points in another direction.

(6) It is the magnetism produced by current-carrying wire which is exerting a force on the compass needle and deflecting it from its usual north-south position.

(7) If we now open the switch so that the current stops flowing in the wire AB, we will find that the compass needle comes back to its original position. This shows that when electric current flowing in a wire stops, then the magnetism produced by it disappears. 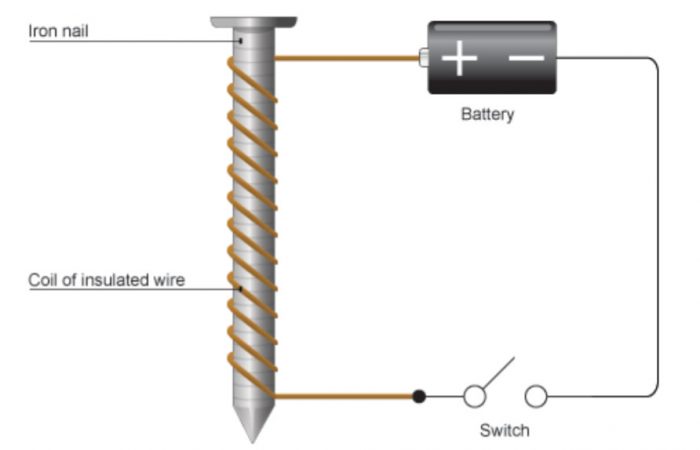 An electromagnet is a magnet consisting of a coil of insulated wire wrapped around a piece of iron that is magnetised only when electric current is passed through the coil.

Only iron is used for making electromagnets. This is because when current is switched off in the coil of an electromagnet made of iron piece, then the iron piece loses all its magnetism.

Activity : To make an electromagnet 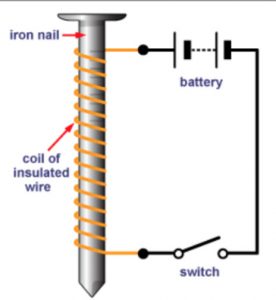 (3) Wind the insulated copper wire round and round closely on the iron nail so that it may form a coil.

(4) Connect the free ends of the coil of wire to the two terminals of an electric cell through a switch.

(5) Switch on the current in the coiled wire by closing the gap in the switch. Now, place some steel pins near one of the ends of iron nail. We will find that the steel pins cling to the iron nail.

(6) The iron nail attracts the steel pins because the electric current flowing in copper wire coil (wrapped around it) has turned the iron nail into an electromagnet.

Advantages of Electromagnets over Permanent Magnets

An electromagnet is a temporary magnet because its magnetism is only for the duration of current flowing in its coil.

Advantages of the electromagnets

(1) The magnetism of an electromagnet can be switched on or switched off as desired. This is not possible with a permanent magnet.

(2) An electromagnet can be made very strong

(a) by increasing the number of turns in the coil

(b) by increasing the current passing through the coil.

(1) Electromagnets are used in the construction of a large number of devices like electric bells, loudspeakers, electric motors, electric fans, toys and telephone instruments, etc.

(3) Electromagnets are used to separate magnetic materials like iron and steel objects from a heap of metal scrap (or junk).

(4) Electromagnets are used by doctors to remove tiny iron particles from the eyes of a person.

Electromagnets are made in different shapes and sizes depending upon the purpose for which they are to be used. 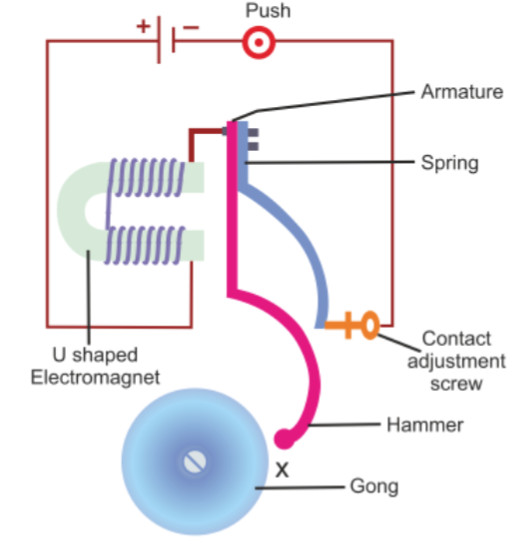 (1) The electric bell has a U-shaped electromagnet.

(2) A small iron bar called armature is held in front of the poles of the electromagnet.

(3) The lower end of iron bar is attached to a flat spring and the flat spring is itself fixed to a metal bracket.

(4) The upper end of iron bar has a clapper attached to it. Initially, when the bell is not working, the clapper or hammer is at a short distance away from the gong.

(5) There is a contact screw which just touches the iron bar at point.The contact screw is also called an interrupter because it interrupts (or breaks) the circuit of electric bell periodically.

(6) A metal gong (which is hollow like a bicycle bell) is fixed near the clapper. The bell works with a battery  and a push-button switch is provided to ring the bell.

(8) The other terminal of battery is connected to the contact screw through the push-button switch .

When the armature moves towards the magnet, its contact with the contact screw is broken at point . Due to this the electric circuit breaks and no current flows in the electromagnet coil. The electromagnet loses its magnetism for a moment and the armature is no longer attracted by it. The flat spring brings back the iron armature to its original position and the clapper also moves away from the gong.

As soon as the armature comes back and touches the contact screw , the circuit is completed and current starts flowing in the electromagnet coil again. The electromagnet attracts the iron armature once again and the clapper strikes the gong again producing a ringing sound.

This process of make and break of the electric circuit continues as long as we are pressing the switch. Due to this, the armature vibrates forwards and backwards rapidly each time making the clapper strike the gong. Thus, the clapper strikes the gong rapidly producing almost continuous sound. And we say that the bell is ringing.