You are here: Home / Class 7 / Science / Electric Current and its Effects / Electric Circuit

Question 1 What is an electric circuit? Draw an open and closed circuit?

Question 2 What is meant by a battery? How will you arrange two cells to make a battery?

Question 3 Give the names and symbols for common electrical components?

Question 4 Draw a circuit diagram with an open and closed switch?

Question 5 What are storage cells?

Though electricity is very useful but it can also be very dangerous. If electric wires and electrical appliances are handled carelessly, then a person can get an electric shock which may cause severe burns and even death. Improper handling of electricity can also cause fires.

We should never use electricity (or electric current) from electric power supply line (which is called mains electricity) through sockets in our home or school, or that produced by portable generators or inverters, for performing science experiments because it is very unsafe to do so. It may give us an electric shock, which may be dangerous.

For example: A single electric cell usually provides only 1.5 volt of electricity whereas the electricity from the power station which we get in our homes is at a very high voltage of 220 volts. To obtain electricity (or electric current) from a cell or battery, we have to connect it into a circuit.

Electric current is actually a flow of charged particles called electrons in a conductor (such as a metal wire).

A cell or battery is a source of electric current.

A continuous conducting path (consisting of wires, bulb, switch, etc.) between the two terminals of a cell or battery along which an electric current flows, is called a circuit.

(2) The positive terminal of the cell is connected to one end of the switch with a piece of copper wire.

(3) The other end of switch is connected to one end of bulb holder with another piece of copper wire.

(4) The negative terminal of the cell is connected directly to the other end of bulb holder with a copper wire. 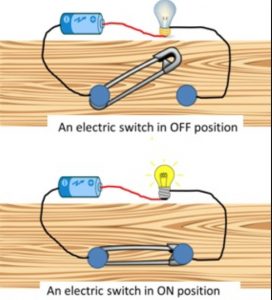 If we open the switch so that it comes in the ‘off position, then a gap is created between the two ends of the copper wire (or connecting wire). Due to this, one terminal of the cell gets disconnected from the bulb and hence the current stops flowing in the circuit. Thus, when the switch is open (or in off position), the circuit breaks and no current flows through the bulb. The bulb stops glowing.

A switch can be connected anywhere in a circuit. When we bring the switch of such a circuit in the ‘on position, then electric current will flow instantly through the whole circuit due to which all the bulbs will light up (or glow) together at once. When the switch is in the ‘off position, then no current can flow in any part of the circuit and hence no bulb can light up (or glow).

In electric circuits we have to show a cell or battery, switch, bulb (or lamp) and connecting wires.

(3) The symbol of electric bulb consists of a circle having a semi-circle inside it. The semi-circle represents the filament of the bulb. The switch is a device which is used to ‘make’ or ‘break’ an electric circuit.

(4) The symbol of an open switch and closed switch is shown in figure. A switch is sometimes also called a key.

(5) The connecting wires (which are used to connect the various components of a circuit like cell, switch, bulb, etc.) are represented just by drawing straight lines. These straight lines can be horizontal as well as vertical.

It is very convenient to represent various electrical components (such as a cell, battery, bulb, switch and connecting wires) by symbols.By using these symbols, electric circuits can be represented conveniently by drawing their circuit diagrams. 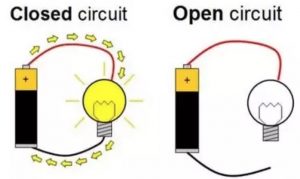 The circuit is complete (due to closed switch) means there is no gap due to which current flows in this circuit and the bulb lights up.

The circuit is broken (due to a gap because of open switch), so no current flows in this circuit and bulb does not glow.

The electric cell is a common source of electric current to run a number of devices in our everyday life.

The higher voltage can be obtained by combining a number of cells in series. When the positive terminal of one cell is joined with the negative terminal of the other cell, then the cells are said to be joined in series.

A group of cells joined in series is called a battery.

The devices such as torches, radios, TV remote controls and toys use batteries (made of two or more cells).

The batteries used in cars, buses, trucks, tractors and inverters are made up of cells.The cells of these batteries are different from the ordinary cells which we use in torches. These cells are called storage cells.