The colloidal solutions are heterogeneous in nature consisting of two phases (1) dispersed phase and (2) dispersion medium.

Because of the small particle size, the colloidal solutions generally appear to be homogeneous to the naked eye but their heterogeneity can be confirmed by seeing under electron microscope.

The colloidal solutions are quite stable. Their particles in a state of motion and do not settle down at the bottom of the container.Particles of certain colloidal sols, which have comparatively large size may settle down but very slowly.

The colloidal particles being bigger aggregates have very high molecular masses so that the number of particles per litre of the sol is relatively very small than in a true solution.

a) The sols boil and freeze at almost the same temperature as the pure dispersion medium and lowering in vapour pressure is also negligible.

b) The osmotic pressure of colloidal solutions, though smaller than true solutions is the only colligative property which has been determined with a reasonable degree of accuracy. It gives information regarding the number of particles present per kilogram of the dispersion medium and this can be used to determine the average molecular masses of colloidal particles.

When colloidal solutions are viewed through a powerful ultramicroscope, the colloidal particles are seen to be in a state of continuous zig-zag motion.

This motion was first observed by the British botanist, Robert Brown in 1827.

The pollengrains suspended in water do not remain at rest but move about continuously and randomly in all directions.

The colloidal particles also are moving at random in a zig-zag motion. This type of motion is called Brownian movement after the name of its discoverer, Robert Brown.

The Brownian motion is independent of the nature of the colloid but depends on the size of the particles and viscosity of solution. Smaller the size and lesser the viscosity, faster is the motion. 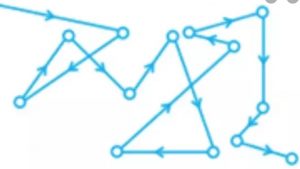 Cause of Brownian Movement

Brownian movement has a stirring effect which does not allow the particles to settle down and hence is responsible for the stability of the sols. However, if the size of the dispersed phase particles increases, then the chances of unequal bombardment decrease.

(1) Brownian movement provides a direct demonstration of the ceaseless motion of molecules as postulated by kinetic theory.

(ii) The Brownian movement explains the force of gravity acting on colloidal particles. This helps in providing stability to colloidal sols by not allowing them to settle down.

(iii) It has also helped in the determination of Avogadro’s number.

The colloidal particles settle down under the influence of gravity at a very slow rate. This phenomenon is called sedimentation and is used to determine the molecular mass of macromolecules.

When a strong beam of light is passed through a true solution placed in a beaker, in a dark room, the path of the light does not become visible.

However, if the light is passed through a sol, placed in the same room, the path of the light becomes visible when viewed from a direction at right angle to that of the incident beam.

This phenomenon was first observed by Faraday and later studied in detail by Tyndall and therefore, it is called Tyndall effect.

The Tyndall effect can be observed due to scattering of dust particles, when a beam of sunlight enters a dark room through a slit.

Tyndall effect is observed only when the following two conditions are satisfied :

(i) The diameter of the dispersed phase particles is not much smaller than the wavelength of light used.

(ii) The refractive indices of the dispersed phase and the dispersion medium are largely in magnitude.

The Tyndall effect has also been used to devise an instrument called utramicroscope .In this instrument, an intense beam of light is focussed on the colloidal solution contained in a glass vessel. The focus of light is then viewed with a microscope at right angles to the beam.

Individual colloidal particles appear as spots of bright light against a dark background.

It has been observed that the colour of colloidal solutions also changes with the manner in which the observer receives the light.

For example: a mixture of milk and water appears blue when viewed by the reflected light but if transmitted light is viewed it is red. Similarly, gold sol is red in colour when the particles are fine but as the size of the particles increases, its colour changes to purple, then blue and finally golden.

The particles of the colloidal solutions possess electrical charge, positive or negative. The presence of charge is responsible for the stability of these solutions.

The sol particles carry some charge while the dispersion medium has no charge.

For example: the colloidal solutions of gold, arsenious sulphide (As2S3) are negatively charged while those of Fe(OH)3 and Al(OH)3  have positive charge.

In the case of silver chloride sol, the particles may either be positively or negatively charged.

Various views have been put forward regarding the origin of charge on the colloidal particles.

(a) Due to Frictional Electrification

(b) Due to Dissociation of the Surface Molecules

In aqueous solution of soap (sod. palmitate) which dissociates into ions as:

The cations (Na+) pass into the solution while the anions (C15H31COO¯) have a tendency to form aggregates due to weak attractive forces present in the hydrocarbon chains.

(c) Due to Selective Adsorption of ions

The particles constituting the dispersed phase adsorb only those ions preferentially which are common with their own lattice ions.

For example: if silver nitrate solution is added to an aqueous solution of potassium iodide, the precipitated silver iodide will adsorb negative I¯ ions (common ions) from the dispersion medium to form a negatively charged sol.

However, if silver iodide is formed by adding potassium iodide to silver nitrate solution, the sol will be positively charged due to the adsorption of Ag+ ions (common ions) present in the dispersion medium.

Thus, the ion which is common with their own lattice ions is preferentially adsorbed.

Based on the nature of the charge, the colloidal solutions have been classified into positively charged and negatively charged colloids.

The presence of the charge on the sol particles and its nature whether positive or negative can be determined with the help of a phenomenon known as electrophoresis.

The colloidal particles move towards positive or negative electrodes depending upon their charge under the influence of electrical field.

The phenomenon of movement of colloidal particles under an applied electric field is called electrophoresis.

a) The apparatus consists of U-tube with two platinum electrodes in each limb.

c) The intensity of the colour of the sol in both the arms is same.

d) Now pass the current through the sol.

f) This indicates that the particles of As2S3 are negatively charged and they move towards oppositely charged (positive) electrode and accumulate there.

When an electric current is passed through positively charged Fe3(OH) sol, it is observed that they move towards negatively charged electrode and get accumulated there.

Thus, by observing the direction of movement of the colloidal particles, the sign of the charge carried by the particles can be determined.

When the movement of the colloidal particles is prevented by some suitable means and the molecules of the dispersion medium are allowed to move under the influence of applied potential, the phenomena is called electroosmosis.

Electroosmosis is the phenomenon of the movement of the molecules of the dispersion medium under the influence of electric field whereas colloidal particles are not allowed to move.