The colloids are classified on the basis of the following criteria :

2) Natural of interactions between dispersed phase and dispersion medium.

3) Type of particles of the dispersed phase.

Depending upon the physical state of dispersed phase and dispersion medium whether these are solids, liquids or gases, eight types of colloidal systems are possible. 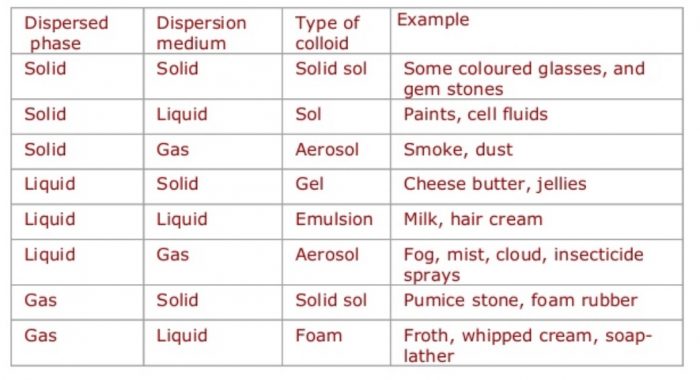 Depending upon the nature of the dispersion medium, colloidal solutions are sometimes given specific names. For example:

Depending upon the nature of interactions between dispersed phase and the dispersion medium, the colloidal solutions can be classified into two types as :

The colloidal solutions in which the particles of the dispersed phase have a great affinity (or love) for the dispersion medium, are called lyophilic colloids.

b) These sols are quite stable and cannot be easily coagulated.

The colloidal solutions in which there is no affinity between particles of the dispersed phase and the dispersion medium are called lyophobic colloids. Such solutions are formed with difficulty.

a) These sols are readily precipitated (or coagulated) on the addition of small amounts of electrolytes, by heating or by shaking. Therefore, these are not stable. Further, once precipitated, they do not form the colloidal sol by simple addition of dispersion medium. Hence, these are irreversible in nature.

These sols need some stabilising agents for their preservation. In case, the dispersion medium is water, the lyophobic sol. is called hydrophobic colloid.

For example: the solutions of metals like Ag and Au, hydroxides Fe(OH)3, metal sulphides like AS2S3 etc.

Difference between Lyophilic and Lyophobic Colloids

Classification Based on type of particles of dispersed phase

Depending upon the type of the particles of the dispersed phase, the colloids are classified as :

When on dissolution, atoms or smaller molecules of substances (having diameter less than 1 nm) aggregate together to form particles of colloidal dimensions, the particles thus formed are called multimolecular colloids.

Therefore, in these sols the dispersed phase consists of aggregates of atoms or molecules with molecular size less than 1 nm.

For example: sols of gold atoms and sulphur (S8) molecules.

In these colloids, the particles are held together by van der Waals forces.

These are the substances having big size molecules (called macro molecules) which on dissolution form solution in which the dispersed phase particles have size in the colloidal range.

These are the substances which when dissolved in a medium behave as normal electrolytes at low concentration but behave as colloidal particles at higher concentration due to the formation of aggregated particles. The aggregate particles thus formed are called micelles.

For example: In aqueous solution soap (sodium stearate) ionises as:

In concentrated solution, these ions get associated to form an aggregate of colloidal size.The colloidal behaviours of such substances is due to the formation of aggregates or clusters in solutions. Such aggregated particles are called micelles.

Thus, micelles are the cluster or aggregated particles formed by association of colloids in solution.The common examples of micelles are soaps and detergents.

On dilution, these colloids revert back to individual ions.

Micelles are generally formed by the aggregation of several ions or molecules with lyophobic as well as lyophilic parts. The micelle may contain as many as 100 molecules or more. When sodium stearate is dissolved in water, it gives Na+ and CH3COO‾ ions.

1) a non-polar part which consists of long chain hydrocarbon part. It is called non-polar tail. This part is insoluble in water but soluble in oil or grease.It is also called water repelling or hyhdrophobic part.

2) a polar group which consists of carboxylate ion, COO‾. It is called polar-ionic head. It is soluble in water and insoluble in oil or grease. It is water attracting or hydrophilic part.

a) The stearate ions are therefore, present on the surface with their COO¯ groups in water and the hydrocarbon tail staying away from it and remains at the surface.

b) Inside water, these molecules have a unique orientation which keeps the hydrocarbon portion out of water.

c) At critical micelle concentration, the anions are pulled into the bulk of the solution and form a clusters of molecules in which the hydrocarbon tails are in the interior of the cluster and ionic ends are at the surface of the cluster. This formation is called micelle formation and the aggregate thus formed is known as ionic micelle.

Examples of micelles are:

In case of detergents e.g., sodium lauryl sulphate, CH3(CH2)11OSO3¯Na+ , the polar group is SO42- along with the long hydrocarbon chain.Therefore, the mechanism of micelle formation is same as that of soaps.

1) The cleansing action of soap is due to its tendency to act as micelle and form emulsions.

2) A soap is composed of long chain of alkyl group called tail and a polar part COO¯ ion called head.

3) The dirt in the cloth is due to the presence of dust particles in fat or grease which stick to the cloth.

4) When the cloth is dipped in aqueous soap solution, the soap and the dirt come in contact with each other.

5) The soap molecules form micelle around the oil droplet in such a way that the hydrophobic part of stearate ions is in the oil or grease droplet while the hydrophilic part projects out of the grease droplet like the bristles.

6) Each oil droplet is surrounded by a number of negatively charged carboxylate ions.

7) Since the polar groups can interact with water, the oil droplets surrounded by stearate ions is now pulled in water and hence removed from dirty surface.

8) Since similar charges repel each other, the oil droplets break up and form small droplets or globules.

9) The negatively charged sheath around the globules prevents them from coming together and form aggregates. These small droplets get dispersed in water forming emulsion.

10) The hand rubbing or the agitation due to the washing machine causes dispersion of the oil or grease throughout the soapy water. These are washed away with water along with dust particles. In this way grease or dirt are removed from the surface of the cloth.