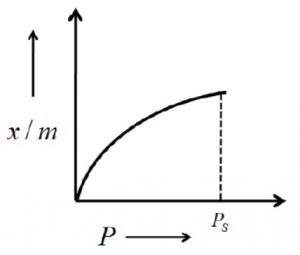 The adsorption on a given surface generally increases with increase in pressure (for gases) and concentration (for solutions) at a constant temperature.

The extent of adsorption of a gas per unit mass of adsorbent depends upon the pressure of the gas. The relation between the amount of substance adsorbed by the adsorbent and the equilibrium gas pressure (or concentration for solutions) at constant temperature is called an adsorption isotherm.

The extent of adsorption (x/m) increases with pressure and becomes maximum corresponding to pressure ps called equilibrium pressure. Since adsorption is a reversible process, the desorption also takes place simultaneously. At this pressure (ps) the amount of gas adsorbed becomes equal to the amount of gas desorbed so that the extent of adsorption becomes constant even though the pressure is increased. This state is also called saturation state and ps is called saturation pressure.

The variation of extent of adsorption (x/m) with pressure (p) at a particular temperature was given mathematically by Freundlich in 1909. 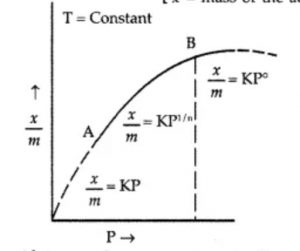 Observation
(i) At low pressure, the graph is almost straight line which indicates that x/m is directly proportional to the pressure.
x/m ∝ pz
x/m = Kp
where K is constant.
(ii) At high pressure, the graph becomes almost constant which means that x/m becomes independent of pressure. This may be expressed as:
x/m = constant
x/m ∝ p0
x/m = K p0
(iii) Thus, in the intermediate range of pressure, x/m will depend upon the power of pressure which lies between 0 to l i.e., fractional power of pressure (probable range 0.1 to 0.5).
This may be expressed as
x/m ∝ p1/n
x/m = Kp1/n

where n can take any whole number value which depends upon the nature of adsorbate and adsorbent. The above relationship is also called Freundlich’s adsorption isotherm.

Calculation of K and n of adsorption isotherm 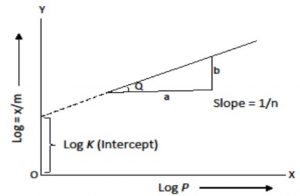 If we plot a graph between log (xlm) on y-axis (ordinate) and log p, on x-axis (abscissa), straight line will be obtained. The slope of the line is equal to 1/n and the intercept is equal to log K.
Freundlich’s adsorption isotherm fails at high temperature.

In case of chemisorption, the adsorption initially increases with rise in temperature and then decreases. Like all chemical reactions, some activation energy is required for chemisorption.

a) At low temperature, x/m is small.

b) As temperature is increased the molecules of the adsorbate gain energy and become equal to activation energy so that proper bonds are formed with the adsorbent molecules.

increase of temperature will increase the energy of molecules which have already been adsorbed.

d) This would increase the rate of desorption and, therefore, decrease the extent of adsorption. 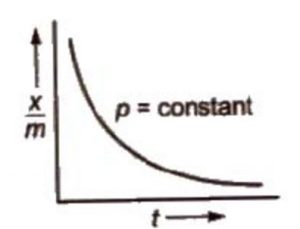 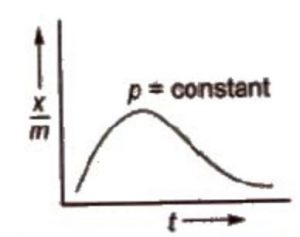 The process of adsorption can take place from solutions also.
1) When solution of acetic acid in water is shaken with charcoal, a part of the acid is adsorbed by charcoal and therefore, the concentration of acetic acid decreases in the solution.
2) When magnesium is precipitated as magnesium hydroxide, in the presence of magneson reagent, it attains blue colour. The colour is due to adsorption of magneson.
3) The litmus solution when shaken with charcoal becomes colourless because of adsorption from solution phase.

Solid adsorbents adsorb certain solutes from solution in preference to other solutes and solvents.