The group 18 consists of elements helium (He), neon (Ne), argon (Ar), krypton (Kr), xenon (Xe) and radon (Rn).  These gases at ordinary temperature do not have chemical reactivity and therefore, these were called inert gases. Because of the low abundance of these gases on earth, they have also been called rare gases.

Due to the inert nature of noble gases, they always occur in the free state. Except radon, all these gases are present in atmosphere in the atomic state. Their total percentage in dry air is about 1% by volume, of which argon (0.93%) in the major component. It originates in the air mostly from electron capture of potassium.

Helium is also present in natural gas to the extent of 2 to 7%. Helium and sometimes neon are found in small quantities in minerals of radioactive element such as monazite, clevite, pitch blende, etc. Helium, neon and argon are found in the water of certain springs.

Radon is radioactive and does not occur in the free state because it decays very rapidly. 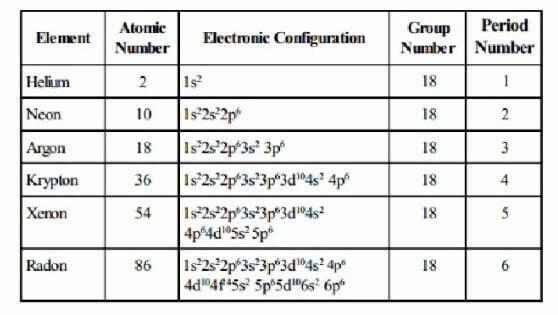 All the noble gases are monoatomic, colourless and odourless gases. The monoatomic state of these gases is due to stable electronic configuration (ns2np6) of their atoms. As a result, they are not capable of combining even amongst themselves.

As we go down the group, the van der Waal’s radius increases due to the addition of new electronic shells.
(c) Ionisation Enthalpies

Due to the stable ns2np6 electronic configurations, noble gas atoms have no tendency to accept additional electron. Therefore, their electron gain enthalpies are zero or have large positive values.

The noble gases are not easily liquefied. This is due to the fact that there are only weak van der Waal’s forces which hold atoms together.

Due to increase in atomic size and, therefore, increase in van der Waal forces, the ease of liquefaction increases down the group from He to Rn.

The noble gases are only slightly soluble in water. The solubility, in general, increases from He to Rn.

Noble gases are not very reactive. Their inertness to chemical reactivity is attributed to the following reasons:
(i) The noble gases have completely filled ns2np6 electronic configurations in their valence shells.
(ii) The noble gases have very high ionisation energies.
(iii) The electron affinities of noble gases are almost zero or large and positive.
Therefore, they have neither tendency to gain nor to lose any electron and do not enter into chemical combinations.
In March 1962, Neil Bartlett noticed that platinum hexafluoride, PtF6 is a powerful oxidising agent which combines with molecular oxygen to form red ionic compound, dioxygenyl hexafluoroplatinate (V), O2+ [PtF6]–
O2 (g) + PtF6 (g) → O2[PtF6]-
This indicates that PtF6 has oxidised O2 to O2+.

Oxygen and xenon have some similarities:

(i) The first ionisation energy of xenon gas (1170 kJ mol-1) is fairly close to that of oxygen (1175 kJ mol-1).
(ii) The molecular diameter of oxygen and atomic radius of xenon are similar (4A°).
On this assumption, Bartlett reacted xenon and platinum hexafluoride in gas phase and an orange yellow solid of the composition XePtF6 was obtained.
Xe(g) + PtF6 (g) → Xe+[PtF6]‾ (s)
The formation of this compound has shown that xenon is not totally inert and after this a number of compounds of xenon were prepared.