You are here: Home / Class 12 / Chemistry / The p-Block Elements / Oxoacids of Halogens and Interhalogen Compounds

Among the halogens, fluorine has very little tendency to form oxoacids due to its high electronegativity and small size. However, it forms one oxoacid HOF known as fluoric (I) acid or hypofluorous acid. The rest of the halogens form four series of oxoacids, HOX, HXO2, HXO3, and HXO4. Most of these cannot be isolated in pure state. They are stable only in aqueous solution or in the form of their salts. 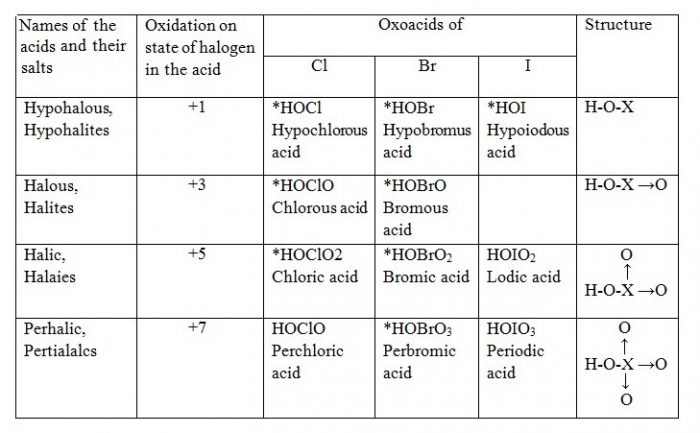 Acidic Character of Oxoacids of Halogens

(i) The acidic strength of oxoacids having the same oxidation number of the halogen atom decreases with increase in atomic number i.e., with decreasing electronegativity of the atom.
For example: HClO is the strongest while HlO is weakest of all the acids in which oxidation state of halogen atom is +1.

The electronegativity of the halogen atom attached to oxygen decreases in the order Cl > Br > I. Therefore, the tendency to withdraw electrons from oxygen atom towards itself decreases from Cl to Br to I. As a result the tendency to pull the electrons from the hydrogen decreases. Consequently, the release of H+ ion from HClO will be easier than HBrO. Similarly, the release of H+ ion from HBrO will be easier than from HIO. Thus, the acidic strength decreases in the order:
HClO > HBrO > HIO
(ii) With the increase in oxidation number of a particular halogen atom, the acidic character of corresponding oxoacid increases.
For example: The acidic strength of oxoacids of chlorine increases in the order :
HClO < HClO2 < HClO3 < HClO4
Explanation: This can be explained on the basis of Lowry Bronsted concept. According to this concept, a strong acid has a weak conjugate base and a weak acid has a strong conjugate base. The conjugate bases of the oxoacids of chlorine are shown below :

Let us consider the stabilities of the conjugate bases, ClO¯, ClO2¯, ClO3‾, and ClO4¯ formed from these acids, HClO, HClO2, HClO3 and HClO4 respectively.

These anions are stabilized by the delocalisation of the charge between oxygen atoms. If the ion is stabilized to greater extent, it has lesser attraction for the proton and therefore, will behave as weaker base (lesser tendency for the reaction to go in backward direction). Consequently, the corresponding acid will be strong because weak conjugate base has strong acid and strong conjugate base has weak acid and vice versa. Now, the charge stabilization is minimum in ClO¯ and maximum in ClO4¯. The charge stabilization increases in the order:

This means that ClO¯ will have minimum stability and therefore, will have maximum attraction for the H+. In other words, ClO¯ will be strongest base and so its conjugate acid HClO will be the weakest acid.

Similarly, in this series, ClO4¯ is the weakest base (maximum stabilized) and its conjugate acid HClO4, is the strongest acid. Thus, the acidic strength increases in the order.

The compounds containing two or more halogen atoms are called interhalogen compounds. They may be represented by the general formula XXn’ , where X is a halogen of larger size and X’ of smaller size and X is more electronegative than X’.

As the ratio between radii of X and X’ increases, the number of atoms per molecule also increases. Thus, iodine (VII) fluoride should have maximum number of atoms because the ratio of radii between I and F is maximum. Each halogen combines with every other halogen to form interhalogen compounds.
For example: CIF, ICl3, BrF5 etc.
These are of two types :

These are neutral molecules containing two or more halogen atoms.
For example: ICl, BrF5, IF5, IF7 etc.

All the interhalogen compounds are essentially covalent and are diamagnetic. They have some polarity. The polarity is due to the difference in electronegativity between the two halogen atoms. The more electronegative halogen atom acquires a negative charge.

Interhalogen compounds exist as gases, liquids and solids. They are volatile solids or liquids except CIF which is a gas at 298 K. Their physical properties are intermediate between those of constituent halogens except that their melting and boiling points are a little higher than expected.

The interhalogen compounds have almost similar reactions to those of component halogens. However, these are generally more reactive than the component halogens (except F2). This is because covalent bond between dissimilar atoms (X-X’) in interhalogen compounds is weaker than between similar atoms (X-X or X’-X) in halogens except F-F bond.
For example: the bond dissociation enthalpy of X-X’ bond is less than the bond dissociation enthalpy of X2 and X2‘. Thus, they readily convert metals into mixed halides.

Most of the interhalogens containing fluorine act as powerful fluorinating agents. They convert several metals into their oxides and chlorides to fluorides.

CIF3 or BrF3 are used for the production of UF6 in the enrichment of uranium (236U). 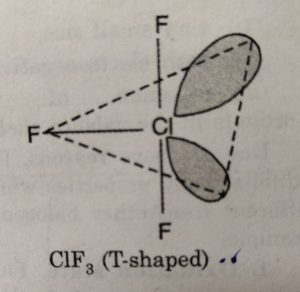 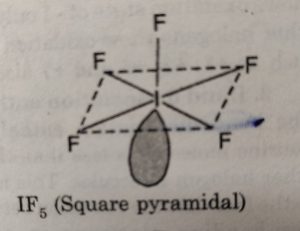 Interhalogen compounds are partially ionised in the solution or in the liquid state.

For example: Fused ICI and ICI3 have specific conductance of the order of 10 ohm-3 cm-1

Structures of some common Interhalogen Compounds

(i) XX3’ involves sp3d hybridisation of the central halogen atom and the molecule has trigonal bipyramidal geometry with two positions occupied by lone pairs. Its structure is termed as T-shaped.

For example:  CIF3 has T-shaped structure.

(ii) XX5‘ involves sp3d2 hybridisation of the central halogen atom and the molecule has octahedral geometry with one position occupied by a lone pair. Its structure is termed as square pyramidal.

For example: IF7 has square pyramidal structure.

For example: IF7 has pentagonal bipyramidal structure.

Triatomic (XX’2) ions
(i) XX’2‾ ions involved sp3d hybridisation having trigonal bipyramidal geometry with three position occupied by lone pairs, The structure is linear.
For example: ICl2‾ is linear .
(ii) XX’4¯ involve sp3d2 hybridisation having octahedral geometry with two positions occupied by lone pairs. The two lone pairs are present on positions above and below the square plane and the structure is regarded as square planar.

All halogens are non-metallic due to high electronegativities and ionisation energies. However, the last element iodine exhibits some properties showing the presence of positive ions. The positive iodine is found in unipositive (I+) and tripositive (I3+) states.

2ICl ⇔ I+ + ICl2¯
(ii) ICl3 conducts electricity and on electrolysis, iodine and chlorine are liberated at both the electrodes. Therefore, the jonization may be represented as
2ICl3⇔ ICl2+ + ICl4¯
The ions ICl2+ and ICl4¯ contain I3+ ions.(iii) A large number of compounds containing iodine as I3+ have been isolated which are ionic.
For example: iodine triacetate, I(CH3COO)3, iodine phosphate, IPO4, iodine triperchlorate I(ClO4)3. On electrolysis, these compounds in aqueous solution liberate iodine at the cathode as:
IPO4⇔ I3+ + PO43-

There are certain uninegative ions made up of two electronegative atoms which have properties similar to the halide ions. These are called pseudo halides. Like the halides, the pseudo halides have the corresponding pseudo halogens which behave like halogens in their chemistry.
Some Examples :