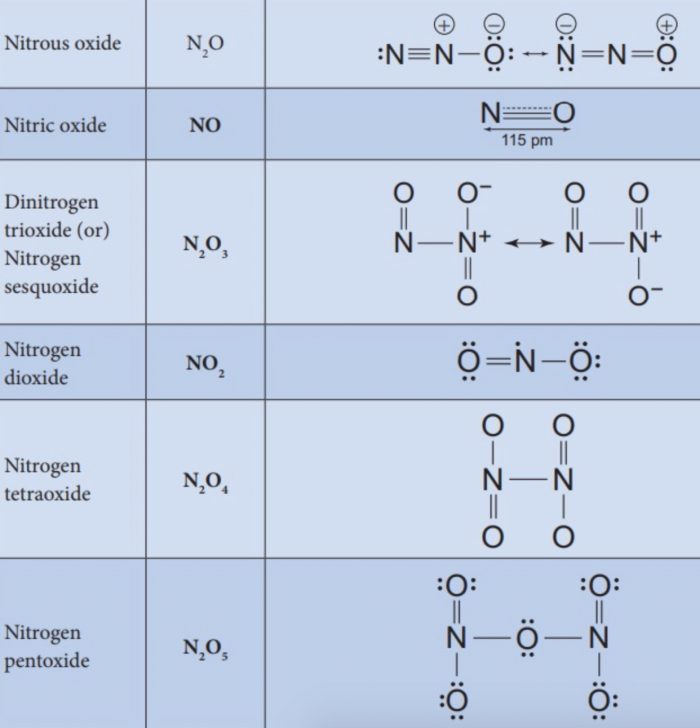 Nitrogen combines with oxygen under different conditions to form a number of binary oxides which differ with respect to the oxidation state of the nitrogen atom. They range from N2O (oxidation state of N +1) through NO (+2), N2O3 (+3), N2O4 (+4) to N2O5(5). The tendency to form pπ- pπ multiple bonds dictates the structures of oxides.

(a) It is prepared by heating ammonium nitrate.

(b) It is a colourless unreactive gas having faint pleasant smell. It is also known as laughing gas because it causes hysterical laughter when inhaled in minor quantities.

(c) It is a neutral oxide and reacts with sodamide to form sodium azide.

(d) In small amounts, it acts as an anaesthetic for minor operations.

(e) It decomposes into nitrogen and oxygen at 873 K.

Therefore, it supports the combustion acting as a source of oxygen.

(a) It is prepared by the catalytic oxidation of ammonia at 1100 K in the presence of platinum.

(b) It can also prepared by the reaction of nitric acid on copper as :

(c) It can also be prepared by the reduction of sodium nitrite with ferrous sulphate in the presence of sulphuric acid.

(d) It is a neutral oxide

(e) It is a colourless gas. It has odd number of electrons (11 valence electrons) and therefore, it is paramagnetic in the gaseous state. However, in the liquid and solid states, it forms a loose dimer in such a way that the magnetic effects of two unpaired electrons are cancelled out. The molecule is diamagnetic.

For example:  Fe2+ combines with NO to form the complex [Fe(H2O)5NO]2+ which is responsible for brown ring test for nitrates.

(1) It is prepared by cooling equimolar quantities of nitric oxide and nitrogen dioxide to below 253 K.

(2) It can also be prepared by reacting nitric oxide and dinitrogen tetraoxide at 250 K.

(1) It is a blue solid and is acidic in nature. It is anhydride of nitrous acid (HNO2).

(2) It exists in the pure form only in the solid state at very low temperatures.Above its melting point (273 K) it dissociates to NO and NO2.

It is prepared by heating dried lead nitrate in a steel reaction vessel.

It is also an odd electron molecule and in the gas phase, it exists in equilibrium with N2O4 as :

(1) It is prepared by dehydrating the concentrated nitric acid with phosphorus pentoxide.

(2) N2O5  exists as colourless solid below 273K. As the temperature rises, the colour changes to yellow due to the partial decomposition of colourless N2O5  to brown NO2.

NO and NO2 are used in the manufacture of nitric acid and nitrate fertilizers Liquid N2O4 is also used as an oxidiser for the rocket fuels in missiles and space vehicles.

(5) NO causes a pollution problem in atmosphere due to its poisonous nature. Its vapours are emitted in the atmosphere during the burning of oil and coal. 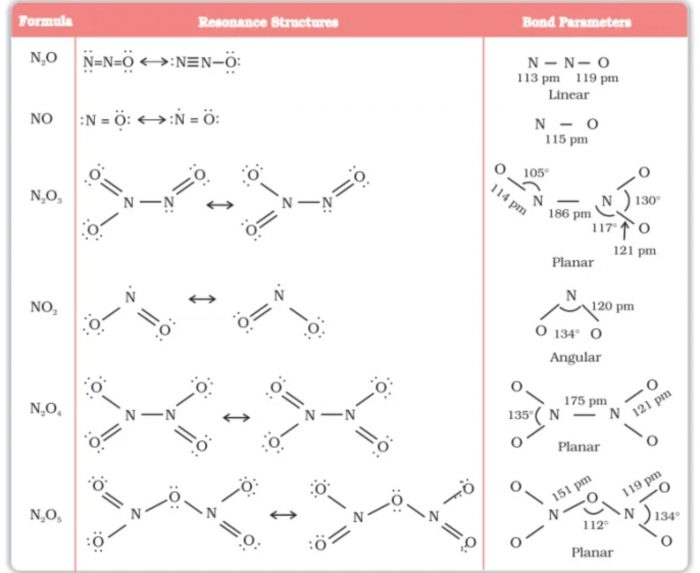