You are here: Home / Class 12 / Chemistry / The p-Block Elements / Dinitrogen and Ammonia

1) It is the first member of group 15 of the periodic table.

2) It has the electronic configuration 1s2 2s2 2p3 and therefore, has five electrons in its valence shell.

3) In the molecular form it exists as a diatomic molecule (N2) having triple bond between nitrogen atoms (NΞN). Therefore, it is also referred to as dinitrogen.


In the laboratory dinitrogen is prepared by heating an aqueous solution containing an equivalent amount of ammonium chloride and sodium nitrate.

It can be prepared by :

3) Very pure nitrogen can be obtained by the thermal decomposition of sodium or barium azide.

Commercial Isolation of Dinitrogen from Air

Commercially dinitrogen is prepared by the liquefaction and fractional distillation of air.  When the liquid air is allowed to boil, dinitrogen with lesser boiling point gets distilled first leaving behind dioxygen.

1) Dinitrogen is a colourless, odourless and tasteless gas.

4) It is slightly lighter than air and its vapour density is 14.

5) It has very low solubility in water.

Dinitrogen is chemically unreactive at room temperature. It is neither combustible nor it supports combustion. The low reactivity of nitrogen is due to very small size of the molecule and high bond dissociation enthalpy of the molecule. However, reactivity increases rapidly with the rise in temperature. At higher temperature dinitrogen combines with some metals to form predominantly ionic nitrides and with non-metals to form covalent nitrides.

1) Action with litmus: Dinitrogen is neutral towards litmus because it has no acțion on blue or red litmus.

2) Action with metals: It combines with a number of active metals on strong heating to form their respective nitrides. For example,

(i) Combination with dihydrogen: Dinitrogen reacts with dihydrogen about 700K under a pressure of 200 atm in the presence of iron as catalyst (Haber process). A small amount of molybdenum is also used as a promotor.

(ii) Combination with dioxygen: Dinitrogen combines with dioxygen during lightning or at high temperature of about 2000 K and form nitric oxide.

Nitric oxide is a colourless gas but is very unstable. It immediately reacts with more of oxygen to form nitrogen dioxide.

a) With calcium carbide

b) With alumina in the presence of carbon

Both these compounds are hydrolysed on boiling with water to give ammonia.

Therefore, calcium cyanamide is used as a fertilizer under the name nitrolim (CACN2 + C).

(i) Dinitrogen is used in the manufacture of compounds like ammonia, nitric acid, calcium cyanamide, etc.

(ii) It is used in providing inert atmosphere in iron and steel industries.

(iii) Liquid nitrogen is used as refrigerant to preserve biological specimens, in freezing food stuffs and also in cryosurgery.

(iv) It is used in gas-filled thermometers used for measuring high temperatures.

Ammonia is present in small quantities in air and soil where it is formed by the decay of nitrogenous organic matter e.g., urea.

Ammonia is prepared in the laboratory by heating ammonium salt: NH4Cl or (NH4)2SO4 with a strong alkali like NaOH.

2) It can also be prepared by the hydrolysis of magnesium nitride.

Ammonia can be dried by passing over quicklime (CaO). However, it cannot be dried with dehydrating agents such as conc. H2SO4. P2O5 and anhydrous CaCl2 because ammonia reacts with these compounds.

Ammonia can be manufactured by Haber’s process which involves the reaction :

The favourable conditions for high yield of ammonia can be understood by applying Le Chatelier’s principle.

(i) Low temperature: Since the forward reaction is exothermic, therefore, low temperature will favour the formation of ammonia. However, an optimum temperature of about 700 K is necessary.

(ii) High pressure: High pressure of the order of 200 atmospheres or 200 x 105 Pa is required to favour the forward reaction.

(iii) Presence of catalyst: The use of catalyst such as iron oxide containing a small amounts of molybdenum or potassium oxide (K2O) and aluminium oxide (Al203) as promoter, increases the rate of attainment of equilibrium of ammonia.

Details of the process 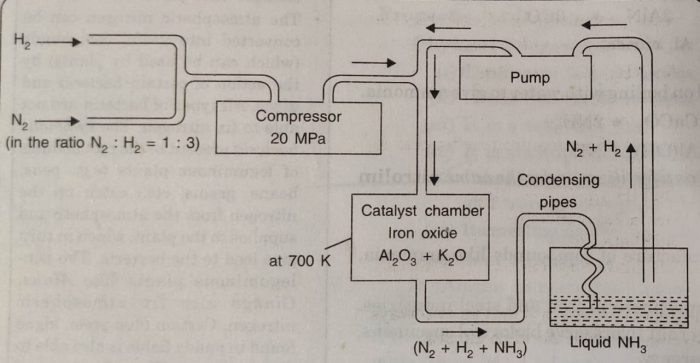 1) In this method a mixture of N2 and H2 in the molar ratio of 1:3 is compressed to about 200 atmosphere pressure.

2) The compressed gases are then cooled and passed through soda lime tower to free them from moisture and carbon dioxide.

3) Then these are fed into catalyst chamber packed with iron oxide with small amount of K20 and Al2O3 or molybdenum.

4) The chamber is heated electrically to a temperature of 700 K when the two gases combine to form ammonia.

5) The reaction being exothermic, the heat evolved maintains the desired temperature and further electrical heating is not required.

6) The gases which escape from the chamber contain about 15-20% ammonia and the remaining are unreacted N2 and H2.

7) These are passed through condensing pipes where ammonia gets liquefied and is collected in the receiver.

8) The unreacted gases are pumped back to the compression pump where they are mixed with fresh gaseous mixture.

1) Ammonia is expected to have a tetrahedral geometry because the central nitrogen atom involves sp3 hybridisation.

2) It has one position occupied by a lone pair. The lone pair distorts its geometry and the molecule has pyramidal geometry with nitrogen atom at the apex.

1)  Ammonia is a colourless gas with a characteristic pungent smell called ammoniacal smell.

3)  It is highly soluble in water and its solution is basic in nature due to the formation of OH¯ ions.

Being basic ammonia forms salts with both weak and strong acids such as NH4Cl , (NH4)2SO4 ,(NH4)2CO3 etc.

2) Tendency to form complexes. Ammonia acts as a Lewis base due to the presence of lone pair of electrons on the nitrogen atom. Therefore, it can form coordinate bond with a number of transition metal cations forming complex compounds.

Since ammonia forms complexes, the white precipitate of silver chloride dissolves in excess of ammonium hydroxide to form a soluble complex.

(i) Chlorine reacts with ammonia in two ways depending upon whether ammonia is in excess or chlorine is in excess.

The complex is very explosive when dry. It explodes violently when rubbed against a hard surface as follows :

For example: When ammonia is passed over heated Copper oxide, it gets oxidised to dinitrogen.

When vapours of NH3 and O2 are passed over red hot platinum gauze at 1075 K, it is oxidised to nitric oxide.

This reaction forms the basis of Ostwarld’s process for the manufacture of nitric acid.

5) Combustion: Ammonia is neither combustible nor supporter of combustion.However, it burns in the presence of oxygen to form dinitrogen and water.

6) Formation of amides: When ammonia is passed over heated sodium or potassium at 575 K. it forms amides with the liberation of dihydrogen.

Heavy metal ions such as Fe3+, Cr3+, Al3+, etc. are precipitated from their aqueous salt solutions as hydroxides with ammonia.

(i) It is used in the manufacture of nitric acid and sodium carbonate.

(ii) Liquid ammonia is used as a refrigerant.

(iii) It is used in the manufacture of rayon.

(iv) It is commonly used for preparing various nitrogenous fertilizers such as ammonium nitrate, ammonium sulphate, ammonium phosphate and urea.

(v) It is an important reagent and is used as a solvent in the laboratory.