You are here: Home / Class 12 / Chemistry / The p-Block Elements / Compounds of Xenon and uses of Noble Gases

The three common fluorides are XeF2, XeF4, and XeF6

It is prepared by heating a mixture of xenon and fluorine in the molecular ratio of 2:1 at 673 K in a sealed nickel vessel at 1 bar pressure. On cooling quickly a colourless solid XeF2 is formed.
Xe + F2 → XeF2 ( Ni Vessel, 1 bar)
(2:1 ratio)
Structure 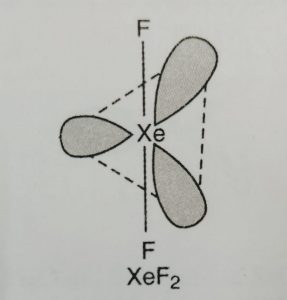 (1) XeF2 has linear structure.
(2) It involves sp3d hybridisation of xenon which adopts trigonal bipyramidal geometry in which three positions are occupied by lone pairs.
Because of the symmetrical arrangement of three lone pairs (each at an angle of 120°C), the net repulsions on the Xe—F bond pairs is zero. Thus XeF2 has linear geometry.
Reaction with water
XeF2 hydrolyses slowly but completely in acidic, neutral or alkaline solutions.
2XeF2 + 2H2O → 2Xe + 4HF + O2
2XeF2 + 2NaOH → 2 Xe + 4NaF + O2 + 2H2O 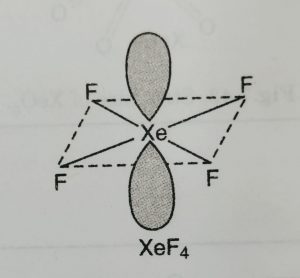 (1) XeF4 has square planar structure.
(2) It involves sp3d2 hybridisation of xenon which adopts octahedral geometry in which two positions are occupied by lone pairs.
Reaction with water
XeF4 undergoes slow hydrolysis with moisture and forms XeO3 which is highly explosive.
6XeF4 + 12H2O → 4Xe + 24HF + 2XeO3(s) + 3O2
But, if the reaction is controlled at – 80° C, it forms xenon oxyfluoride;
XeF4 + 2H2O →  XeOF2 + HF 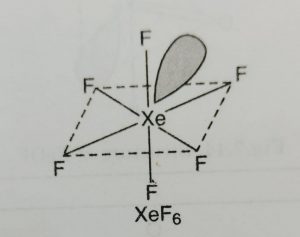 (1) XeF6 has distorted octahedral structure in which all the six positions are occupied by fluorine atoms and the lone pair is present at the centre of one of the triangular faces.
(2) It involves sp3d2 hybridisation of xenon.
Reaction with water
It undergoes slow hydrolysis with atmospheric moisture and forms XeO, which is highly explosive.
XeF6+3H2O → XeO3 + 6HF
Careful hydrolysis in nickel vessel gives colourless stable liquid, XeOF4
XeF6 + H2O → XeOF4 + 2HF

The important oxides of xenon are XeO3 and XeO4. 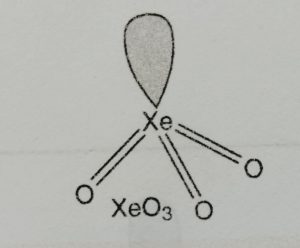 It has pyramidal structure.
It involves sp3 hybridisation of xenon.
Reaction with water
(1) It is soluble in water and quite stable in aqueous solution. However, it explodes violently when dry.
(2) XeO3 reacts with aqueous alkali to form the hydrogen xenate ion HXeO4¯, which slowly disproportionates to give xenon and perxenate ion, XeO64– in which xenon has oxidation state +8.
XeO3 + OH¯ → HXeO4¯
2HXeO4¯ + 2OH‾ → XeO64– + Xe + O2 + 2H2O
Perxenate solutions are yellow and are powerful oxidizing agents.

It is prepared by the action of conc. H2SO4 on sodium or barium xenate (Na4XeO6 or Ba2XeO6) at room temperature.
Structure 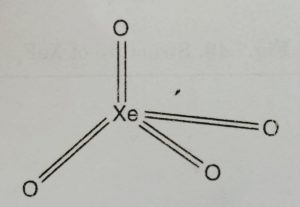 It is prepared by the slow and partial hydrolysis of XeF4 at low temperature.
XeF4 + H2O → XeOF2 + 2HF
Structure 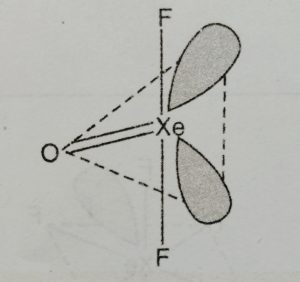 (a) It is prepared by the partial hydrolysis of xenon hexafluoride:
XeF6 + H2O → XeOF4 + 2HF
(b) It can also be prepared by the action of XeF6 on silicon dioxide.
2XeF6 + SiO2 → 2XeOF4 + SiF4
The contents are immediately quenched with solid CO2, as soon as the yellow colour of XeF6 disappears. It is done to avoid the formation of XeO3  (explosive) as:
Structure 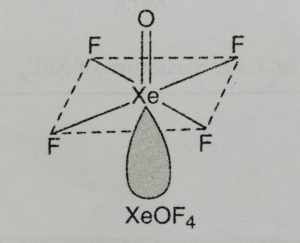 (1) It has square pyramidal.
(2) It involves sp3d2 hybridisation of xenon and one position is occupied by a lone pair.