You are here: Home / Class 12 / Chemistry / The p-Block Elements / Chlorine

Chlorine is very reactive and does not occur in nature in free state. It occurs mostly as chlorides of sodium and other alkali and alkaline earth metals. The most abundant compound of chlorine is sodium chloride (rock salt) and occurs in extensive evaporite deposits, saline lakes and brines and in the ocean. Other sources of chlorine are sylvine (KCl), carnallite (KCl.MgCl2.6H2O) etc.

Chlorine is rarely prepared in a laboratory on large scale because it is readily available in cylinders. However, when required it can be prepared by any one of the following methods :

(i) By heating manganese dioxide with concentrated hydrochloric acid

A mixture of common salt and concentrated H2SO4 is used in place of HCl.

Equal amounts of sodium chloride and manganese dioxide are finely ground and taken in a round bottomed flask. Concentrated sulphuric acid is poured from tap funnel and reaction mixture is heated gently. Greenish yellow vapours of chlorine gas rise up and are collected by the upward displacement of air.

(ii) By the action of HCl on potassium permanganate or potassium dichrormate.

(iii) By the action of HCl on lead oxides or bleaching powder.

Chlorine is manufactured by the following methods:

(i) Deacon’s process: Hydrochloric acid is oxidized by atmospheric air in the presence of CuCl2 (catalyst) at 723 K.

Chlorine is obtained as a by-product during the manufacture of sodium hydroxide by the electrolysis of brine solution (sodium chloride solution).

The sodium chloride solution contains Na+ and H+ (from water) yet the hydrogen ions are discharged more readily than Na+ ions at the cathode due to their low discharge potential.

Similarly, the Cl¯ ions are discharged more readily than OH¯ ions so that Cl2 gas evolved at the anode.

The Na+ and OH¯ ions in the solution combine to give sodium hydroxide.

Since chlorine readily reacts with sodium hydroxide, it is necessary to devise some method to prevent the mixing of sodium hydroxide with chlorine. This is achieved by the use of porous diaphragm in a cell known as Nelson cell. 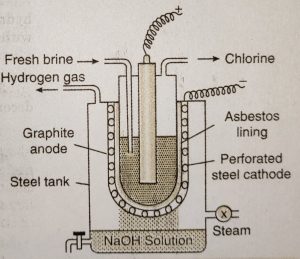 Nelson cell consists of a perforated U-shaped steel vessel which serves as a cathode.It is lined on the inside with porous diaphragm of asbestos. The cathode is suspended in a steel tank. Purified brine solution is taken in the steel cathode and a graphite anode is suspended in it.

When an electric current is passed through the brine solution, chloride ions (in NaCl) give electrons at the anode and change into chlorine. Sodium hydroxide formed around cathode seeps through the asbestos lining and fa!ls into the steel tank. Steam (which is being injected in the outer tank) helps in concentrating the solution of sodium hydroxide.

(i) It is greenish yellow gas.

(ii) It has strong pungent and suffocating odour.

(iii) It is a poisonous gas which causes headache.

(iv) It is about 2 times heavier than air.

(v) It is soluble in water and its aqueous solution is called chlorine water.It is also soluble in organic solvents like carbon tetrachloride. It can be liquefied easily into greenish yellow liquid which boils at 239 K.

(3) Action with water : Since chlorine has great affinity for hydrogen, it decomposes water in presence of sunlight to produce hydrochloric acid.

(4) Combination with metals : Reactivity of chlorine towards different types of metals is as follows :

(i) Very active metals like sodium and calcium burn in the atmosphere of chlorine to form their chlorides.

(5) Combination with non-metals : Non-metals like sulphur, phosphorus and boron react with chlorine readily.

(6) Combination with metalloids : Metalloids like arsenic and antimony catch fire in the atmosphere of chlorine to form their chlorides.

(7) Action with halides: Chlorine displaces the less electronegative halogens (bromine and iodine) from their metallic halides.

(a) In cold, chlorine reacts with strong alkalies to form chlorides and hypochlorites as:

Similarly, the reaction of chlorine with cold solution of KOH is

(b) In hot, chlorine reacts with strong alkalies like NaOH or KOH to produce chlorides and chlorates as:

Similarly, the reaction of chlorine with hot KOH solution is

(ii) When chlorine gas is passed through hot milk of lime, calcium chloride and calcium chlorate are produced as :

However, if chlorine is passed through dry slaked lime, bleaching powder is produced.

The composition of bleaching powder is

(9) Action with ammonia: The reaction of chlorine with a ammonia depends upon the proportion of the reactants as

(i) If ammonia is in excess, nitrogen is formed

(ii) If chlorine is in excess, nitrogen trichloride is formed.

Some of its important oxidising reactions are:

(i) It oxidises sulphur dioxide to sulphuric acid.

(ii) It oxidises sulphites to sulphates.

(iii) It oxidises thiosulphates to sulphates.

(v) It oxidises nitrites to nitrates.

Chlorine can also act as an oxidising agent in absence of water.

(i) It oxidises ferrous chloride to ferric chloride.

(11) Addition reactions : Chlorine reacts with many substances like carbon monoxide, nitric oxide and sulphur dioxide in presence of sunlight to form addition products:

(i) With saturated compounds like methane, chlorine produces substituted products.

(14) Bleaching agent: Chlorine bleaches natural colouring matter of green leaves, flowers, indigo, litmus in presence of water. Its bleaching action is due its ability to oxidise the colouring matter to colourless matter as:

Some noteworthy points regarding its bleaching action are :

(i) Chlorine bleaches only in the presence of water. Thus, dry chlorine cannot bleach dry flowers because in absence of water, it cannot produce nascent oxygen needed for oxidation.

(i) Since chlorine bleaches by oxidation, the bleaching action of chlorine is permanent.

(i) Large quantities of chlorine are used industrially for bleaching wood pulp (required for manufacture of paper and rayon), bleaching of cotton, paper, wood, textiles, etc.

(ii) It is used for the manufacture of dyes, drugs, refrigerants, etc.

(iii) In the manufacture of chlorinated organic solvents such as chloroform (CHCl3), carbon tetrachloride (CCl4), etc. which are used for dry cleaning and degreasing machinery.

(iv) In the manufacture of chlorates which are used in flash light powders matches and explosives.

(v) In the manufacture of bleaching powder, aluminium chloride and sodium hypochlorite which are important industrial compounds.

(vii) In sterilisation of drinking water.

(viii) In the manufacture of D.D.T. which is an important insecticide.

(x) In the extraction of metals like platinum and gold.