The halogens react readily with metals and non-metals to form halides. Fluorine is the most reactive of all the halogens. The reactivity of the halogens decreases down the group.

The high reactivity of halogens is due to the following reasons :

All the halogens have very low dissociation enthalpies. As a result, they can readily dissociate into atoms and react with other substances.

Halogens have very high negative electron gain enthalpy values and therefore, have very strong tendency to gain an electron. Thus, halogens are very reactive elements due to their low dissociation enthalpies and high negative electron gain enthalpies. Fluorine has the lowest bond dissociation enthalpy. This is due to weak F-F bond because of the repulsion between the non-bonding electrons in the small molecule. Therefore, it is most reactive among the halogens. Halogens have high electron acceptance property and therefore they have strong tendency to take up the electron :

The decreasing oxidising power of the halogen as we go down the group is shown by their decreasing reduction potentials. 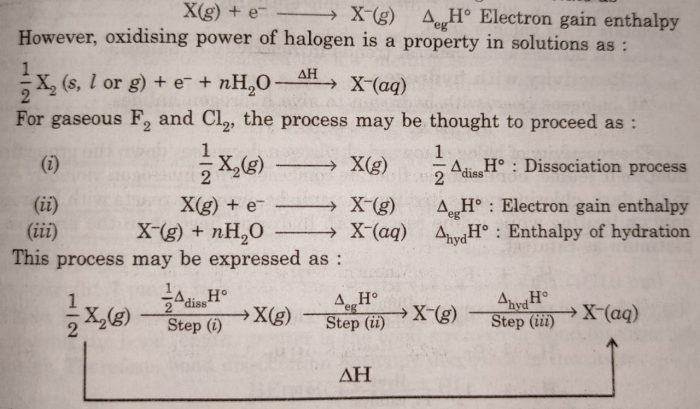 The energy is needed to dissociate or convert molecular halogen into atomic halogen. The enthalpy change for this step is positive. Flourine has less negative electron gain enthalpy, yet it is strongest oxidising agent because of the following reasons :

(i) F2 has low enthalpy of dissociation because of weak F—F bond.

(ii) F2 has very high enthalpy of hydration because of smaller size of the F¯ ion.

The relative oxidising power of halogens can be further illustrated by their reactions with water. Fluorine is so strong oxidising agent that it oxidises water to dioxygen. The reaction is spontaneous and strongly exothermic.

The reaction with chlorine and bromine are thermodynamically possible but they react very slowly forming corresponding hydrohalic and hypohalous acids.

The reaction of iodine with water is non-spontaneous. In fact, iodide can be oxidised by oxygen in acidic medium.

Anomalous behaviour of fluorine is attributed to its small size, highest electronegativity, low bond dissociation enthalpy and absence of vacant d-orbitals in its valence shell.

All halogens react with hydrogen to give hydrogen halides.

Hydrogen fluoride and hydrogen chloride are manufactured by heating a mixture of calcium fluoride (fluorite or fluorospar) and sodium chloride with concentrated H2SO4 respectively.

HBr is manufactured by direct reaction of HI and Br2 at about 570 K in the presence of platinum catalyst.

HI is manufactured by the reaction of HI with H2S or hydrazine.

As the size of halogen atom increases, the bond length (H-X) increases in the same order.

The bond length of HX molecule increases as :

The thermal stability of the hydrides decreases from HF to HI. HF is most stable whereas HI is least stable. For example, HF and HCl are stable up to 1500 K while HBr dissociates to the extent of 10% and HI is dissociated to the extent of 20% at 700 K.

The decrease in stability of the hydrides is due to decrease in bond strength which decreases when we go down the group.

In gaseous state, hydrogen halides are covalent. But in aqueous solutions, they ionise and behave as acids. The acidic strength of these acids decreases in the order :

Thus, HF is the weakest acid and HI is the strongest acid among these hydrogen halides.

Explanation: Fluorine is the most electronegative halogen, therefore, the electronegativity difference will be maximum in HF and should decrease gradually as we move towards iodine through chlorine and bromine. Thus, HF should be more ionic in nature and consequently it should be strongest acid. The bond dissociation energy decreases from HF to HI so that HF has maximum bond dissociation energy and HI has the lowest value.

Since H-I bond is weakest, it can be easily dissociated into H+ and I– ions while HF can be dissociated with maximum difficulty. Thus, HI is the strongest acid while HF is the weakest acid among the hydrogen halides.

Halogens form many binary compounds with oxygen but most of these are unstable. Fluorine forms two oxides OF2 and O2F2. However, only OF2 is thermally stable at 298 K while O2F2 is highly unstable and decomposes into elements even at 113 K. These oxides are called oxygen fluorides because fluorine is more electronegative than oxygen. Both these fluorides are strong fluorinating agents. O2F2 oxidises plutonium to PuF6 and this reaction is used in removing Pu as PuF6  from spent nuclear fuel.

On the other hand, the oxides of chlorine, bromine and iodine are called oxides. They form oxides from +1 to +7 oxidation states.

The stability of oxides formed by halogens decreases as :

Bromine oxides are least stable. Iodine-oxygen bond is stable because of greater polarizability of I while the stability of chlorine oxygen bond is due to multiple bond formation involving d-orbitals of Cl atom.

Chlorine dioxide is the only one prepared on a large scale by the reduction of ClO3¯ with SO2 in strongly acidic medium :

All these oxides of chlorine are powerful oxidising agents and decompose explosively when subjected to mechanical shock or heat. ClO2 and Cl2O are used as bleaching agents for paper, pulp, textiles and water treatment.

The oxides of bromine Br2O, BrO2, BrO3 etc. are the least stable halogen oxides and exist only at lower temperatures. The oxides of iodine, I2O4, I2O5 and I2O7 are insoluble and decompose on heating. For example: I2O5 decomposes on heating above 673 K

It is strong oxidising agent. It oxidises H2S to sulphur and HCl to chlorine.It oxidises CO to CO2 quantitatively liberating iodine which can be titrated against sodium thiosulphate.

Halogens react with metals to form metal halides. For example: Bromine reacts with magnesium to give magnesium bromide.

Fluorine is most reactive and the reactivity decreases as we move down the group.The ionic character of the metal halides decreases in the order :

(4) Reactivity of Halogens towards Halogens