(iv) non-availability of d-orbitals in the valence shell.

Nitrogen has unique tendency to form pπ-pπ multiple bonds with itself and with other elements having small size and high electronegativity (e.g., C and O).

However, the heavier elements of this group do not form pπ-pπ bonds because their atomic orbitals are so large and diffuse that they cannot have effective overlapping.

Nitrogen is a colourless gas and exists as diatomic. The two nitrogen atoms are held together by triple bond (one σ and two π) between two atoms and have very high bond enthalpy. Due to the presence of triple bond, which has very high bond enthalpy, the nitrogen molecule is inert and has very low reactivity. Phosphorus, arsenic and antimony exist in various forms containing single bonds as P-P, As-As and Sb-Sb.

For example: Phosphorus exists as P4 tetrahedral molecules. In this case, four P atoms lie at the corners of a regular tetrahedron. Each P is bonded to three P atoms by single P-P bonds. However, the single N-N bond is weaker than the single P-P bond because of high inter electronic repulsions of non bonding electrons owing to small bond length (109 pm). As a result, the catenation tendency is weaker in nitrogen. Therefore, nitrogen exists as gas white phosphorus exists as solid.

Since P-P single bond is much weaker than NΞN triple bond, therefore, phosphorus is much more reactive than nitrogen.

White phosphorus is more reactive than nitrogen. It catches fire when exposed to air, burning to form the oxide, P4O10. It is stored under water to prevent it. Red P is stable in air at room temperature but reacts on heating.

Arsenic and antimony both occur in two forms. The most reactive is yellow form which contains M4, tetrahedral units and resembles white phosphorus. Arsenic is stable in dry air but tarnishes in moist air giving first a bronze and then a black coating on its surface.

Antimony is leas reactive and is stable towards water and air at room temperature. On heating in air, it forms Sb406, Sb408 or Sb4O10.

Nitrogen does not have d-orbitals in its valence shell. Nitrogen cannot form pπ-dπ bonds whereas Phosphorus and other heavier members of this group readily form pπ-dπ multiple bonds.

1. Reactivity towards Hydrogen (formation of hydrides)

All the elements of group 15 form gaseous trihydrides of the formula EH3, (where E=N, P, As, Sb or Bi) such as:

The lighter elements also form hydrides of the formula M2H4 such as N2H4 (hydrazine), P2H4 (diphosphine) and As2H4 (diarsine).

The trihydrides can be easily obtained by the hydrolysis of their binary metal compounds with water or dilute acids:

The trichlorides of these elements except that of bismuth give the corresponding hydrides on reduction with Zn/acid or LiAlH4.

Ammonia (NH3) is the most important trihydride of the group and is extensively used in the manufacture of nitric acid (HNO3) and important chemical fertilizers such as ammonium sulphate, urea, calcium ammonium nitrate, calcium cyanamide, etc.

It is prepared on an industrial scale by Haber process. In this process, nitrogen combines with hydrogen at 650-800 K under a pressure of 200-350 atm in the presence of iron catalyst and Mo as promoter.

Phosphine (PH3) can be prepared by heating white phosphorus with concentrated caustic alkali in an inert atmosphere of oil gas:

All these hydrides are covalent in nature and have pyramidal structure. These involve sp³ hybridization of the central atom and one of the tetrahedral position is occupied by a lone pair. Due to the presence of lone pair, the bond angle in NH3, is less than the normal tetrahedral angle. It has been found to be 107°. As we go down the group the bond angle decreases as:

Explanation: In all these hydrides, the central atom is surrounded by four electron pairs, three bond pairs and one lone pair. Now, as we move down the group from N to Bi, the size of the atom goes on increasing and its electronegativity decreases. The position of bond pair shifts more and more away from the central atom in moving from NH3, to BiH3.

For example: The bond pair in NH3, is close to N in N-H bond than the bond pair in P-H bond in PH3. As a result, the force of repulsion between the bonded pair of electrons in

NH, is more than in PH. In general, the force of repulsion between bonded pairs of electrons decreases as we move from NH3 to BiH3 and therefore, the bond angle also decreases in the same order. 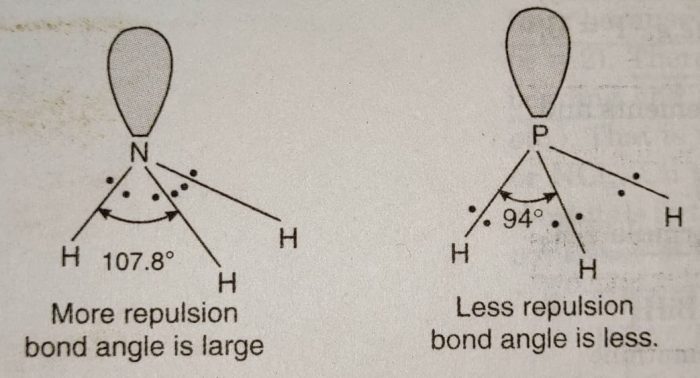 The important characteristics of these hydrides are :

1) Basic strength: All these hydrides have one lone pair of electrons on their central atom. Therefore, they act as Lewis bases. They can donate an electron pair to electron deficient species (Lewis acids). As we go down the group, the basic character of these hydrides decreases.

For example: NH3 is distinctly basic; PH3 is weakly basic AsH3, SbH3, and BiH3, are very

Explanation: Nitrogen atom has the smallest size among the hydrides. Therefore, the lone pair is concentrated on a small region and electron density on it is the maximum. Consequently, its electron releasing tendency is maximum.

The stability of the hydrides of group 15 elements decreases in the order:

For example: NH3 being most stable among the group 15 hydrides is not a good reducing agent. Ammonia at high temperatures reduces copper oxide to copper :

(iv) Boiling and melting points: Ammonia has a higher boiling point than phosphine and then the boiling point increases down the group because of increase in size.

Explanation: The abnormally high boiling point of ammonia is due to its tendency to form hydrogen bonds.

In PH3 and other hydrides, the intermolecular forces are van der Waals forces. These vander Waal’s forces increase with increase in molecular size and therefore, boiling points increase on moving from PH3 to BiH3.

2. Reactivity towards Oxygen (formation of oxides)

The elements of group 15 combine with oxygen directly or indirectly to form two types of oxides, E2O3 (trioxides) and E2O5 (pentaoxides).

Nitrogen forms a number of oxides with oxidation states ranging from +1 to +5 because of strong tendency of nitrogen to form pπ-pπ multiple bonds with oxygen.

The two common oxides of phosphorus are phosphorus (III) oxide and phosphorus (V) oxide, Phosphorus trioxide, P4O6 is a dimer of P2O3 and is prepared by heating white phosphorus in limited supply of oxygen.

Phosphorus (V) oxide is a dimer of P2O5 and is prepared by heating white phosphorus in excess of air or oxygen.

Because of strong affinity for water, P4O10 is used as a dehydrating agent. It can dehydrate HNO3 and H2SO4 to give N2O5 and SO3 respectively.

As4O6 and Sb4O6 are obtained by burning the metals in air or oxygen.Both are very poisonous. The stability of higher oxidation state decreases on descending the group.

The basic nature of oxides increases with increasing atomic number.

For example: P (III) and As (III) oxides are acidic, Sb (III) oxide S amphoteric and Bi (III) oxide is distinctly basic. It dissolves in acids to form salts.

3. Reactivity towards Halogens (formation of halides)

2) The three of the four sp3 hybrid orbitals overlap with 2p orbital of halogen atom to form three σ bonds.

3) The fourth sp3 hybrid orbital contains the lone pair of  electrons. Therefore, the geometry of trihalides may be regarded as pyramidal.

(i) The trihalides of group 15 elements are predominantly covalent with the ionic character increasing down the group.

For example: BiF3 is ionic while other halides of Bi, i.e., BiCl3, BiBr3, etc. and SbF5 are partly covalent and partly ionic.

(ii) The trihalides of nitrogen are the least stable.Though NF3 is stable, NCl3 is explosive. NBr3, and NI3, are known only as their unstable ammoniates i.e., NBr3.6NH3 and NI3.6NH3

(iii) The nitrogen triiodide ammoniate is stable only in the moist state. In the dry state, it explodes with noise when struck liberating vapours of iodine.

NCl3, NBr3 and NI3 are unstable because N-X bond is weak due to large difference in the size of N and X atoms.

NF3 is stable because of small difference in size of N (75 pm) and F (72 pm) resulting strong N-F bond. Because of stability of NF, it behaves quite differently from others.

It is unreactive and does not hydrolyse with water, dilute acids or alkalies. PF3 is rather less reactive towards water and is more easily handled than the other halides.

(iii) The trihalides are easily hydrolysed by water. However, the products are different in hydrolysis of different chlorides.

Antimony and bismuth trichlorides are only partially hydrolysed to form oxychlorides.

(iv) The trihalides of P, As and Sb (especially fluorides and chlorides) act as Lewis acids and combine with Lewis bases :

The pentahalides of group 15 elements are thermally less stable than trihalides. This is due to the following reasons:

(i) As we go down the group, the stability of +5 oxidation state decreases while that of +3 oxidation state increases due to inert pair effect. Therefore, the pentahalides of Bi are not known except for BiF5.

(ii) As the size of halogen atom increases from F to I, the strength of E-X bond decreases and the stearic hindrance increases. As a result pentabromides and pentaiodides are unstable.

Pentafluorides of P, As, Sb and Bi are known, while bromides and iodides of only P are known.

The pentahalides are prepared as:

1) The pentahalides of group 15 elements have trigonal bipyramidal geometry in which the central atom is sp3d hybridised. 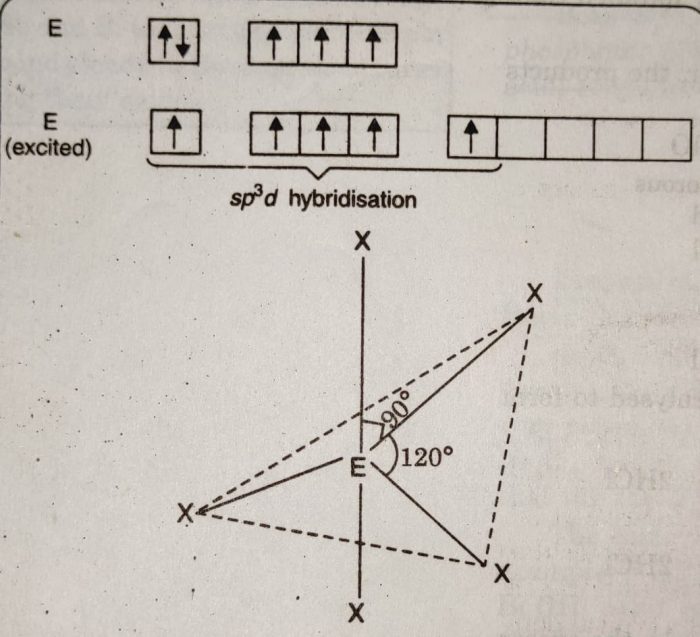 1) Pentahalides are thermally less stable than their corresponding trihalides. PF5 is molecular in both the gaseous and solid states. PCl5 exists as molecules in the gas phase but exists as [PCl4]+[PCl6]¯ in the crystalline state.

3) All the pentahalides behave as Lewis acids because of the presence of vacant d-orbitals. The central atom (except N) can accept a pair of electrons thereby expanding its coordination number to 6.

All the elements of group 15 combine with metals to form their binary compounds in which the elements show -3 oxidation state.