Alfred Werner a Swiss chemist, in 1892 prepared a large number of coordination compounds and studied their physical, chemical and isomeric behaviour by simple experimental techniques. He isolated cobalt compounds from the reaction of cobalt chloride and ammonia.
The earlier studies of cobalt complexes were precipitation reactions, conductance measurements and isomeric behaviour.

The number of ions furnished by a complex in a solution can be determined by precipitation reactions.

Similarly, the number of chloride ions precipitated in the case of the compounds CoCl3.4NH3 and CoCl3.3NH3 have been found to be 1 and none.

Werner attempted to assign structures of different coordination compounds by comparison of the number of known isomers and the number of theoretically possible structures.

Structures of Coordination Compounds on the Basis of Werner’s Theory 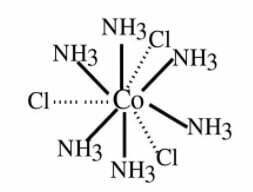 The primary valencies are ionizable and therefore, all the chloride ions would get precipitated on the addition of silver nitrate.
The species within the square brackets are also called coordination entities (or complexes). The ions outside the square brackets are called counter ions. Thus, in the coordination compound [Co(NH3)6Cl]3, [Co(NH3)6]3+ represents coordination entity and 3Cl¯ ions represent counter ions
The ionisation of the coordination compound is written as:
[Co(NH3)6Cl]3 ⇔ [Co(NH3)6]3+ + 3Cl¯
(2) CoCl3.5NH3 : In this compound, the coordination number of cobalt is 6 but now five positions are occupied by NH3 molecules and the sixth position by one of the chloride ions.This chloride ion has dual character as it satisfies secondary as well as a primary valency as indicated by a full line as well as a dotted line.The two Cl¯ ions satisfy the remaining two primary valencies of cobalt. This satisfies 6 secondary and 3 primary valencies of cobalt.However, on ionisation, only two Cl¯ ions will be precipitated because one Cl- ion which also satisfied secondary valency, will not be precipitated.

It may be formulated as
[CoCl2(NH3)4]Cl⇔ [CoCl2(NH3)4]+ + Cl‾
(4) CoCl3.NH3 : In the compound CoCl3.3NH3 ,three chloride ions satisfy primary and secondary valencies. All the chloride ions are non-ionisable and will not be precipitated by the addition of AgNO3. Therefore, the coordination compound behaves as neutral non- conducting molecule.

It may be formulated as [CoCl3(NH3)3] and does not ionise. 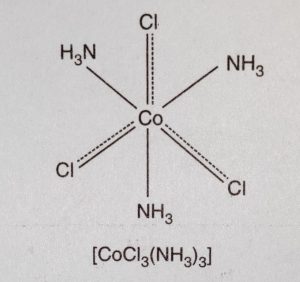 Behaviour of Coordination Compounds of Platinum