There is another important class of coordination compound known as metal carbonyls in which carbon monoxide (CO) acts as ligand. These are also called homoleptic carbonyls (compounds containing carbonyl ligands only). These compounds contain both σ and π character. These are formed by many transition metals.

Homoleptic binary metal carbonyls have simple well defined structures.
For Example
(a) tetracarbonyl nickel (0) is tetrahedral
(b) pentacarbonyl iron (0) is trigonal bipyramidal
(c) hexacarbonyl chromium (0) is octahedral
Some carbonyls have metal-metal bonds.
For Example
(a) decacarbonyl manganese (0) is made up of two square pyramidal Mn(CO)5 units joined by Mn-Mn bond.
(b) Octacarbonyl dicobalt (0) has a Co-Co bond bridged by two Co-Co groups.

Metal carbonyls are prepared by the direct interaction of the finely divided metal and carbon monoxide:

The metal-carbon bond in metal carbonyls possesses both σ and π character.
The reactivity of metal carbonyls is due to
(i) the metal centre of the carbonyl and
(ii) the CO ligands.

(1) In CO molecule the highest occupied molecular orbital is a lone pair projecting away from carbon atom.
(2) When CO acts as a ligand, this orbital (σ*2s) serves as a weak donor to the metal atom and forms a M ← C bond.
(3) The lowest unoccupied MOs of CO are the π* MOs. These vacant orbitals overlap with metal d-orbitals having π-symmetry. This results in a bond from filled d-orbitals on the metal into vacant orbitals on CO ligands. This is called back bond. 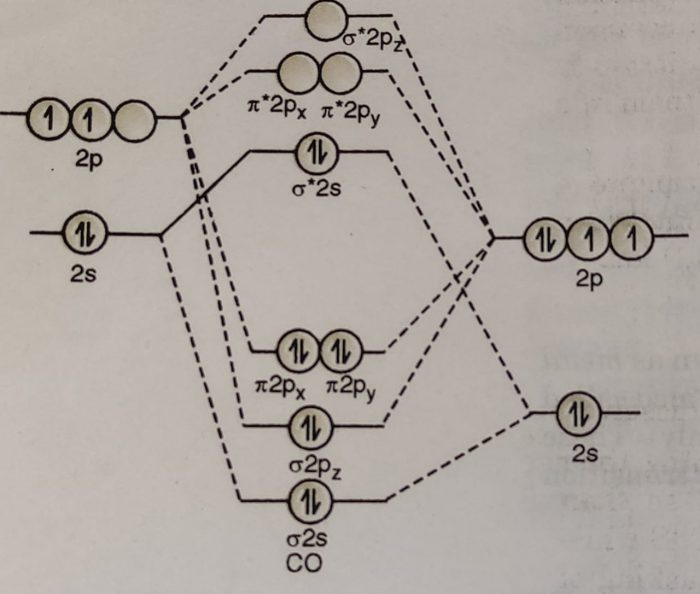 The bonding in metal carbonyls is described by the following steps:
(1) There is a donation of lone pair of electrons of carbon (of CO) into the suitable empty orbital of the metal atom. This is a dative overlap and forms a sigma M← C bond.
(2) There is a π-overlap involving donation of electrons from filled metal d-orbitals into vacant antibonding π* molecular orbitals of CO. This results into the formation of M→C π bond. This is also called back donation or back bonding.
The metal to ligand bonding creates a synergic effect which strengthens the bond between CO and the metal.