The formula of a compound is a shorthand method used to provide basic information about the constitution of a compound in a concise and convenient manner.

(1) The formula of the cation whether simple or complex is written first followed by that of the anion.

(2) The coordination entity is written in square brackets.

(3) The sequence of symbols within the coordination entity is : first the symbol of the central metal atom followed by ligands in alphabetical order.

The ligands in coordination entity are arranged as

(a) The different ligands are arranged alphabetically according to the first symbol of their formulae. For example, H2O , NH3, NO3¯, SO42- and OH¯ etc. are cited at H, N, N, O, S and O.

(b) When the two ligands have same defining atom, the ligand with fewer such atoms is cited first followed by the ligand having more atoms. For example, NH3 precedes N2

(c) If the numbers of defining atoms are equal, subsequent symbol decides the sequence.

For example NH2¯ precedes NO2¯ because H comes before O.

(d) Polydentate ligands are also listed alphabetically. In case of abbreviated ligand, the first letter of the abbreviation is used to determine the position of the ligand in alphabetical order.

(e) The formula for the co-ordination entity, whether charged or not, is enclosed in square brackets. Polyatomic ligands are enclosed in parentheses (), but all ligands are written without any separation in between.

(f)  There should be no space between the representations of ionic species within the formula.

(g) Sometimes abbreviations are used for formulae of the ligands. These abbreviations should be in lower case and enclosed in parenthesis.

For example, py is used for pyridine and en is used for ethane-1, 2-diamine or ethylene diamine.

(h) The number of cations or anions to be written in the formula is calculated on the basis that total positive charge must be equal to total negative charge.

Rules for naming the coordination compounds

In ionic complexes, the cation is named first and then the anion.
NaCl : sodium chloride
Non-ionic complexes are given a one word name.

In naming the coordination entity, the ligands are named first and then the central metal ion.

The names of anionic ligands (organic or inorganic) end in o-. In general, if the anionic ligand name ends in -ide, -ite or -ate, the final ‘e’ is replaced by ’o’ giving-ido,-ito and-ato respectively. For inorganic anionic ligands containing numerical prefixes such as triphosphate enclosing marks () are added. The names of positive ligands end in -ium. The neutral ligands are named as such.

However, there are a few exceptions in naming neutral ligands. For example,

When more than one ligands of a particular kind are present in the complex, the di-, tri-, tetra-, penta-, hexa-, etc. are used to indicate their number: two, three, four, five and six respectively.
When the name of the ligand, includes the numerical prefix (di, tri, tetra), the prefixes bis, tris, tetrakis are used for two, three, four ligands, respectively. Such ligands are called complexligands.
For example: to indicate two simple ligands such as chloro, bromo, ammine, oxalato, etc., we use the prefix di but to indicate two complex ligands such as ethylenediamine we use the prefix bis (ethylenediamine) or bis (1,2-ethanediamine).
The name of the complex ligand is given in brackets.
For example :
[Co(en)3]3+        tris(ethane-1,2,-diamine)cobalt(III) ion
[NiCl2(PPh3)2]    dichloridobis (triphenylphosphine)nickel(II)

Both cation and anion are complexes. The oxidation state of silver in both cationic and anionic complexes is +1. The name of the complex is diamminesilver (I) dicyanoargentate (I)

When a ligand can coordinate through more than one atom, then the point of attachment of the ligand is indicated by putting the symbol of the atom through which coordination occurs after the name of the ligand. For example: NO2¯ can coordinate through -N or -O. If it coordinates through N, it is called nitrito -N (or simply as nitro). If it coordinates through O, -ONO, it is called nitrito -O or simply as nitrito.
NO2¯ (through N)
-ONO¯ (through O)
Nitrito – N
Nitrito – O
SCN¯ (through S)  thiocyanato
NCS (through N)    isothiocyanato
For example,
[Co(NO2)3(NH3)3]  triamminetrinitrito-N-cobalt(III)
[Co(ONO)(NH3)5]SO4      pentaamminenitrito-O-cobalt(III) sulphate

Geometrical isomers are named by the use of the terms cis-to designate adjacent positions and trans- to designate opposite positions.
For example: in square planar complexes shown below
(a) the positions 1, 4 ; 1, 2 ; 2, 3 and 3, 4 are cis-
(b) 1,3 and 2, 4 are trans
In naming these complexes, cis or trans is written before the names of these compounds. Similarly, for octahedral complexes, cis- and trans are used in isomerism in coordination compounds. 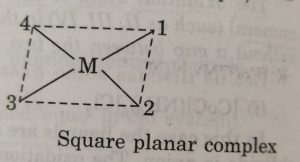 Optically active compounds are designated by the symbols (+) or d -for dextrorotatory and (-) or l- for laevorotatory.