The crystal field splitting will be different in different structures with different coordination numbers.

The energy difference between the two sets of energy levels is called crystal field splitting energy and is represented as Δ° (the subscript ‘o’ stands for octahedral).

It measures the crystal field strength of the ligands.

The spectrochemical series is an experimentally determined series based on the absorption of light by complexes with different ligands.

(b) In the ligands lying above H2O are called strong field ligands and they cause greater crystal field splitting (or high Δ°).

(c) The ligand water and below it are called weak field ligands and they cause lesser crystal field splitting (or low Δ°).

Electronic Structure and Properties of complexes According to C.F.T.

According to Hund’s rule electrons occupy a set of orbitals of same energy one at a time with their spins parallel. The electrons only pair up after each orbital gets one electron. So, for complexes having upto three d-electrons (d1, d2 and d3) each electron can occupy a separate orbital in the lower set.

For a d4 complex, there are two possibilities : (a) All the four electrons may occupy lower set of orbitals with one electrons gets paired i.e. t2g4 It experiences a strong repulsion from the electron already there.

Which electronic configuration is possible or has the lower energy depends upon the relative magnitude of the crystal field splitting ( Δ°) and the pairing energy, P (P represents the energy required for electron pairing in a single orbital).

(a) The crystal field splitting energy depends upon the nature of ligands attached. If Δ° is large (as it is for strong field ligands), the electrons will try to remain in the lower set of orbitals. The complex has less number of unpaired electrons and is called low spin complex. The repulsion due to pair of electrons will be less than Δ°
(b) If Δ° is small (as it is for weak field ligands) , then after filling the lower set of three orbitals with one electron each, the next electron goes to the higher set of orbitals. In this case, the repulsion due to pairing of electrons will be more than Δ° . The pairing of electrons will occur only after all the five orbitals are singly filled. In this case, the complex will have maximum number of unpaired electrons and is called high spin complex. 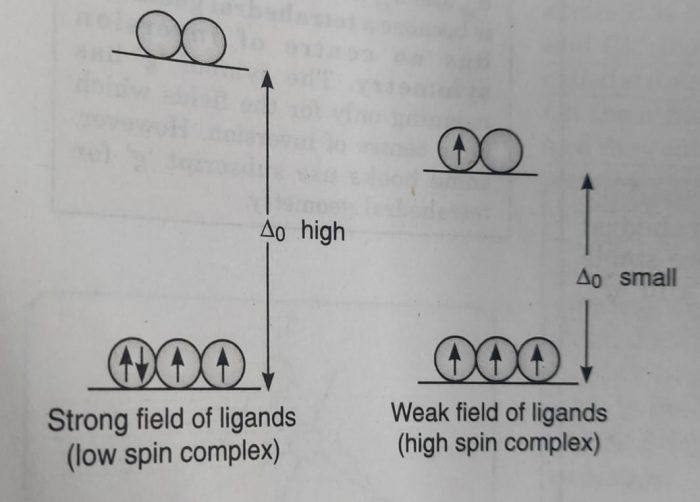 The actual configuration adopted by the complex is decided by the relative values of Δ° and P where P represents the energy required for electron pairing in a single orbital.
(a) If Δ° is less than P (Δ° < P), we have weak field, the fourth electron will enter one of the eg orbitals giving the configuration, t2g3 eg1. It will be high spin complex.
(b) If Δ° is more than P(Δ° > P), we have strong field and the pairing will occur in the t2g orbitals with eg orbitals remaining unoccupied giving the configuration t2g4. It will be low spin complex.
Thus, we can easily predict whether an octahedral complex is likely to be high spin or low spin complex by noting the position of the ligands in the spectrochemical series.
Strong Field Ligand form = Low spin complex
Weak Field Ligand form = High spin complex.
(1) The complexes of Fe (III) such as [Fe(CN)6]3- and [Fe(H2O)6]3+
Fe3+ has 3d5 electronic configuration having five electrons. Now, CN¯ is a strong field ligand and we expect large splitting of d-orbitals. As a result, the five d-electrons will try to remain in lower set and will pair up. This results in low spin complex which will have only one unpaired electron.
H2O is a weak field ligand and we expect small splitting of d-orbitals. As a result, after filling one electron each in lower set of orbitals, the remaining two electrons will go to the higher set of orbitals. Thus, the complex will be paramagnetic due to the presence of five unpaired electrons. It is also called high spin complex. 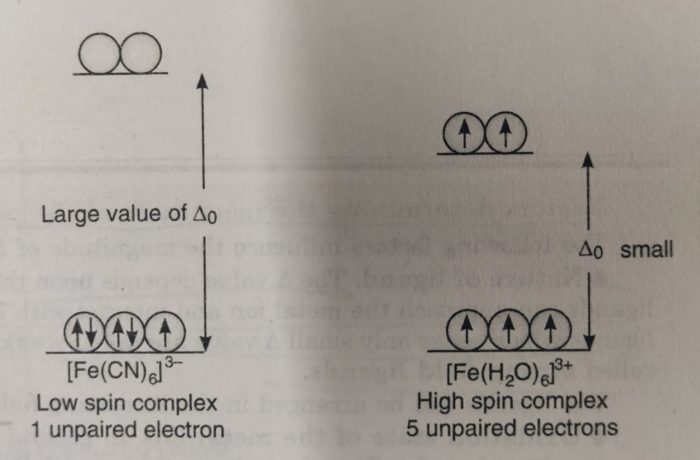 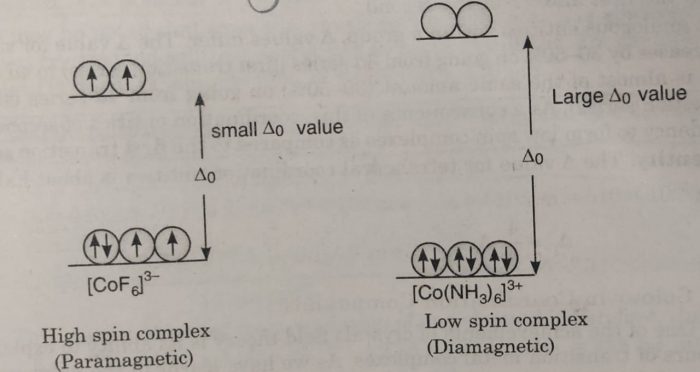 Factors determining the magnitude of the orbital splitting energy Δ°
The following factors influence the magnitude of Δ°
(1) Nature of ligand: The Δ° value depends upon the nature of the ligand. The greater the ease with which the ligands can approach the metal ion and interact with it, the greater will be the crystal field splitting energy. The ligands which cause only small Δ° value are called weak field ligands while those which cause a large A value are called strong field ligands.
(2) Oxidation state of the metal ion: The higher the ionic charge on the central metal ion, the greater the value of Δ°. Therefore, the metal ion with higher oxidation state causes larger Δ° than is done by the ion with lower oxidation state.
(3) Nature of the metal ion:  The A coordination entities of second and third transition series have a greater tendency to form low spin complexes as compared to the first transition series.
(4) Geometry of the coordination entity: The Δ° value for tetrahedral coordination entities is about half the Δ° value for octahedral entities i.e.
Δt ≈ 4/9 Δ°

Most of the transition metal complexes are coloured in their solid or solution form.
The transition metals have the property to absorb certain radiations from the visible region of the spectrum and as a result, the transmitted or reflected light is coloured. The visible light (white light), as we know is a mixture of  radiations of many wavelengths ranging from blue (about 400 nm) to red (about 700 nm).
When some of these wavelengths are removed from a beam of white light by passing the light through a sample, then the transmitted light is no longer white.

In transition metal complexes, the energy difference between two sets of d-orbitals is very small. When visible light falls on them, the electron gets raised from lower set of orbitals to higher set of orbitals.

For example: In case of octahedral complexes, the electron goes from set of dxy, dyz, dzx to set of dx2-y2 and dz2 orbitals.

As a result of absorption of some selected wavelength of visible light corresponding to energy difference between these sets of energy levels, the transmitted light gives colour to complexes.

The energy corresponding to this transition corresponds to green and yellow lights which are absorbed from the white light, while the blue and red portions are emitted. The solution of complex [Ti(H2O)6]3+, therefore, looks purple.

The difference between different sets of orbitals in octahedral complexes vary from one metal ion to another and the nature of the ligands, therefore, different complexes absorb different amounts of energies from visible region and exhibit different colours.
For example: let us consider three complexes of Co3+ as [Co(H2O)]3+, [Co(NH3)6]³+ and [Co(CN)6]3-
According to spectrochemical series, the crystal field splitting energies will be in the order of ligands as : H2O < NH3 < CN¯
Therefore, excitation energy will be smallest (largest wavelength absorbed) for [Co(H2O)]3+ complex and largest (smallest wavelength absorbed) for [Co(CN)6]3- complex. That is why,  [Co(H2O)]3+ absorbs orange colour and appears blue and [Co(CN)6]3- absorbs violet colour and appears as yellow. In the absence of ligands, the crystal field splitting does not occur and hence the substance is colourless.

For example: Removal of water from [Ti(H2O)6]Cl3 on heating makes it colourless. Similarly, anhydrous CuSO4 is white, but CuSO4⋅5H2O is blue in colour.
Example of [Ni(H2O)6]2+: This is formed when nickel chloride is dissolved in water. The aqueous solution of the complex has green colour. If the didentate ligand, ethane-1,2-diamine (en) is progressively added in the molar ratio of en : Ni as 1: 1, 2: 1 and 3: 1, the following series of reactions occur resulting different colour changes as :