You are here: Home / Class 12 / Chemistry / Chemical Kinetics / Rate of a Chemical Reaction

The feasibility of a reaction under the given experimental conditions can be predicted on, the basis of decrease in Gibbs energy (ΔG < 0). The extent to which a reaction proceeds can be explained with the help of equilibrium constant of the reaction.

The study of the rates of reactions also helps us to understand the pathways from reactants to products called mechanism of the reaction.

Rate of a chemical reaction

1) Some reactions are so rapid that they occur as soon as the reactants are mixed.The reactions involving ionic species are very fast.

For example: a) The precipitation of silver chloride occurs very quickly on mixing the solutions of silver nitrate and sodium chloride.

b) The neutralisation of an acid by a base occurs as soon as the two substances are mixed. It may be noted that these reactions involve only the ions and no bonds are broken. Therefore, they occur very fast. These reactions occur in about 10-12 to 10-16 seconds.

2) There are certain reactions which occur at an extremely slow speed.
For example: rusting of iron occurs so slowly

3) There are some reactions which occur in a conveniently measurable time and their rates can be measured easily in the laboratory.

(i) Hydrolysis of an ester in the presence of sodium hydroxide.

(iii) Inversion of cane sugar to give glucose and fructose

The rate of a chemical reaction is a measure of the speed with which the reactants are converted into products. It may be defined as the change in any one of the reactants or products per unit time.

The rate of the reaction may be expressed in either of the following to ways:

b) The rate of increase in concentration of P (products)

where the square brackets express the molar concentration and Δ[R] and Δ[P] are the changes in concentrations of R and P during time interval Δt.

Rate of reaction may be expressed as:

The square brackets around the substances are used to express the molar concentration (mol/litre).

We divide the rate of reaction defined with any of the reactants or products by the stoichiometric coefficient of that reactant or product involved in the reaction.

1) For the decomposition of gaseous nitrogen pentoxide (N2O5)

The average rate of reactions over the time interval (Δt).

Rate of reaction may be defined as the rate of change of concentration of any one of the reactants or products at a given time. Such a reaction rate is also known as instantaneous rate.

The time interval Δt is made as small as possible So that rate of reaction remains almost constant during that time interval.

For a general reaction, 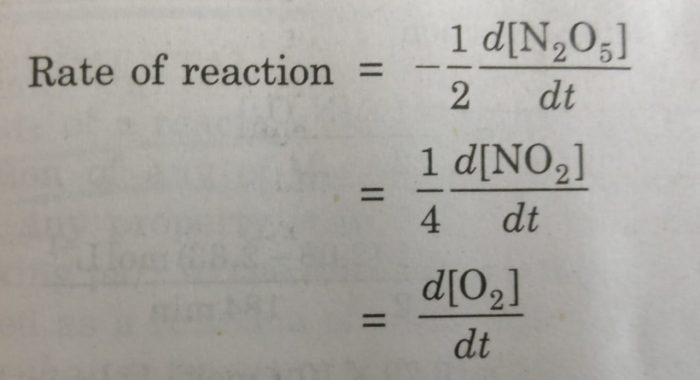 The rate of a reaction can be measured by plotting a graph between the concentration of any of the reactants (or products) as a function of time.

Decomposition of dinitrogen pentoxide. It decomposes in carbon tetrachloride medium as given below :

Then a graph is plotted between the concentration of N2O5 and time.The rate of reaction can be calculated by measuring the change in concentration during the time period.

Calculation of average rate of reaction

Then average rate is:

The concentration of reactant decreases with time making (x2-x1) a negative quantity. Thus, the minus sign makes the rate as a positive quantity.

Calculation of Instantaneous rate of Reaction