Question 1 What are gametes?

Question 2 What are the male gametes in human called?

Question 3 What are the female gametes in humans called?

Question 5 Draw a labelled diagram of egg or ovum?

Gametes are of 2 types:

Female gametes in animals is called egg or ovum. 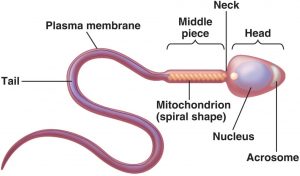 A sperm has a head, a middle piece and a tail.

A sperm is single cell with all the usual cell components like nucleus, cytoplasm and cell membrane.

The nucleus of sperm cell is tightly packed in its head. The sperm cells has very little cytoplasm. The purpose of tail is to make it move.

The sperms moves by waving its tail from side to side. The term sperm is the short form of the word spermatozoan.

Eggs or ova or ovum

Eggs are larger than the sperms. The human egg or ovum is round and about 0.15 mm in diameter.

The egg is also a single cell having nucleus, cytoplasm and a cell membrane.

Outside the cell membrane, an egg has a thin layer of jelly called jelly coat which allow only one sperm to enter into it during fertilisation.

Some of the animals like birds, reptiles have large eggs.

The nuclei of sperm and egg contain chromosomes which carry genes and transmit the characteristics of parents to offspring.