Question 2 What is a periscope?

Question 4 Explain how a hair dresser makes you see hair at the back of your head after the hair cut is complete?

Question 5 How many images of an object will be formed when the object is placed two plane mirrors which are inclined at the following angles:

Question 6 When an object is placed between two plane mirror inclined at an angle, then multiple images are formed? Explain?

Question 7 How can you show that white light consist of seven colours?

Question 8 What is meant by dispersion of light?

Question 10 Explain the construction and working of periscope?

Question 11 What happens when a beam of light is passed through a glass prism?

Question 12 What is the use of Kaleidoscope?

Characteristics of Image Formed by a Plane Mirror

(1) The image formed by a plane mirror is virtual (or unreal).

(2) The image formed by a plane mirror is behind the mirror.

(3) The image formed in a plane mirror is the same distance behind the mirror as the object is in front of it.

(4) The image formed in a plane mirror is of the same size as the object.

(5) The image formed by a plane mirror is erect

(6) The image in a plane mirror is laterally inverted.

For example : If we look into a big plane mirror, we will see the image of our whole body. We will notice that our image in the plane mirror has head on the top and feet at the bottom just like us.

Reflected Light can be reflected again

An optical instrument (or device) in which reflected light is periscope. 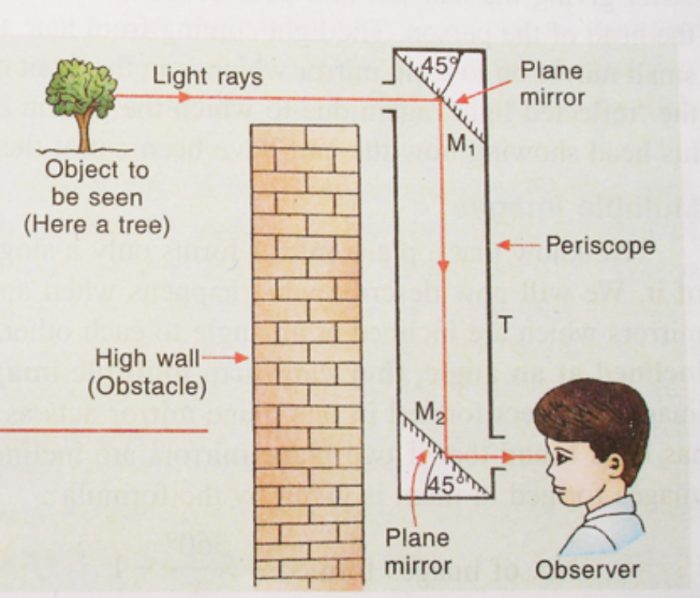 A periscope is a long, tubular device through which a person can see objects that are out of the direct line of sight.

By using a periscope, we can see the objects on the other side of a high wall which cannot be seen by us directly. The periscope makes use of two plane mirrors to see over the top of things.

A periscope works on the reflection of light from two plane mirrors arranged parallel to one another.

(1) A periscope consists of a long tube T having two plane mirrors M1, and M2 fitted at its two ends.

(2) The two plane mirrors are fitted in such a way that they are parallel to one another and their reflecting surfaces face each other.

(3) Each plane mirror, however, makes an angle of 45° with the side of the tube.

(1) The upper hole of periscope is turned towards the object to be seen so that the top mirror M1 , faces the object.

(2) We look into the periscope from the bottom hole in front of lower mirror M2. The light rays coming from the object fall on the plane mirror M1.

(4) Since the light rays coming from the object enter the eye of the person (or observer), it is possible to see the image of object through the periscope.

Some of the Uses of Periscopes

(1) A periscope is used to see over the heads of a crowd.

(2) A periscope is used by soldiers sitting in a trench (or bunker) to observe the enemy activities outside(over the ground).

When two plane mirrors are kept inclined at an angle, they can form multiple images of an object. This is because the image of object formed in one plane mirror acts as object for the other plane mirror.

If two plane mirrors are inclined at an angle x, then the number of images formed in them is given by the formula:

Thus, two plane mirrors inclined at an angle of 90° form three images of an object placed between them.

We can see a large number of images of ourselves if we stand before two plane mirror hanging on opposite walls. This is because our image formed in one mirror acts as object for the other mirror, and this process goes on and on, resulting in a large number of images. We can not see all the images because they become fainter and fainter with the increasing number of reflections of light. 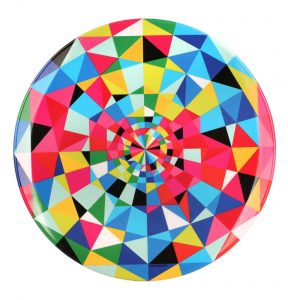 (1) The kaleidoscope consists of three long and narrow strips of plane mirrors inclined at 60°  to one another forming a hollow prism, and fitted into a cardboard tube.

(2) One end of the cardboard tube is closed by an opaque disc (cardboard disc) having a small hole at its centre.

(3) The other end of cardboard tube is closed with two circular discs of glass : the inner disc being of transparent glass (clear glass) and the outer disc of ground glass (translucent glass).

6) If we turn the kaleidoscope tube slightly, the glass pieces will rearrange and produce a new pattern.

7) A kaleidoscope produces hundreds of ever-changing coloured patterns (or designs). In Kaleidoscope we can never see the same pattern again. Every time a new pattern is formed. Kaleidoscopes are used by designers of wall papers and fabrics, as well as by artists to get ideas for new patterns.

The sunlight is referred to as white light. The white sunlight actually consists of seven colours.

Take a glass prism and place it on a table in a darkened room. Place a white cardboard screen at some distance behind the prism. Allow a thin beam of sunlight (coming through a tiny hole in the window) to fall on the prism. We will see that the beam of white sunlight splits on entering the glass prism and forms a broad patch of seven colours (called spectrum) on the white screen placed on the other side of prism.

The splitting up of white light into seven colours on passing through a transparent medium like a glass prism is called dispersion of light.