Question 1 Which part of cell carry out respiration?

Question 3 What do chloroplast contain?

Question 4 What kind of cell are surrounded by a cell wall?

Question 5 What sort of cells do not have cell wall around them?

Question 6 Name the layer which is outside the cell membrane of a plant cell?

Question 8 Which part of plant cell releases energy from food?

Question 9 What causes the red colour in tomatoes?

Question 10 Which type of cell has large vacuole?

Question 11 Explain the function of mitochondria in a cell?

Question 12 What is the function of cell wall in a plant cell?

Question 13 What is cellulose?

Question 14 What is the function of plastid?

Question 15 What is cell sap?

Question 16 What are the functions of vacuoles?

Question 17 Why chloroplast are green in colour? 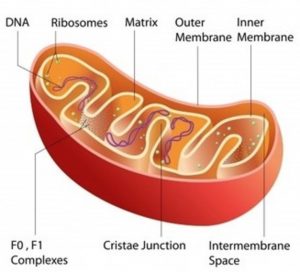 Mitochondria are the tiny rod shaped organelles which are found in all cells.

They provide energy for all activities of the cell.This energy is produced by the process of respiration in which food is broken down by oxygen.Mitochondria use glucose and oxygen to produce energy.

The plant cell wall is made of a tough material called cellulose.Cell wall gives shape and support to the plant cell.

The plant cells have a thick cell wall around them.Cell wall give plants most of their strength.Plants need protection against high wind speed, variations in temperature and atmospheric moisture.The tough cell wall present in plant cells provide protection to plants.

Cell wall is not there in animal cell.The cell wall is a non-living part of the plant cell. 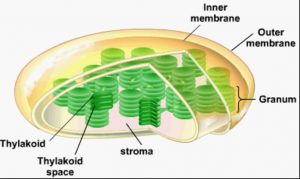 They are green coloured organelles present in the cytoplasm of plant cells.

The process of food making by plants  known as photosynthesis takes place in chloroplasts.The green colour of chloroplast is due to the presence of a green pigment called chlorophyll in them.Chlorophyll can absorb sunlight energy.

In chloroplast, carbon dioxide and water combine in the presence of sunlight energy to produce food such as glucose.They are found only in those plant cells which carry out photosynthesis.

The organelles containing pigments present in the cytoplasm of plant cells are called plastids.The plastids containing green pigment(chlorophyll) are known as chloroplasts. 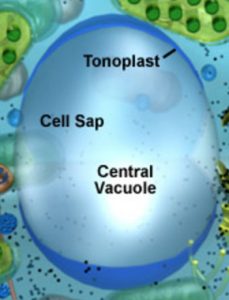 It is a space in the cytoplasm of a cell which is enclosed by a membrane and usually contains substances dissolved in water.

All the plant cell have a large vacuole.The vacuole is filled with a liquid called cell sap, which contains dissolved sugar and salts.

2)The function of vacuole in a cell is to store various substances including waste products of the cell.