Question 1 What happens if it does not rain in a region for a year or more?

Question 2 What is the importance of water cycle in nature?

Question 4 Explain how heavy rain cause flood? What damage is caused by floods?

Question 5 What is drought? When does drought occur?

Question 6 What are the problems faced by the people living in areas having drought conditions? 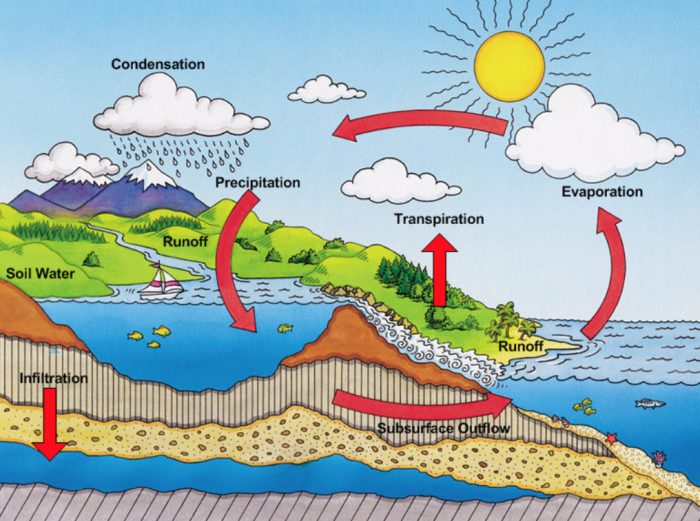 The continuous circulation of water from the earth’s surface to atmosphere and from the atmosphere back to earth is called water cycle in nature.

Water is present on the earth in rivers, lakes, ponds, oceans and soil. Some water is also present under the ground.

The occurrence of water cycle in nature is a continuous process.

Importance of Water Cycle in Nature

Water cycle is important because of the following reasons:

(1) Water cycle makes fresh water available in the form of rain: The sea-water is highly salty which is not fit for drinking by animals or for the growth of plants. But the rain water is pure water. It can be utilised by animals as well as plants.

(2) Water cycle keeps the amount of water on the earth’s surface constant: This is because the water removed from the earth during evaporation and transpiration is put back to the earth during rain and snowfall.

If It Rains Heavily

The time, duration and amount of rainfall varies from place to place. In our country, most of the rainfall occurs in the monsoon season (rainy season).

Rains give us many advantages

(1) Rains bring relief by cooling the environment after hot summer days.
(2) The sowing of many crops depends on the arrival of rains during monsoon.
(3) Rains provide water in the rivers and dams of hydroelectric power plants.
(4) Rains fill the lakes and ponds which act as sources of water.
(5) Rains are also responsible for the groundwater which gets stored under the surface of earth.

When it rains heavily for a long time, we get excess rainfall resulting in too much water all around. The excessive rainfall due to heavy rains leads to many problems.

Some of the Problems caused by Heavy Rains

(1) Heavy rains in city areas lead to waterlogged roads and streets. This disrupts the traffic on roads and causes inconvenience to the people.

(2) Heavy rains (or excessive rains) may cause floods. Heavy rains lead to too much rise in the level of water in rivers. The river water starts overflowing from its banks and spreads over a large area of land causing floods . The flood water may submerge cities, villages, crop fields, and forests causing damage to property (houses, etc.), human life, domestic animals, standing crops, and wild animals of the forests.

(3) The animals living in water are carried away by the fast flowing flood waters.

(4) Heavy rains also kill the animals living in soil because such animals do not get air to breathe when all the soil gets covered with flood water.

If It Does Not Rain For a Long Period

If it does not rain in a region for a long time it causes drought.

Drought is a long period without rains leading to severe shortage of water in the region.

The soil in the fields is normally moist because it has water in it .The soil continues to lose water by evaporation and transpiration. The water lost by soil is usually made up by rains . If it doesn’t rain at all (or the rainfall is very low) for a long period, the loss of water from the soil is not made up and hence the soil becomes dry.

Due to lack of rains, the water level in the lakes and ponds also goes down and some of them may even dry up completely. In the absence of rains, no water seeps into the ground and hence the level of groundwater in wells, etc., falls drastically. Due to this the groundwater also becomes scarce.

The lack of rains for long periods may cause drought.

Some of the problems faced by the people because of drought in an area are as follows:

(1) The soil does not have sufficient moisture (or water) to grow crops well. Since the crop plants do not grow well, drought leads to severe shortage of food for the people in that region.

(2) The vegetation such as grass and other fodder does not grow well and leads to shortage of fodder for the domestic animals (like cows and buffaloes).