Question 1 what are stationary objects. Give examples?

Question 2 What is meant by circular motion? Give example?

Question 3 What is meant by rectilinear motion?

Question 4 What is meant by rotational motion? Give example?

Question 5 What is meant by periodic motion? Give example?

Question 6 When an object is said to be in motion?

Question 7 Give few examples to show that object can have more than one type of Motion?

Question 8 Give a difference between circular motion and rotational motion?

On the other hand, men, women, animals, birds, car, bus, bicycle, train, aeroplane, ship etc. do not remain stationary all the time, they can move from one place to another. The movement of an object is called motion.

A common characteristics of all the moving bodies is that they change their position with time. An object is said to be in motion (or moving) when its position changes with time.

For example: When the position of a car changes with time, we say that the car is moving or that car is in motion.

If an object is fairly fast, then its movement (or motion) can be observed easily. But if an object moves very slowly, then it becomes difficult to observe its movement immediately.

For example: A wrist watch has three hands i.e. a second’s hand and  minute’s hand and an hour’s hand, which move round and round on the dial of the watch. Now, the seconds’ hand of a watch moves quickly, so we can observe the movement of the seconds’ hand of a watch very easily. But the minutes hand and hours hand of the watch move quite slow, so their movement can not be observed easily.

When an object is stationary (not moving), it is said to be at rest e.g. house and tree are stationary, they are not in motion.

Motion in a straight line is called Rectilinear motion, e.g.

(2) The motion of a cyclist running on a straight road is Rectilinear motion.

(4) The motion of a sprinter (short distance runner) running on a straight track is also called Rectilinear motion.

When an object moves along a circular path, it is called circular motion.

(2) The movement of artificial satellites around the earth is also circular motion.

(3) The movement of earth around the Sun is also an example of circular motion.

(4) Movement of all the planets around the Sun is circular motion.

(5) The movement of tip of the hand of a watch on the dial.

(6) A ceiling fan remains at one place but its blades rotate in circular motion.

(7) The round and round movement of a child sitting on a merry go round (or a giant wheel) is also circular motion.

(8) An athlete running on a circular track inside a stadium.

(9) A bull tied to rope an moving around a fixed pole is also an example of circular motion.

The motion which repeats itself after regular intervals of time, is called periodic motion.

(2) The revolution of earth around the sun is periodic motion because the earth always takes the same amount of time to complete one round around the sun.

(3) The rotation of earth on its axis is a periodic motion because the earth always takes the same time to rotate once on its axis.

(5) Swinging of a pendulum; motion of pendulum of a “pendulum clock”; motion of a child on a swing ” motion of the branch of a tree moving to and fro.

(6) The orbiting of a satellite around the earth, the vibrations of stretched membrane of a drum ( dholak or tabla) when struck.

A pendulum consists of a small metal ball (also called as bob) suspended by a long thread from a rigid support, such that the bob is free to swing back and forth. Initially the pendulum is at position B. If we pull the bob a pendulum a little to the left side up to position B and then release it, the pendulum bob starts moving like a swing between positions A and C. The swinging of pendulum bob from position A to C, and back to A is called one vibration. A pendulum always takes the same time to complete its “one vibration” or oscillation. since a pendulum repeats its vibrations regularly after fixed time intervals, therefore, a vibrating pendulum or swinging pendulum is said to have a periodic motion. 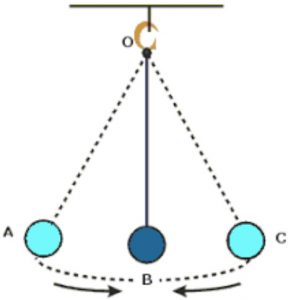 When an object turns (or spins) about a fixed axis, it is called rotational motion.

Object which can have more than one type of Motion