Question 1 What are magnetic material? Give example?

Question 2 What are non-magnetic materials? Give example?

Question 3 A pencil sharpener gets attracted by both the poles of a magnet although its body is made of plastic. Explain?

Question 4 What name is given to the two ends of a magnet where the attraction is  strongest?

Question 5 Name the two magnetic poles with attract each other?

Question 6 Name the two magnetic poles which repel each other?

Question 7 What is a magnet?

Question 9 Of what materials are magnets usually made of?

Question 10 What is meant by poles of a magnet? Where are the poles of magnet located?

Some of the other types of magnets are horseshoe magnet, U-shaped magnet, cylindrical magnet (or rod magnet), button magnet and ring magnet. 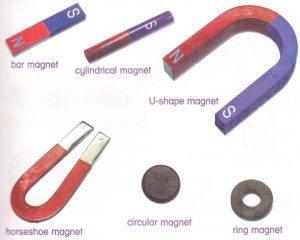 Magnets were discovered by chance by an old shepherd named Magnes. He used to take his herd of sheeps and goats to a nearby mountain for grazing. He always took a wooden stick with him to manage his herd of sheep and goats. The wooden stick had an iron casing at its lower end. One day, Magnes suddenly felt that something was pulling his stick away from him. It appeared as if the iron covered end of stick was being attracted by a rock and got stuck to the rock. Magnes had to pull hard to free the iron end of stick from the rock. Actually, the rock was a natural magnet which attracted the iron end of Magnes stick. This rock which behaved like a magnet was given the name ‘magnetite. Magnetite rock contains iron.

The magnetite attracted pieces of iron towards itself. And when a thin strip of magnetite was suspended from a thread so that it could rotate freely, the magnetite strip always aligned itself in the same direction (north-south direction). One end of the freely suspended magnetite strip always pointed towards the north direction. Due to this property, the freely suspended mangetite strips were used by sailors in the ships to find directions in olden times (because they always pointed in the north direction). Since magnetite was used to find directions to lead the way for ships, it was also called ‘lode stone‘ (which means leading stone). The pieces of magnetite rock are known as natural magnets.

The objects made of non- magnetic materials are also non-magnetic in nature. Thus, a wooden spoon, a plastic scale, pencil, rubber, eraser, copper wire, aluminium can, brass utensils, a book, leather shoes, and wood shavings, etc. are all non-magnetic objects.

(1) If a large number of pins from a pin box fall on the floor and get scattered, we can collect all the pins quickly by using a magnet (instead of picking up each and every pin by hand). So, if we move a magnet over the pins scattered on the floor, all the pins (being magnetic) will get attracted to the magnet and stick to it.

Poles of a Magnet 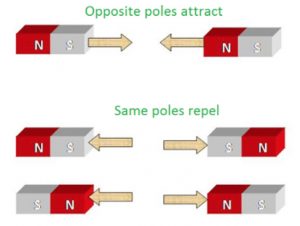 The north pole and south pole of a magnet always exist together. Every magnet, whether big or small, has a north pole and a south pole. It is impossible to have a magnet having only one pole. Some force of attraction also exists in the middle part of the bar magnet but it is very small.