Question 1 Give few examples of changes which are observed in our everyday life?

Question 2 What is meant by reversible change? Explain with example?

Question 3 State some of the ways of bringing about changes in materials around us?

Question 4 Explain how iron blade of a spade is fixed to a wooden handle?

Question 5 Give example of a beneficial change?

Question 6 Give example of a harmful change?

Question 7 Explain how a metal rim is fixed around the wooden wheel of a cart?

Also Read NCERT Solutions for Chapter 6 Changes Around Us

Things around us have certain properties such as state (solid, liquid or gas), position, shape size, colour, temperature, composition and structure. When one or more properties of a thing become different, we say that it has changed or a change has taken place in it.

When ice melts it forms water. Now, we know that ice is a solid whereas water is liquid. So, the melting of ice involves a change in state (from solid state to liquid state).

Examples of important changes in everyday life are formation of curd from milk, burning of fuels, drying of clothes, rusting of iron, Melting of ice, Boiling of water (or Evaporation of water); making of chapatis from flour; burning of fire works, germination of seeds, flowering of plants, ripening of fruits, shedding of leaves by trees, growth of human beings and animals, formation of day and night, position of sun in the sky, changes in seasons, changes in weather and rainfall etc.

Some changes are beneficial to us whereas some are harmful to us. The beneficial changes take place faster but the harmful changes are either stopped or made to go slow. For instance, the ripening of fruits is beneficial change. So, we try to make the ripening of fruits faster by using artificial methods. On the other hand the spoiling of cooked food is a harmful change, so we try to slow down this change by keeping the cooked food in refrigerator.

The change in a material (or object) does not occur on its own. There is always a ’cause’ which brings about a change in material.

Heat is the cause of the change of state of ice from solid to liquid . Some of the ways of bringing about changes in materials are by applying heat, light, electricity, or force.

A substance undergoes a change to form a ‘new substance’ only when certain agents like heat, light, electricity or force etc. are applied on it. Some of the changes can be reversed whereas other changes can not be reversed. So, all the changes around us can be classified into two groups:

A change which can be reversed to form the ‘original substance’ is called a reversible change.

Ice is a solid substance. When we heat ice, it melts to form liquid water. A change from solid to liquid takes place during the melting of ice. If we cool the water from ice to water, by heating, has been reversed by cooling. Thus, the melting of ice (to form water) is a reversible change.

Examples of reversible changes  are:

When we boil water by heating, then it changes into steam. Now, if we cool the steam, then water is formed again. So, the changing of water into steam has been reversed by cooling. Thus, the boiling of water (or evaporation of water) is a reversible change.

Coal tar is a black, solid material which is used in making and repairing roads. When coal tar is heated, it melts to form a thick black liquid. The melting of coal tar on heating, is a reversible change because when hot, molten coal tar gets cooled, it solidifies again. The  piece of iron metal is heated in a furnace till it becomes red-hot. At red-hot stage, the piece of iron becomes soft. The red-hot piece of iron tool is cooled, it becomes hard again. The softening of iron on heating to red hot stage is a reversible change. This is because when red hot iron is cooled, it becomes hard again.

Fixing of iron Rim to the Wooden Wheel of a Cart 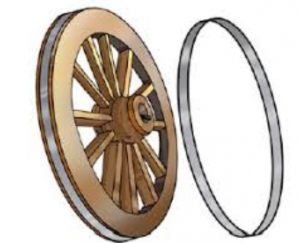 Wooden wheels of bullock carts and horse carts (tongas) have thin iron rims (or thin iron types) around them. The iron rims are fitted around wooden wheels by the process of expansion on heating (followed by contraction on cooling).

Fixing of Iron Blade of Digging Tool to a Wooden handle

The iron blade of a soil digging tool (like a spade) is fixed to a wooden handle by the process of expansion on heating.