Home » Class 6 » Science » Air Around Us » Oxygen and Nitrogen

Question 3 Why do mountaineers carry oxygen cylinders with them while climbing high mountains?

Question 4 How will you show that oxygen or air is necessary for burning?

Question 5 Explain why, if the clothes of a person catches fire accidentally, he is covered with a woollen blanket? Give answer?

Question 6 Why do sea divers carry oxygen cylinders with them?

Also Read NCERT Solutions for Chapter 15 Air Around Us

(1) Nitrogen is a colourless, tasteless and odourless gas.

(3) Nitrogen gas is not essential for breathing (or respiration).

(4) Nitrogen gas neither burns itself nor supports the process of burning.

(5) Nitrogen is a very unreactive gas.

(6) All the living things need nitrogen compounds for their growth. The plants use nitrogen gas of the air to make proteins.

(7) These proteins are used by the plants for their own growth as well as for the growth of human beings and other animals.

(1) Oxygen is a colourless, tasteless and odourless gas.

(3) Oxygen gas is essential for breathing (or respiration).

(4) All the living things need oxygen of air for breathing.

(5) Oxygen gas does not burn itself but it allows other things to burn in it. So, oxygen is a supporter of burning (or supporter of combustion).Thus, oxygen supports life and combustion.

Oxygen is necessary for living things

We can also say that oxygen is necessary for breathing. All the living things (animals and plants) use the oxygen of air for respiration. During respiration, oxygen breaks down food to give carbon dioxide, water and energy.

Three such special situations areas are patient having breathing difficulties, a mountaineer climbing a high mountain and a diver going into deep sea.

Oxygen is Necessary for Burning (or Combustion)

Activity : Air (or oxygen) is necessary for the burning (combustion) of things 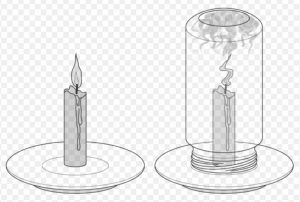 We take a candle and fix it on a table. The candle is lighted by using a burning matchstick. The candle will continue to burn because fresh air is continuously available to the candle for its burning process. The fresh air supplies sufficient oxygen necessary for the continuous burning of the candle.

We conclude that air is necessary for burning of things. In fact, the process of burning cannot continue without a continuous supply of air (or oxygen).