You are here: Home / Class 10 / The Human Eyes and The Colorful World / Human Eye

Question 1 Describe the working of the human eye with the help of a diagram?

Question 3 How does the eye adjust itself to deal with light of varying intensity?

Question 4 If you walk from a dark room into sunlight and back again into dark room, how would your pupils alter in size?

Question 5 Why we cannot see our seats first when we enter a darkened cinema hall from bright light but gradually they become visible?

Question 6 Why is a normal eye not able to see clearly the objects placed closer than 25 cm?

Question 7 What changes is made in the eye to enable it to focus on object situated at different distances?

Question 8 How is the amount of light entering the eye controlled?

Question 9 What happened to the eye when we enter a darkened cinema hall from bright sunlight? Give reason?

Question 10 Why does it take time to see objects in a dim room when you enter the room from bright sunshine outside?

Question 11 How ciliary muscles help in the normal functioning of the eye?

Question 12 What are rods and cones in the retina of an eye?

Question 14 What happens to the size of pupil of our eye in dim light  and in bright light?

Question 15 Define the term power of accommodation of human eye?

Question 16 What is the range of vision of a normal human eye?

Question 17 What is the far point of a normal human eye?

Question 18 What is the near point of a normal human eye?

The human eye works on the refraction of light through a natural convex lens made of transparent living material and enables us to see things around us.

Construction of the Eye 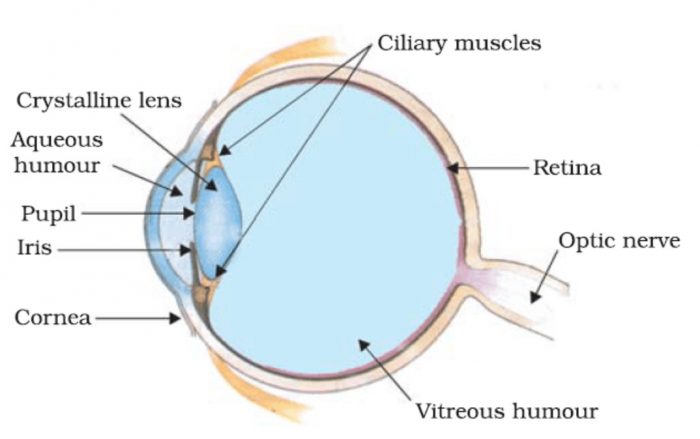 (1) The front part of the eye is called cornea. It is made of a transparent substance and it is bulging outwards.The outer surface of cornea is convex in shape. The light coming from objects enters the eye through cornea.

(3) There is a hole in the middle of the iris which is called pupil of the eye.The pupil appears black because no light is reflected from it.

(6) The screen on which the image is formed in the eye is called retina. The retina is behind the eye-lens and at the back part of the eye. The retina is a delicate membrane having a large number of light sensitive cells called rods and cones which respond to the intensity of light and colour of objects by generating electrical signals.

(7) At the junction of optic nerve and retina in the eye, there are no light sensitive cells (no rods or cones) due to which no vision is possible at that spot. This is called blind spot. Thus, blind spot is a small area of the retina insensitive to light where the optic nerve leaves the eye.

(8) There is an eye-lid in front of the eye which is just like the shutter in a camera. When eye-lid is open, light can enter the eye but when eye-lid is closed, no light enters the eye.

Working of the Eye

(1) The light rays coming from the object kept in front of us enter through the cornea of the eye, pass through the pupil of the eye and fall on the eye-lens.

(2) The eye-lens is a convex lens, so it converges the light rays and produces a real and inverted image of the object on the retina.

(3) The image formed on the retina is conveyed to the brain by the optic nerve and gives rise to the sensation of vision. Actually, the retina has a large number of light-sensitive cells.

Function of Iris and Pupil

If the amount of light received by the eye is small (as in a dark room or during night), the iris expands the pupil (makes the pupil large) so that more light may enter the eyes .

If outside intensity of light is high, then the pupil contracts so that less light enters the eye.

The adjustment of the size of the pupil takes some time.

(1) When we go from a bright light to a darkened cinema hall, at first we cannot see our surroundings clearly. After a short time our vision improves, and we can see the persons sitting around us. In bright sunlight the pupil of our eye is small. So, when we enter the darkened cinema hall, very little light enters our eye and we cannot see properly. After a short time, the pupil of our eye expands and becomes large. More light then enters our eye and we can see clearly.

(1) Rods are the rod-shaped cells present in the retina of an eye which are sensitive to dim light.We can see things to some extent in a dark room due to the presence of rod cells in the retina of our eyes.

Nocturnal animals (animals which sleep during the day and come out at night) like the owl have a large number of rod cells in their retina which help them see properly during the night when there is not much light. Rod cells of the retina, however, do not provide information about the colour of the object.

(2) Cones are the cone-shaped cells present in the retina of an eye which are sensitive to bright light (or normal light). The cone cells of our retina also respond to colours. Cone cells cause the sensation of colour of objects in our eves.

The cone-shaped cells of the retina make us see colours and also make us distinguish between various colours.When it is getting dark at night, it becomes impossible to see colours of cars on the road.

A normal eye can see the distant objects as well as the nearby objects clearly due to its power of accommodation.

(1) The rays of light coming from a distant object (at infinity) are parallel to one another when they reach the eye .The rays of light given out by the distant object are diverging in the beginning but they become parallel when they reach the eye after travelling a large distance. The parallel rays or light coming from a distant object need a convex eye-lens of low converging power to converge them or focus them to form an image on the retina of the eye. The convex eye-lens of low converging power is the one having a large focal length and it is quite thin.

(2) The rays of light coming from a nearby object are diverging (or spreading out) when they reach the eye. The diverging rays coming from a nearby object need a convex eye-lens of high converging power to converge them or focus them to form an image on the retina of the eye.The convex eye-lens of high converging power is the one having a short focal length and it is quite thick.

(1) When the eye is looking at a distant object (at infinity), then the ciliary muscles of the eye are fully relaxed.

The relaxed ciliary muscles of the eye pull the suspensory ligaments attached to the eye-lens tight.

The suspensory ligaments, in turn, pull the eye-lens due to which the eye-lens gets stretched and becomes thin (or less convex).

When the eye is looking at a distant object, the eye is said to be unaccommodated because it is the relaxed state of the eye.

The thin eye-lens is not powerful enough to converge the diverging light rays coming from the nearby objects onto the retina. So, to look at the nearby objects, the eye-lens has to change its shape and become thick (or more convex) to increase its converging power.

(2) When the same eye has to look at a nearby object, the ciliary muscles of the eyes contract.

When the eye-lens becomes more convex to focus the nearby objects, the eye is said to be accommodated. 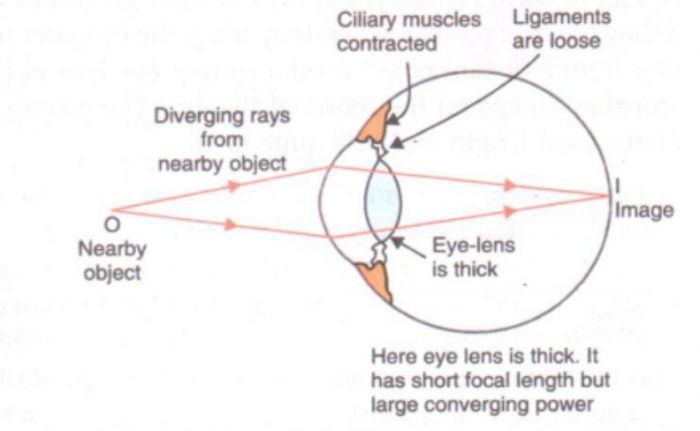 The ability of an eye to focus the distant objects as well as the nearby objects on the retina by changing the focal length (or converging power) of its lens is called accommodation.

The maximum accommodation of a normal eye is reached when the object is at a distance of about 25 cm from the eye. After this the ciliary muscles cannot make the-eye-lens more thick (or more convex). So an object placed at a distance of less than 25 cm cannot be seen clearly by a normal eye because all the power of accommodation of the eye has already been exhausted.

Thus, a normal eye has a power of accommodation which enables objects as far as infinity and as close as 25 cm to be focused on the retina.

The farthest point from the eye at which an object can be seen clearly is known as the far point of the eye.The far point of a normal human eye is at infinity.

The nearest point upto which the eye can see an object clearly without any strain, is called the near point of the eye.The near point of a normal human eye is at a distance of 25 cm from the eye.

The minimum distance an object must be placed so that a normal eye may see it clearly without any strain, is called the least distance of distinct vision.

The least distance of distinct vision for a normal human is 25 cm.The range of vision of a noraml human eye is from infinity to about 25 cm.