You are here: Home / Class 10 / The Human Eyes and The Colorful World / Glass Prism

Question 1 What happens when a ray of light is passed through a triangular glass prism?

Question 2 What will happen if another similar glass prism is placed upside down behind the first prism?

Question 4 What is spectrum?What is the name of glass shape used to produce a spectrum?

Question 6 What is meant by dispersion of white light?

Question 7 What is a rainbow?What are the two conditions necessary for the formation of a rainbow in the sky?

Question 8 Describe the formation of rainbow in the sky with the help of a diagram?

Question 9 With the help of a diagram explain the process of refraction?

They are inclined at an angle to one another.The angle between its opposite faces is called the angle of the prism.

Refraction of light through a Glass Prism 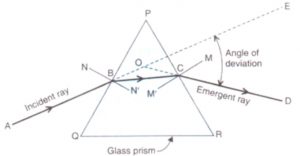 When a ray of light passes through a glass prism, refraction (or bending) of light occurs both, when it enters the prism as well as when it leaves the prism. Since the refracting surfaces (PQ and PR) of the prism are not parallel, therefore, the emergent ray and incident ray are not parallel to one another.

(1) A glass prism PQR has been kept on its base QR.

(3) When the ray of light BC travelling in the glass prism comes out into air at point C, refraction takes place again. Since the ray BC is going from glass (denser medium) into air (rarer medium), so it bends away from the normal MC and goes along the direction CD in the form of emergent ray.

If a beam of white light is passed through a triangular glass prism, the white light splits to form a band of seven colours on a white screen.

The splitting up of white light into seven colours on passing through a transparent medium like a glass prism is called dispersion of light.

The dispersion of white light occurs because colours of white light travel at different speeds through the glass prism. The amount of refraction (or bending) depends on the speed of coloured light in glass. Now, since the different colours travel at different speeds, they are refracted (or bent) by different angles on passing through the glass prism (some colours are bent less whereas others are bent more).

When white light consisting of seven colours falls on a glass prism, each colour in it is refracted (or deviated) by a different angle, with the result that seven colours are spread out to form a spectrum.

The red colour has the maximum speed in glass prism, so the red colour is deviated the least. Due to this the red colour forms the upper part of the spectrum. The violet colour has the minimum speed in glass prism, so the violet colour is deviated the maximum. Due to this violet colour appears at the bottom of the spectrum. The seven colours of spectrum differ only in their frequencies. These colours in the order of increasing frequency (but decreasing wavelengths) are: Red, Orange, Yellow Green, Blue, Indigo and Violet.

Re-Combination of Spectrum Colours to Give White Light 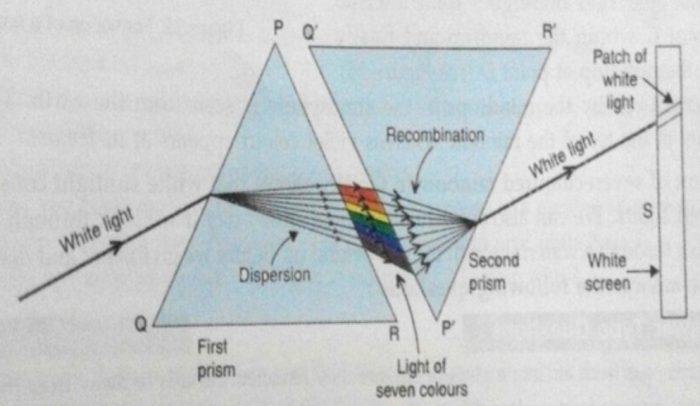 The seven coloured lights of the spectrum can be recombined to give back white light.

A triangular glass prism POR is placed on its base QR, and another similar prism P’Q’R’ is placed alongside it in the inverted position on its vertex P’ so that its refracting surface is in opposite direction. When a beam of white light is allowed to fall on the first prism PQR, then a patch of ordinary white light is obtained on a screen S placed behind the second prism P’Q’R’. 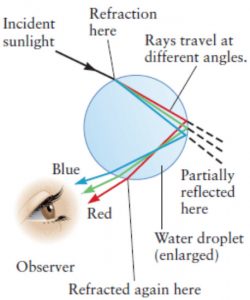 A rainbow is produced by the dispersion of white sunlight by raindrops (or water drops) in the atmosphere. Each raindrop acts as a tiny glass prism splitting the sunlight into a spectrum.

The raindrops in the atmosphere act like many small prisms. As white sunlight enters and leaves these raindrops (or water drops), the various coloured rays present in white light are refracted by different amounts due to which an arch of seven colours called rainbow is formed in the sky.

The formation of seven-coloured rainbow in the sky shows that white sunlight consists of a of seven coloured lights.