You are here: Home / Class 10 / Sources of Energy / Solar Energy

Question 1 Explain the principle and working of solar cooker?

Question 2 Why is solar cooker painted black from inside?

Question 3 Why is solar cooker box covered with a glass sheet?

Question 4 What kind of mirror is used in solar cookers and why?

Question 5 What are the advantages of solar cooker?

Question 6 What are the disadvantages of solar cooker?

Question 7 What is a solar cell?

Question 8 What are the advantages of solar cell?

Question 9 What are the disadvantages of solar cell?

Question 10 What is a solar cell panel?

Question 11 What is the purpose of using a solar cell panel?

Question 13 What is solar water heater?

Since the sun is very very, far away, only a small fraction of the solar energy radiated by the sun reaches the outer layer of the earth’s atmosphere.

The devices which work by using solar energy (or sun’s energy) are Solar cooker, Solar water heater, and Solar cell.

All the solar heating devices are designed in such a way that they help in collecting as much sun’s heat rays as possible. This is done by using a black painted surface, a glass sheet cover, also a plane mirror reflector.

A black painted surface is used because black surface absorbs more heat rays of the sun than a white surface. A glass sheet is used as a cover in solar heating devices because a glass sheet traps more and more of sun’s heat rays by producing greenhouse effect. A plane mirror reflector is used to increase the area over which solar energy is collected so that more heat rays of the sun may enter the solar cooker box.

The solar cooker is a device which is used to cook food by utilising the heat energy radiated by the sun.

(1) A solar cooker consists of an insulated metal box or wooden box which is painted all black from inside.

(2) There is a thick glass sheet cover over the box and a plane mirror reflector is also attached to the box.

(3) The food to be cooked is put in metal containers which are painted black from outside.

(4) These metal containers are then placed inside the solar cooker and covered with the glass sheet.

In order to cook food, the solar cooker is kept in sunshine, outside the house. The reflector of solar cooker is adjusted in such a way that it faces the sun. When the sun’s rays fall on the reflector, the reflector sends them to the top of solar cooker box in the form of a strong beam of sunlight. The sun’s heat rays pass through the glass sheet cover and get absorbed by the black inside surface of the cooker box. Once the sun’s heat rays enter the cooker box, then the glass sheet cover does not allow them to go back. In this way more and more heat rays of the sun get trapped in the box due to which the temperature in the solar cooker box rises to about 100°C to 140°C in two to three hours. This heat cooks the food materials kept in the black containers.

For example, the box-hype solar cooker cannot be used for baking (chapattis, etc) and for frying because they require stronger heating.

Advantages of a Solar Cooker

(1) The use of solar cooker for cooking food saves precious fuels like coal, kerosene and LPG.

(2) The use of solar cooker does not produce smoke due to which it does not pollute air.

(4) In a solar cooker, up to four food items can be cooked at the same time.

Disadvantages of a Solar Cooker

(1) The solar cooker cannot be used to cook food during night time.

(2) If the day-sky is covered with clouds, even then solar cooker cannot be used to cook food.

(3)The direction of reflector of solar cooker has to be changed from time to time to keep it facing the sun.

(4) The box-type solar cooker cannot be used for baking or for frying.

If a coil of copper tube painted black from outside is placed in a box similar to that of solar cooker, it will work as a solar water heater. This is because when water is passed through the copper coil, it will absorb sun’s heat rays and become hot. Solar water heaters are used to supply hot water in big buildings like hotels and hospitals. 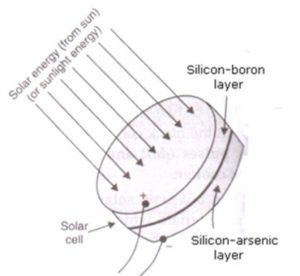 The solar cell is covered with a glass cover or a transparent plastic cover for protection. When sunlight falls on the surface of solar cell, it makes the loosely held electrons in the silicon atoms move due to which a current begins to flow in the wires connected to the top and bottom of the solar cell. The strength of current produced depends on the brightness of the light and the efficiency of solar cell. A potential difference of about 0.5 V is generated between the top and bottom surface of a solar cell.

Solar cell panels are mounted on specially designed inclined roofs so that more solar energy (or sunlight) is incident on them.

Solar cell panels can provide at all those places where the usual electricity is not available.

1) They have no moving parts

2) They require almost no maintenance.

3) They work quite satisfactorily without the use of any light focussing device.

4) They can be set up in remote, inaccessible and very sparsely inhabited areas where the laying of usual power transmission lines is difficult and expensive.

1) They are very expensive. This is due to the following

2) Solar cells have low efficiency. They can convert only about 25 per cent of the light energy falling on them into electricity.

3) The solar cells cannot work at night (when sunlight is not available). So, the electricity produced by a solar cell panel during the day time can be stored by charging a battery (like a car battery) and then used at night to power lights.

1 Solar cells are used for providing electricity in artificial satellites and space probes.

2 Solar cells are used for providing electricity to remote, inaccessible and isolated places where normal electricity transmission lines do not exist.

3 They are used for the transmission of radio and television programmes in remote areas.

4 Solar cells are used for providing electricity to light houses situated in the sea and to off-shore oil drilling rig platforms.