Question 2 What is nuclear fission reaction? Write the equation involved?

Question 4 In nuclear power plant how can we control the rate of fission?

Question 8 Of what material are control rods of nuclear reactor made? What is the function of control rods?

Question 9 Name the moderator used in nuclear reactor? What is its function?

A physical reaction which involves changes in the nucleus of an atom is called a nuclear reaction.

The energy released during a nuclear reaction is called nuclear energy (because it comes from the nucleus of an atom).

Nuclear energy can be obtained by two types of nuclear reactions:

(i) Nuclear fission, and

A small amount of mass of nucleus is destroyed during a nuclear reaction which gets converted into a tremendous amount of energy. The nuclear energy is released mainly in the form of heat (and some light).

The process in which the heavy nucleus of a radioactive atom (such as uranium, plutonium or thorium) splits up into smaller nuclei when bombarded with low energy neutrons, is called nuclear fission.

The sum of masses of the smaller nuclei formed in a fission reaction is a little less than that of the mass of the original heavy nucleus. So, there is a small loss of mass in the nuclear fission process which appears as a tremendous amount of energy. Nuclear fission is carried out by bombarding the heavy nuclei with low energy neutrons which are also called slow moving neutrons.

When uranium-235 atoms are bombarded with slow moving neutrons, the heavy uranium nucleus breaks up to produce two medium-weight atoms, barium-139 and krypton-94, with the emission of 3 neutrons. A tremendous amount of energy is produced during the fission of uranium.

This fission reaction can be represented in the form of a nuclear equation as:

When a nuclear fission reaction is carried out in the presence of boron rods, the excess neutrons produced during successive fissions of uranium-235 atoms are absorbed by boron rods and hence not available to cause further fission. Due to this a controlled fission reaction of uranium-235 takes place liberating heat energy at a slow, steady and manageable rate which can be used for generating electricity at a nuclear power plant. 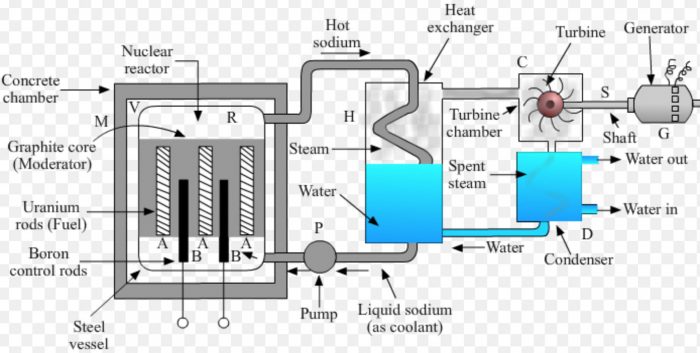 A power plant in which the heat required to make steam and turn turbines (to drive generators for making electricity) is obtained by nuclear reactions, is called a nuclear power plant.

(1) In a nuclear power plant, the fission of nuclear fuel uranium-235 is carried out in a steel pressure vessel V of reactor R.

(2) The enriched uranium-235 rods marked A (called fuel elements) are inserted in a core made of graphite blocks inside the reactor. Graphite is called a moderator. It slows down the speed of neutrons to make them fit for causing fission.

(3) In-between the uranium rods are inserted boron rods B. Boron rods are called control rods because they absorb excess neutrons and prevent the fission reaction from going out of control. Boron rods can be raised or lowered in reactor from outside.

(4) The reactor is enclosed in a concrete chamber M having thick walls to absorb the nuclear radiations.

(5) Liquid sodium (or carbon dioxide gas) is used as a coolant to transfer the heat produced in the reactor by fission to heat exchanger (or boiler) for converting water into steam.

Working of a Nuclear Power Plant

(1) The controlled fission of uranium-235 in the nuclear reactor produces a lot of heat energy.

(2) Liquid sodium (or carbon dioxide gas) is pumped continuously through the pipes embedded in reactor by using a pump P.

(3) Sodium absorbs the heat produced in the reactor. This extremely hot sodium is then passed into the coil of the heat exchanger H containing water.

(4) Water absorbs heat from hot sodium and boils to form steam. The hot steam at high pressure is introduced into a turbine chamber C having a turbine.

(5) The pressure of steam makes the turbine rotate. The shaft S of turbine is connected to a generator G.

(6) When the turbine rotates, its shaft also rotates and drives the generator. The generator produces electricity.

(8) This water is again sent to the heat exchanger for forming fresh steam. A nuclear power plant can work day and night for two to three years with the same uranium fuel.

The waste materials (called nuclear wastes) which are produced by the fission of uranium-235 during the generation of electricity at a nuclear power plant are radioactive and hence extremely harmful to all living beings, plants as well as animals, including human beings

The highly destructive nuclear bomb (or atom bomb) is based on the nuclear fission reactions of uranium-235 or plutonium-239.

The fission reaction of uranium-235, (or plutonium-239) is deliberately allowed to go out of control so as to produce an enormous amount of energy in a very short time. This energy causes destruction all around.

The atom bombs based on the fission of uranium-235 and plutonium-239 were dropped on the Japanese cities of Hiroshima and Nagasaki, respectively in 1945 during the second world war.

Einstein said that mass and energy are equivalent, and are related by the equation:

where E is the amount of energy produced if mass m is destroyed, and c is the speed of light (in vacuum).

In the mass-energy equation, if we put the mass in kilograms (kg), and the speed of light in metres per second (m/s) , then the energy will come in joules (J).

The energy released in nuclear reactions is expressed in the units of ‘electron Volt’ (eV) or Million electron Volt (MeV).

1 electron volt is the amount of energy acquired by an electron (having a charge of 1.602 x 10-19 coulombs) when accelerated through a potential difference of 1 volt.

The Value of Atomic Mass Unit in Terms of Energy