Question 1 What is a fuel? Give few examples?

Question 2 What are the characteristics of an ideal fuel or good fuel?

Question 3 What is a source of energy?

Question 4 State four characteristics of a good source of energy?

Question 5 What is meant by renewable sources of energy? Give few examples?

Question 6 What is meant by non- renewable sources of energy? Give few examples?

Question 7 Why are fossil fuels classified as non-renewable sources of energy?

Question 10 What is meant by calorific value of a fuel?

A source of energy is one which can provide adequate amount of energy in a convenient form over a long period of time. All the sources of energy can be divided into two main categories:

For example: Coal is a non-renewable source of energy because coal has accumulated in the earth over a very, very long time, and if all the coat gets exhausted, it cannot be produced quickly in nature.

For example: Wood is a renewable source of energy because if trees are cut from the forests for obtaining wood, then more trees will grow in the forest in due course of time. So, the loss of wood by cutting trees is made good by nature.

Whenever work has to be done, energy is needed. This energy is supplied by a source of energy. Different sources of energy are used depending on the type of work to be done.

A good source of energy is one:

(1) which would do a large amount of work per unit mass (or per unit volume),

(2) which is cheap and easily available,

(3) which is easy to store and transport,

(4) which is safe to handle and use, and

(5) which does not cause environmental pollution.

The most common sources of energy available to us are the fuels.

The materials which are burnt to produce heat energy are known as fuels.

Examples of fuels are: Diesel and Petrol.

Fuels are the concentrated store-house of energy. This energy is released in the form of heat when the fuels are burnt. Different fuels produce different amounts of heat on burning. Some fuels produce more heat whereas others produce less heat.

For example : When one gram of a carbon fuel (like charcoal) is burned completely, it produces about 33000 joules of heat, so the calorific value of charcoal is 33000 joules per gram or 33000 /g. 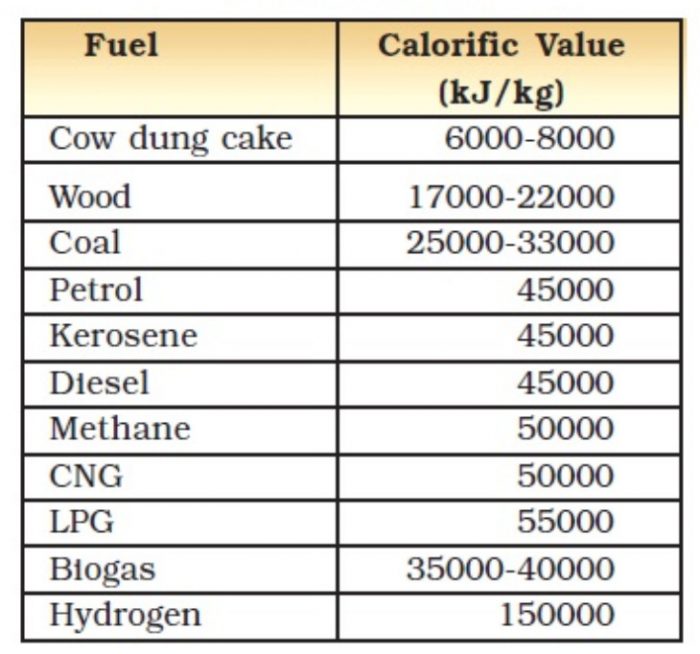 Hydrogen gas has the highest calorific value of 150 kilojoules per gram Thus, because of its high calorific value, hydrogen is an extremely good fuel.

Characteristics of an Ideal Fuel (or Good Fuel)

(1) It should have a high calorific value: An ideal fuel (or good fuel) is that which gives us more heat per unit mass.

(2) It should burn without giving out any smoke or harmful gases: An ideal fuel (or good fuel) is that which does not pollute air on burning by giving out smoke or poisonous gases.

(4) It should be cheap and easily available: An ideal fuel (or good fuel) is that which is not expensive and which is available in plenty everywhere.

(5) It should be easy to handle, safe to transport, and convenient to store: An ideal fuel (or good fuel) is that which does not create any safety risks during handling, during its transportation from one place to another or during its storage.

(6) It should not leave much ash behind after burning: An ideal fuel (or good fuel) should have low percentage of non-volatile materials which do not burn, so that it may burn completely without leaving much ash.

(7) It should burn smoothly: An ideal fuel (or good fuel) should have a moderate rate of combustion, and burn at a steady rate. The fuel should not burn either too fast or too slow.

On burning, fuel A produces gases like CO2, H2O, CO, SO2, SO3 etc. whereas fuel B produces only CO2 and H2O. Out of these gases carbon monoxide (CO), sulphur dioxide (SO2) and sulphur trioxide (SO3) are poisonous gases or harmful gases. Now, since fuel A produces poisonous gases like CO, SO2, and SO3, on burning, therefore, fuel A is not a good fuel. Burning of fuel B produces only harmless products like carbon dioxide (CO2) and water vapour (H2O), so fuel B is a better fuel.