Question 1 What is geothermal energy?

Question 2 What is the source of heat contained in geothermal energy?

Question 3 How geothermal energy is used to generate electricity?

Question 6 Explain how tidal energy can be used to generate electricity?

Question 7 Why is tidal energy not likely to be a potential source of energy?

Question 8 State two ways in which energy of sea waves can be harnessed?

Question 9 What is meant by Ocean Thermal Energy?

Question 10 Explain how Ocean Thermal Energy can be used to generate electricity?

Question 11 Name any three forms of energy which could be harnessed from the sea?

Energy from the sea

The energy from the sea can be obtained mainly in three forms. 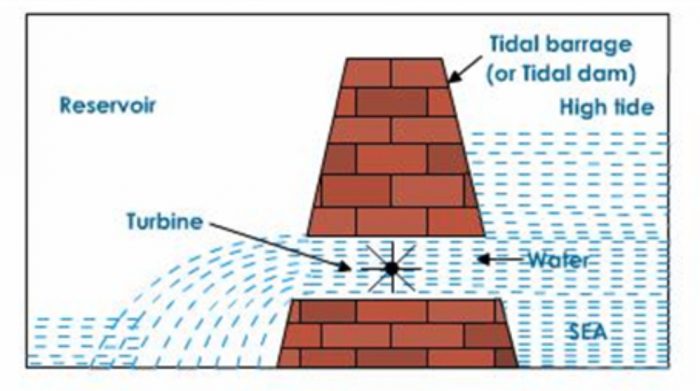 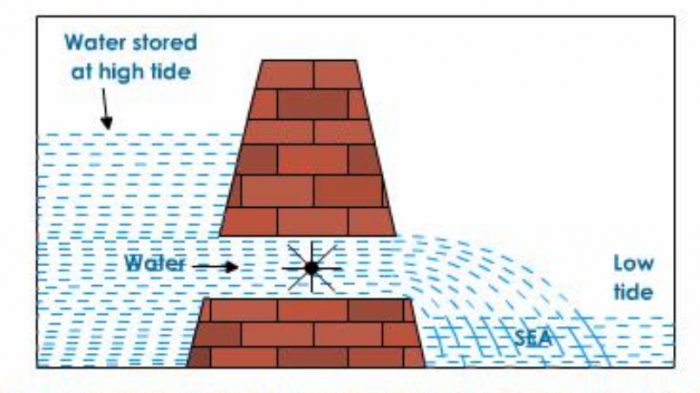 The rise of sea water due to gravitational pull of the moon is called high tide whereas the fall of sea water is called low tide. The tidal waves in the sea build up and recede (rise and fall) twice a day.The enormous movement of water between the high tides and low tides provides a very large source of energy in the coastal areas of the world. The tidal energy can be harnessed by constructing a tidal barrage or tidal dam across a narrow opening to the sea.

(1) During high tide, when the level of water in the sea is high, sea-water flows into the reservoir of the barrage and turns the turbine.

The tidal energy is not likely to be a potential source of energy in future because of the following reasons:

(1) There are very few sites around the world which are suitable for building tidal barrages (or tidal dams).

(2) The rise and fall of sea-water during high and low tides is not enough to generate electricity on a large scale.

Wave energy means sea waves energy. Due to the blowing of wind on the surface of sea, very fast sea-waves move on its surface. Due to their high speed, sea-waves have a lot of kinetic energy in them. The energy of moving sea waves ca be used to generate electricity.

A variety of devices have been developed to trap sea wave energy to turn turbines and drive generators for the production of electricity.

(i) Set-up floating generators in the sea. These would move up and down with the sea-waves. This movement would drive the generators to produce electricity

(ii) Let the sea-waves move up and down inside large tubes. As the waves move up , the air in the tubes is compressed. This compressed air can then be used to tum a turbine of generator to produce electricity.

The energy available due to the difference in the temperature of water at the surface of the ocean and at deeper levels is called ocean thermal energy (OTE).

The devices used to harness ocean thermal energy are called Ocean Thermal Energy Conversion power plants (or OTEC power plants). A temperature difference of 20°C (or more) between the surface water of ocean and deeper water is needed for operating OTEC power plants.

(1) In one type of OTEC power plant the warm surface water of ocean is used to boil a liquid like ammonia or a chlorofluorocarbon.

(2) The high pressure vapours of the liquid (formed by boiling) are then used to turn the turbine of a generator and produce electricity.

(3) The colder water from the deeper ocean is pumped up to cool the used up vapours and convert them again into a liquid. This process is repeated again and again.

Advantage of the ocean thermal energy is :

(1) It can be used continuously 24 hours a day throughout the year.

(2) Ocean thermal energy is a renewable source of energy and its use does not cause any pollution.

Geo’ means ‘earth’ and ‘thermal’ means ‘heat. Geothermal energy is the heat energy from hot rock present inside the earth.

(1) The extremely hot rocks present below the surface of earth heat the underground water and turn it into steam.

(2) As more and more steam is formed between the rocks, it gets compressed to high pressures.

(3) A hole is drilled into the earth up to the hot rocks and a pipe is put into it. The steam present around the hot rocks comes up through the pipe at high pressure.

(4) This high pressure steam turns the turbine of a generator to produce electricity.

(5) Sometimes two holes are drilled into the earth in the region of hot rocks and two pipes are put into them.

(6) Cold water is pumped in through one of the pipes. This cold water is turned into steam by the hot rocks. The steam thus formed comes out through the other pipe and used to generate electricity.

(2) The use of geothermal energy does not cause any pollution. So, it is a clean and environment friendly source of energy.

(1) Geothermal energy is not available everywhere. It is available only in those areas where there are hot rocks near the earth’s surface.

(2) Deep drilling in the earth to obtain geothermal energy is technically very difficult and expensive.

Two places where geothermal energy can be exploited on commercial scale are located in Madhya Pradesh and Himachal Pradesh.