Actual Investment: The actual amount of investment is called an actual investment.

Barter System: Barter refers to the direct exchange of goods and services. In this way, the barter system refers to the system by which one commodity is exchanged for another without the use of money.

​Cheque: A cheque is a paper instructing the banks in writing to pay a specific amount from the person’s account to the person in whose name the cheque has been issued.

​Collateral: Collateral is the security provided by a borrower (such as land, building, vehicle, livestock, deposits with banks) against a loan, and it can be sold in case of non-payment of loan.

Commercial Bank: A commercial bank is an establishment for safe custody of money, which it pays out on customer’s demand order or otherwise. In other words, institutions accepting deposits and issuing loans are called commercial banks.

​Deferred Payments: Payments which are to be made in the future are known as deferred payments.

​Fixed Deposits: These are deposits for a fixed term varying from a frequency of a few days to a few years.

​Investment: Investment is the amount of money spent with the intention of earning income at regular intervals (in the form of return from funds invested) or in the long run (in the form of capital appreciation).

​Loans: A loan is usually given for a specific duration of time and needs to be completely repaid by a specified date.

Money:  Money may be anything chosen by common consent as a medium of exchange. It can be in the form of coins and bank notes collectively.

Token coins: Token coins are the coins where value as money is far above the value of metal contained in it.

Different phases of medium of exchange are:

(i) Ancient phase: It is the time before the introduction of coins.

(ii) Medieval phase: After the barter system, in came the use of metallic coins like gold, silver and copper coins.

(iii) Modern phase: In the modern phase, currency like– paper notes and coins are used as a medium of exchange.

The modern forms of money are ​Paper currency ​, ​Coins ​, ​Demand deposits ​ and ​Cheques.

Money acts as an intermediate in the exchange process and eliminates the need for double coincidence of wants. As money acts as intermediate, it is also called medium of exchange.

(a) A person holding money can easily exchange it for any commodity or service that he or she wants. Everyone prefers to receive payments in money and exchanges the money for things he wants.

(b) Overcomes the problem of double coincidence of wants.

(c) Acts as a medium of deferred payment.

Modern currency or rupee is accepted as a medium of exchange because:

(i)​ Modern currency is authorised by the government of a country.

​(ii)​ In India, the Reserve Bank of India issues all currency notes on behalf of the central government.

​(iii)​ No other individual or organisation is allowed to issue currency.

​(iv)​ The law legalises the use of rupee as a medium of payment that cannot be refused in settling transactions in India.

​(v)​ No individual in India can legally refuse a payment made in rupees.

Use of money in Modern Times

(i)​To buy goods and services like in market, money can be used to buy clothes, vegetables, etc.

​(ii)​To deposits in banks so that money can be saved and used for future use.

​(iii)​As a store value. For instance, we cannot store perishable goods like milk, grain, etc., to exchange goods in future. However, we can buy precious metals like gold and save it for future use.​

The deposits in the bank accounts can be withdrawn on demand, so these deposits are called demand deposits.

(i) ​Banks accept the deposits and also pay an interest rate on the deposits. In this way, people’s money is safe with the banks and it also earns interest.

​(ii)​ The facility of cheques against demand deposits makes it possible to directly settle payments without the use of cash. Since demand deposits are accepted widely as a means of payment, along with currency, they constitute money in the modern economy.

​(iii) ​It is authorised by the government of the country.

A major portion of the remaining deposits is used by banks to give loans to people. The depositors of a bank are allowed to withdraw their deposits on demand and are paid interest on their deposits. The borrowers taking loans to repay it to the bank along with interest.

(i) ​Dependence on informal sources of credit reduces.

​(iii)​ To save rural people from exploitation.

​(iv) ​It is important that the formal credit is distributed more equally so that the poor can benefit from the cheaper loans.

​(v) ​The bank and the cooperative societies have to increase the lending facilities to improve the livelihood of the people in the rural areas.

Most of the poor households are still dependent on informal sources of credit because:

(i) Banks are not present everywhere in rural India, whereas informal sources are easily available in all villages.

(ii)​ Getting a loan from a bank is much more difficult for poor people than taking a loan from the informal resources, because bank loans require proper documents and collaterals.

​(iii)​ Moneylenders provide a loan to poor people without any collateral.

(v)​ Other informal sources of credit are friends and relatives, or traders and landlords, who know the borrowers personally and therefore do not demand collateral.​

The loan given by a bank is also referred to as a credit. It includes interest rate, collateral, documentation and mode of repayment. However, the terms of credit vary depending upon the nature of lender, borrower and loan.

(2) ​Security against the loan to recover the money if the borrower fails to repay it. This security is called collateral. ​

(3) ​The assets accepted as collateral are land or property, vehicles, livestock, standing crops and bank deposits. ​

(4) ​A borrower needs to submit certain documents like proofs of identity, residence, employment and income to avail a loan. ​

(5) The lender reserves the right to sell the collateral in case of non-repayment to recover the loan amount.

Credit plays a vital and positive role as :

(i)​ Credit helps people from all walks of life in setting up their business, increase their income and support their families.

​(ii)​ To some people, loan helps a lot in constructing their houses and get relief from monthly rent.

​(iii)​ To others, it helps a lot in raising their standards of living.

​(iv) Credit helps him and he is able to increase his earnings.

Collateral is an asset that the borrower owns (such as land, building, vehicles, livestock etc.) and uses this as a guarantee to the lender until the loan is repaid.

There are 2 types of credits :

(a) Formal  : Formal credit is generally available with the banks and cooperatives. They charge lesser rates of interest than informal institutions. The Reserve Bank of India (RBI) supervises the functioning of the formal sources of loan.

​​Need to expand formal sources of credit are :

​(i)​ To save the poor farmers and workers from the exploitation by the informal sector credit.

​(ii) ​Informal sector charges a higher interest on loans which means that a large part of the earnings is used to repay the loan.

​(iii)​ Formal credit can fulfil various needs of the people by providing cheap and affordable credit.

(b) Informal Credit : Informal lenders include moneylenders, traders, employers, relatives and friends, etc. They charge much higher interest on loans. There is no one to stop them from using unfair means to get their money back. 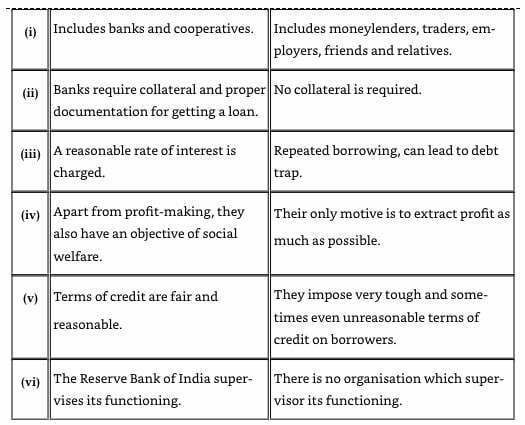 Banks play an important role in developing the economy of India :

​(i) ​They keep the money of the people in their safe custody.

(ii)​ They give interest on the deposited money to the people. ​

(iii)​ They mediate between those who have surplus money and those who are in need of money. ​

(iv)​ They provide loan to a large number of people at the low interest rate.

​(v)​ They promote agricultural and industrial sector by providing loans. ​

(vii) Banks accept deposit and also pay an amount as interest and in this way people earn money.

(viii) Credit provided by the banks for government projects helps in the development of the nation.

(ix) It is easy for individuals to get credit who have savings and current account in the banks.

Importance of cheap and affordable credit for the country’s development :

​(i) ​Cheap and affordable credit would lead to higher income. ​

(ii)​ Many people could borrow for a variety of needs

​(iii)​ It encourages people to invest in agriculture, do business and set up small scale industries etc.

​(iv)​ It enables more investment which will lead to the acceleration of economic activities.

​(v)​ Affordable credit would also end the cycle of the debt trap.

Formal Sector Loans: Include loans from banks and cooperatives.

Features of formal sector loans are :

(i)​ Formal sectors provide cheap and affordable loans and their rate of interest is monitored by Reserve Bank of India.

​(ii)​ Formal sector strictly follows the terms of credit, which include interest rate, collateral, documentation and the mode of repayment.

​(i) ​Their credit activities are not governed by any organisation, therefore they charge a higher rate of interest.

Reserve Bank of India (RBI) supervises the banks in the following ways: ​

(i) ​It monitors the balance kept by banks for day-to-day transactions.

(ii)​ It checks that the banks give loans not just to profit-making businesses and traders, but also to small borrowers.

​(iii)​ Periodically, banks have to give details about lenders, borrowers and interest rate to RBI.

Credit activities of the informal sector should be discouraged: ​

(i)​ Most loans from informal lenders carry a very high interest rate and do little to increase the income of the borrowers.

(iii)​ 85% of the loans taken by poor households in the urban areas are from informal sources.

(iv)​ Cheap and affordable credit is crucial for the country’s development.