Question 2 How does valency vary in a group?

Question 3 How does valency vary in a period?

Question 4 What is meant by atomic size?

Question 5 How does atomic size vary in a group and period?

Question 7 How does metallic character vary in a group and period?

Question 8 What is meant by electronegativity of an element?

The combining capacity of the elements is known as valency.

Valency is also defined as combining capacity of the atom of an element with the atoms of other elements in order to acquire 8 electrons.

The valency of an element is linked with the electrons already present in its valence shell and the electrons which it actually needs.

2) The atoms having 5, 6 or 7 valence electrons generally take up 3, 2 or 1 electrons respectively from the atoms of other elements and show valencies of 3, 2 or 1.

Electronic configuration of first twenty elements and their respective valencies. 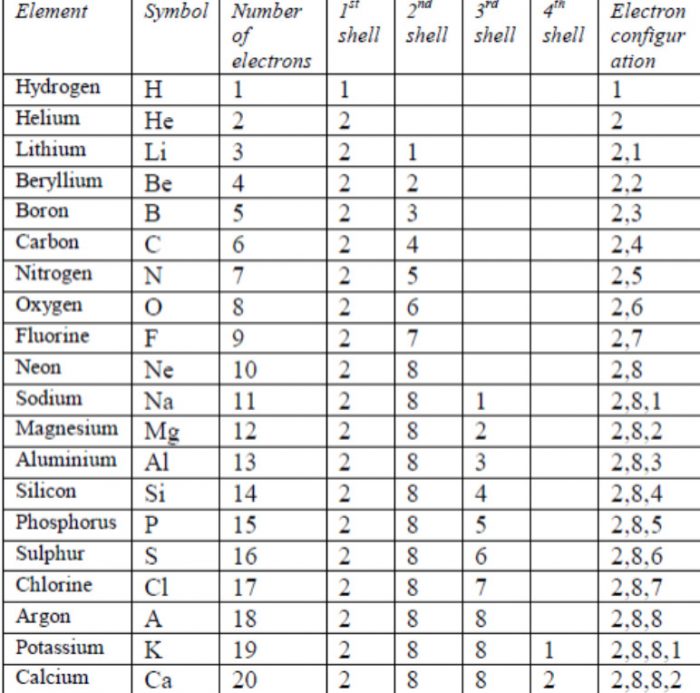 Variation of Valency in a Group

All the elements present in a group have the same electronic configuration of their atoms. They have therefore, the same valency.

For example: All the elements present in group 1 have valency equal to one.

All the elements present in group 2 have valency equal to two.

Variation of Valency in a Period

Since the elements present in a period do not have the same number of valence electrons, they do not show same valency. In a period the elements have different valencies.

The distance from the centre of the nucleus of an isolated atom from the outermost shell containing the electrons is known as Atomic Size.

Variation in a group

In a group, the atomic size or atomic radius increases downwards. In a group, as we move from one element to the other, there is always an increase in number of electron shells by one.

For example : The element Li (Z=3) has two shells (2, 1) while the next element Na (Z=11) has three shells (2, 8, 1). With the increase in the electron shells, the distance between the centre of the nucleus and the electrons present in the valence shell increases. Therefore, the atomic size or atomic radius increases.

Variation in a Period

1) Metals are present on the left side as well as in the centre of the periodic table.

2) Non-metals are located on the right side of the periodic table.

3) Metalloids constitute some border line elements and are shown by zig-zag line.

The metallic character of the elements is due to their electron releasing tendency. By losing electrons, metal atoms change to positive ions (cations). These are therefore, electropositive in nature.

1) Down the group, the metallic character increases because the electron releasing tendency of the atoms tends to increase.

2) Along a period, the metallic character decreases because the electron releasing tendency of the atoms tends to decrease.

The non-metallic character of the elements is due to their electron accepting tendency. By accepting electrons, non-metal atoms change to negative ions (anions). These are therefore, electronegative in nature.

1) Down the group, the non-metallic character decreases because electron accepting tendency of the atoms tends to decrease due to their increased size.

2) Along a period, the non-metallic character increases because electron accepting tendency of the atoms tends to increase due to their decreased size.

Electronegativity of an element may be defined as the relative electron attracting tendency of its atom for a shared electron pair in a covalent bond with other atom.

For example: In hydrogen chloride molecule (H :Cl), chlorine atom is more electronegative than hydrogen since it has greater attraction for the shared electron pair.

Electronegativity of the elements decreases down the group and increases along a period.