You are here: Home / Class 10 / Magnetic Effects of Electric Current / Magnetic Field due to a current through a straight conductor

Question 1 On what factors does the intensity of magnetic field due to current carrying conductor depends?

Magnetic  Field due to a current through a straight conductor 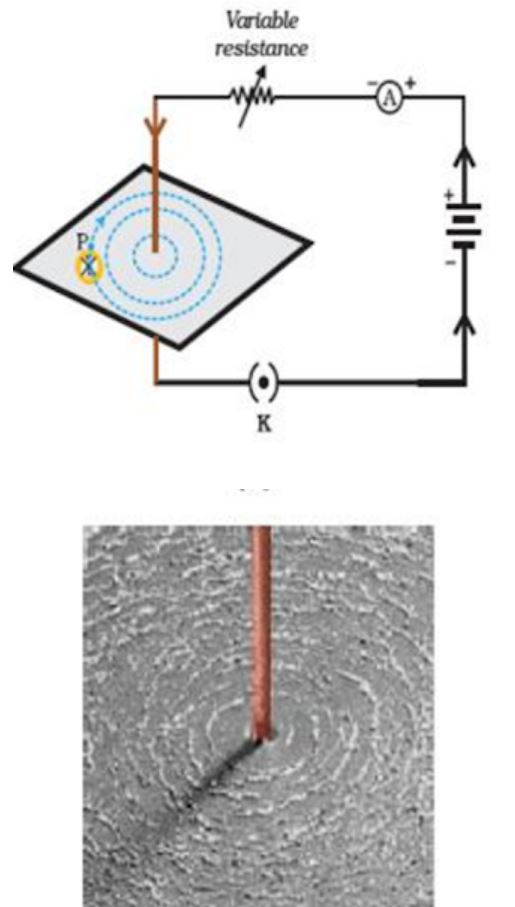 (2) Insert the thick wire through the centre,normal to the plane of a rectangular cardboard.Take care cardboard is fixed and does not slide up or down.

(3) Connect the copper wire vertically between the point X and Y in series with battery,plug and key.

(4) Sprinkle some iron filling uniformly on the cardboard.

(5) Keep the variable of the rheostat at a fixed position and note the current through the ammeter.

(6) Close the key so that a current flows through the wire.Ensure that the copper wire placed between the points remain vertically straight.

(7) Gently tap the cardboard a few times.Observe the pattern of the iron filling.They will show a pattern of concentric circles around the copper wire.

(8) Place a compass at a point over a circle.Observe the direction of the needle.

Intensity of magnetic field due to current carrying conductor depends on:

(1) Amount of current flowing through conductor

If the current flowing conductor increases,then deflection of needle of magnetic compass placed near conductor also increases and vice versa.