You are here: Home / Class 10 / Magnetic Effects of Electric Current / Force on a current carrying conductor in a magnetic field

Force on a Current carrying Conductor in a Magnetic Field

When a current carrying conductor is placed in a magnetic field, the conductor experiences a force. 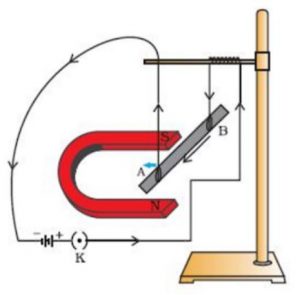 (2) Place a strong horse-shoe magnet in such a way that the rod lies between the two poles with the magnetic field directed upwards. For this the north pole of the magnet vertically below and south pole vertically above the aluminium rod.

(3) Connect the aluminium rod in series with a battery, a key and a rheostat.

(4) Now pass a current through the aluminium rod from end A to end B.

(5) It is observed that the rod is displaced towards the left. The rod gets displaced.

(1) Force is exerted on current carrying Al rod when it is placed in a magnetic field.