Question 1 What are luminous objects. Give example?

Question 2 What are non-luminous objects. Give example?

Question 3 State the laws of reflection?

Question 4 What is beam of light?

Question 6 What is a real image?

Question 7 What is a virtual image?

Question 8 Write the properties of  images formed by plane mirror?

Those objects which emit their own light are called as luminous objects.

Those objects which do not emit their own light are called as non-luminous objects.

If an object neither emit light nor reflects the light falling on it, then that object is not visible to us.

Light travel in a straight line which is represented by Ray of light.

A group of parallel rays of light emitted by source of light is called beam of light.

The phenomenon of bending of light when it goes from one medium to another medium is called refraction.

The phenomenon of bending of light around the corners of an opaque object is called diffraction. 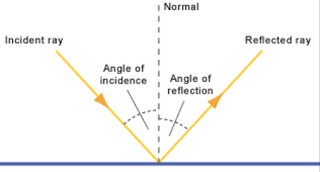 The phenomenon of returning of light in the same medium after striking a surface is called Reflection of light.

1) Angle of incidence is equal to angle of reflection.

2) Incident ray, reflected ray and normal to the reflecting surface at the point of incidence lie in the same plane.

1) Image is virtual and erect.

2) Size of image formed is equal to size of object.

Real Image : When ray of light after reflection meet at a point. It can be obtained on screen, always inverted, formed in front of mirror.

Virtual Image : When ray of light after reflection, do not meet at a point but appears to meet at a point. It cannot be obtained on screen, formed behind the mirror, erect.