Question 2 The image formed by a convex mirror is seen to be erect, virtual and diminished. What is the position of the object?

(1) Object is between infinity and pole 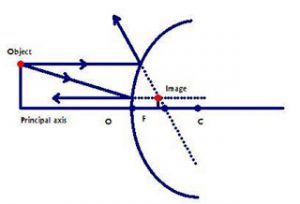 (a) Image is formed between pole and focus.

(b) It is erect, virtual, diminished.

(2) Object is at infinity

(a) Image is formed at focus, behind the mirror

(b) It is virtual, erect and diminished.

(1) It is used in driver’s mirror or for rear view.